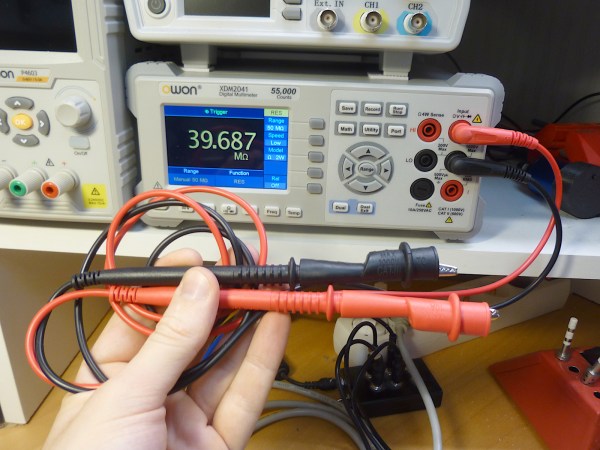 After purchasing an Owon XDM2041 bench multimeter for an automated test setup, [Petteri Aimonen] was disappointed to find that at especially the higher mega Ohm ranges, the measured values were jumping around a lot and generally very inaccurate. Since this is an approximately $170 bench multimeter and Owon support wasn’t cooperating, [Petteri] set out to fix the issue, starting with a solid teardown. 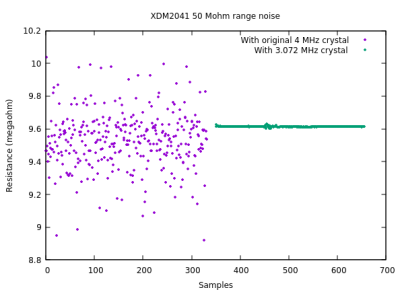 As noted by [Petteri], there’s not a whole lot inside one of these multimeters. The main board with the guts of the whole system contains a GigaDevices GD32F103CBT6 MCU coupled with the star of the show: the HYCON Technology Corporation’s HY3131 multimeter chip. After a peek at the HY3131 datasheet, the culprit was quite apparent: while sampling the presence of mains voltage noise is usually suppressed through the selection of an appropriate crystal.

Unfortunately, instead of the recommended 4.9152 MHz crystal per the reference schematic for the HY3131, Owon’s engineers had apparently opted for a 4 MHz crystal instead, and so it’s essentially aliasing the line noise.

[Petteri] figured that the resulting sampling timing might work well enough with 60 Hz line frequency, but clearly with 50 Hz there was a lot of noise sneaking into the measurements. After swapping the crystal with a 3.072 MHz one, there was a marked improvement, as the plot shows.