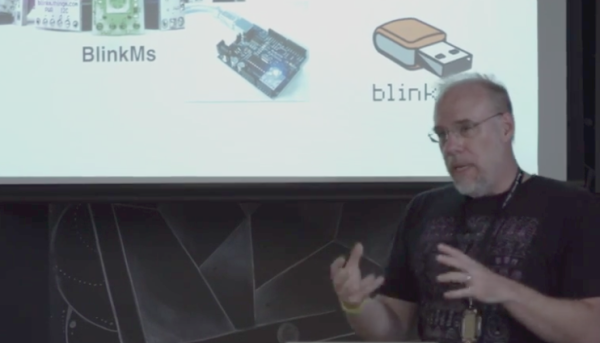 Tod Kurt knows a thing or two about IoT devices. As the creator of blink(1), he’s shipped over 30,000 units that are now out in the wild and in use for custom signaling on everything from compile status to those emotionally important social media indicators. His talk at the 2016 Hackaday SuperConference covers the last mile that bridges your Internet of Things devices with its intended use. This is where IoT actually happens, and of course where it usually goes astray.

END_OF_DOCUMENT_TOKEN_TO_BE_REPLACED

There were two LA hackerspaces represented at our 10th anniversary party, and members from both of them were able to give a talk on the projects coming out of their labs. [Arko] from null space labs showed up with a few of his creations including CUBEX, his high altitude balloon payload and a demoscene board he’s been working on. [Tod] from Crashspace showed up with the rest of the Crash crew and helped out with the morning build-offs and labs.

Demoscenes, for one reason or another, aren’t extremely popular in the US. In Europe, you can find teams working on programatically generated music videos year-round, coded for Commodore 64s, Amigas, even stranger computers, and x86 assembly. There’s an art to the whole thing, but for those of us on this side of the pond, there aren’t many venues to demonstrate impeccable graphics programming skill.

[Arko] wants to change this. He’s designed a demoscene board around a PIC micro with hardware graphics acceleration, USB OTG, VGA out at 640×480, and an audio out port. It’s meant to be a platform to create demos on, and already [Arko] to his platform. Edit: the Craft demo was playing on the older ATmega88 version of the board. The PIC board is a little more capable.

Being that there are so few Demo parties in the US, only building a board to play demos would be just a bit shortsighted. [Arko]’s main reason for giving this talk was to tell everyone about the LayerOne Demoparty next year just a few miles from the Hackaday Hackaspace. It coincides with the LayerOne conference, and the board itself will soon be available for sale in the Hackaday store.

Blink(1) and How To Kickstarter

When it comes to electronics and tech Kickstarters, Blink(1) defines what it means to have a minimum viable product. It’s a USB plug, a small microcontroller, and an RGB LED. That’s it. [Tod] wanted to take this simple project and learn how to turn it into a product. [Tod] emphasised the ‘learn’ part of his plan; the alternate title for this talk was, “How to Fail Multiple Times and Still Ship 20,000 Units.”

The Blink(1) started as a standard My First Arduino Sketch, blinking three LEDs, quickly moving over to a USB LED device. This rather large USB dongle sat there for a few years until he decided to turn this into a product. It turned out building a product is a lot more involved than building a kit, with considerations to the enclosure, the packaging, and the inevitable CNC mold fails. Assembly – and the success of his first Kickstarter – was also an issue. [Tod]’s friends ended up assembling most of the kits.

Despite these problems, [Tod] was still able to ship a few thousand units and is now working on another production run with SeeedStudio. It’s a remarkable story, with the Blink(1) used by Google, Disney, Microsoft, Facebook, and a whole bunch of other huge companies. The Blink(1) is also in the mainline Linux kernel, something you can’t say about a lot of Kickstarters out there.

One of the benefits of writing for Hackaday is the ability to command at will a legion of readers to descend on unsuspecting web servers. Most of the time a server can handle the load of thousands of connections. On the rare occasion, though, a server is turned into a pile of slag and dross to the satisfaction of us here at Hackaday and to the ire of admins everywhere.

Checking to see if your server is still running or not isn’t terribly interesting, though. [Eric] thought it would be cool to have a proper physical visualization of how busy his server is, and ended up using a blink(1) USB-controllable LED to display his current server load.

The blink(1) is a small, USB controlled RGB LED that can be used as a universal indicator light. [Eric] had the idea of plugging it in to one of his servers and having the brightness of the LED change in response to the load on the server. He did this with a Python script that queries the Google Analytics API and returns a value from 0 to 255 in response to how popular his server was in the last 10 minutes.

Of course, there’s always a chance Hackaday could Slashdot his server. In that case, the blink(1) glows a steady red, alerting [Eric] to his popularity.

[TodBot] has a new piece of hardware on the way up. His Blink(1) is currently about 50% funded on Kickstarter. It’s a USB nub that has an RGB LED inside of it. When plugged into a computer it can be used as a status indicator. At first that sounds like a let down, but his marketing is fantastic as the myriad of uses really caught our attention. If you’re on the road you can use it to report back your server statistic. Plug one into each rack-mounted servers for quick visual indication of which one has crashed. Or find your own use.

You probably remember [TodBot] as the creator of the BlinkM. Recently he was calling it the world’s smallest Arduino. Well this Blink(1) is being marketed as Arduino programmable as well. The board size is about the same, and both have an RGB LED module. The difference is that the BlinkM had an ATtiny85 and needed a serial converter to program it. This has a USB plug so we’d bet he’s swapped the tiny for an ATmega8u2 or something from the same family.

Don’t think one blinky LED is going to cut it? For folks that just need more resolution there are other hardware options out there. For instance, this project gives you a wireless 8×8 RGB led display to use as an indicator.