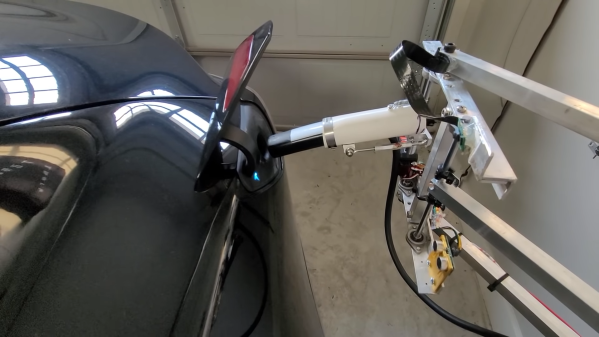 The HTC Vive’s Lighthouse localization system is one of the cleverest things we’ve seen in a while. It uses a synchronization flash followed by a swept beam to tell any device that can see the lights exactly where it is in space. Of course, the device has to understand the signals to figure it out.

[Alex Shtuchkin] built a very well documented device that can use these signals to localize itself in your room. For now, the Lighthouse stations are still fairly expensive, but the per-device hardware requirements are quite reasonable. [Alex] has the costs down around ten dollars plus the cost of a microcontroller if your project doesn’t already include one. Indeed, his proof-of-concept is basically a breadboard, three photodiodes, op-amps, and some code.

His demo is awesome! Check it out in the video below. He uses it to teach a quadcopter to land itself back on a charging platform, and it’s able to get there with what looks like a few centimeters of play in any direction — more than good enough to land in the 3D-printed plastic landing thingy. That fixture has a rotating drum that swaps out the battery automatically, readying the drone for another flight.

If this is just the tip of the iceberg of upcoming Lighthouse hacks, we can’t wait!

END_OF_DOCUMENT_TOKEN_TO_BE_REPLACED