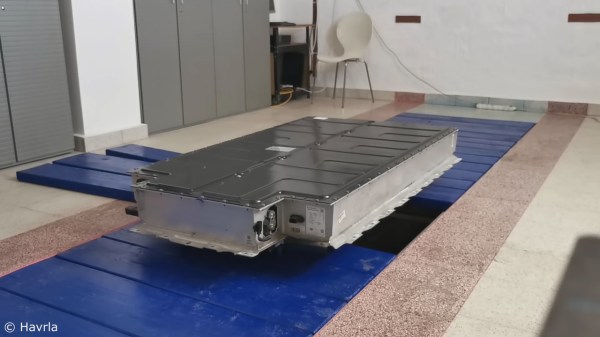 The BMW i3 debuted on the market in late 2013, one of the brand’s first electric cars. Also available with an optional range-extending engine, early models featured a 60 Ah battery providing up to 130km range on a full charge. However, times have changed, and over the years, BMW have updated the model with larger capacity batteries over the years. So what does it take to retrofit an older model with the newer, fatter, juicer 120 Ah pack?

It’s all helpfully laid out in a video by [Daniel], who notes that it’s not a job for the faint of heart or poorly equipped. The good news is that, mechanically, the newer batteries have the same external dimensions as the older packs, meaning they can be bolted in without requiring any cutting, welding or, adapters. But that’s about it for the good news. The batteries are cooled by the air conditioning system, meaning that removal and replacement means draining the system of refrigerant using highly expensive specialised hardware. Additionally, many batteries in crashed cars are disabled when the airbags are triggered for safety reasons, requiring unlocking through BMW’s proprietary software or replacement of the internal battery controller. Then there’s the usual laundry list of gradual changes that happen across any automotive line, meaning that certain model years and trim packages can have incompatible plugs and connectors or other features.

Overall, it can be quite a bit of work to do, and with the tools required, something that needs the services of a dedicated mechanic’s workshop. However, find an experienced shop that regularly works with EVs, and you might find they can facilitate the upgrade for you without too much fuss. We’ve seen [Daniel] tackle upgrades before, such as a much easier swap on the Nissan Leaf. Video after the break.

END_OF_DOCUMENT_TOKEN_TO_BE_REPLACED 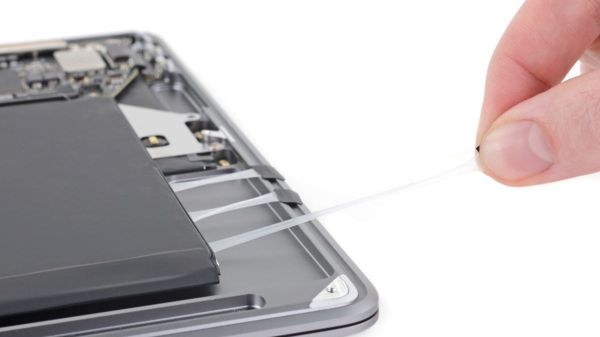 Anyone who enjoys opening up consumer electronics knows iFixit to be a valuable resource, full of reference pictures and repair procedures to help revive devices and keep them out of electronic waste. Champions of reparability, they’ve been watching in dismay as the quest for thinner and lighter devices also made them harder to fix. But they wanted to cheer a bright spot in this bleak landscape: increasing use of stretch-release adhesives.

Once upon a time batteries were designed to be user-replaceable. But that required access mechanisms, electrical connectors, and protective shells around fragile battery cells. Eliminating such overhead allowed slimmer devices, but didn’t change the fact that the battery is still likely to need replacement. We thus entered into a dark age where battery pouches were glued into devices and replacement meant fighting clingy blobs and cleaning sticky residue. Something the teardown experts at iFixit are all too familiar with.

This is why they are happy to see pull tabs whenever they peer inside something, for those tabs signify the device was blessed with stretch-release adhesives. All we have to do is apply a firm and steady pull on those tabs to release their hold leaving no residue behind. We get an overview of how this magic works, with the caveat that implementation details are well into the land of patents and trade secrets.

But we do get tips on how to best remove them, and how to reapply new strips, which are important to iFixit’s mission. There’s also a detour into their impact on interior design of the device: the tabs have to be accessible, and they need room to stretch. This isn’t just a concern for design engineers, they also apply to stretch release adhesives sold to consumers. Advertising push by 3M Command and competitors have already begun, reminding people that stretch-release adhesive strips are ideal for temporary holiday decorations. They would also work well to hold batteries in our own projects, even if we aren’t their advertised targets.

Our end-of-year gift-giving traditions will mean a new wave of gadgets. And while not all of them will be easily repairable, we’re happy that this tiny bit of reparability exists. Every bit helps to stem the flow of electronics waste. 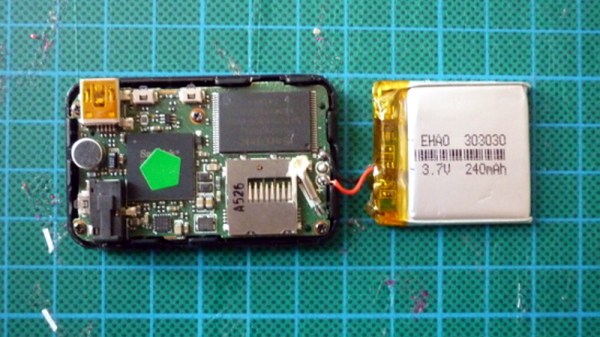 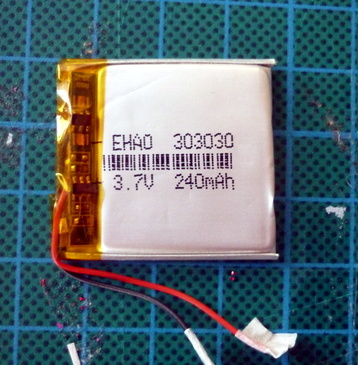 The HTC Vive’s Lighthouse localization system is one of the cleverest things we’ve seen in a while. It uses a synchronization flash followed by a swept beam to tell any device that can see the lights exactly where it is in space. Of course, the device has to understand the signals to figure it out.

[Alex Shtuchkin] built a very well documented device that can use these signals to localize itself in your room. For now, the Lighthouse stations are still fairly expensive, but the per-device hardware requirements are quite reasonable. [Alex] has the costs down around ten dollars plus the cost of a microcontroller if your project doesn’t already include one. Indeed, his proof-of-concept is basically a breadboard, three photodiodes, op-amps, and some code.

His demo is awesome! Check it out in the video below. He uses it to teach a quadcopter to land itself back on a charging platform, and it’s able to get there with what looks like a few centimeters of play in any direction — more than good enough to land in the 3D-printed plastic landing thingy. That fixture has a rotating drum that swaps out the battery automatically, readying the drone for another flight.

If this is just the tip of the iceberg of upcoming Lighthouse hacks, we can’t wait!