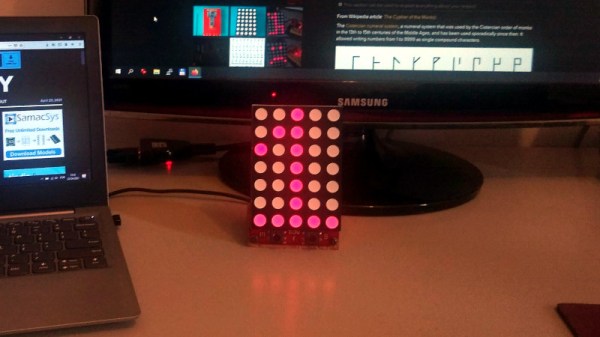 It’s rare for the fields of the engineer and the mediaevalist to coincide, but there’s a clock project bringing the two fields together. The Cistercian monastic order used an intriguing number system from the 13th century onwards that could represent any four-digit number as a series of radicals expressed in the four corners of a single composite symbol, and it’s this number system that’s used by the clock to render the full range of 24 hour time on a large 5×7 LED matrix mounted on a wooden base.

Behind the scenes is an Arduino and a DS3231 real-time clock, and all the code can be found in a handy GitHub repository. There’s even a PCB from everyone’s favourite vendor of purple PCBs, The result is certainly an interesting clock that makes the break from the usual binary and Nixie timepieces with some style. It also provides an introduction to this fascinating but obscure numerical system, in the event that any of us might have missed the one other such clock that has made it to these pages. 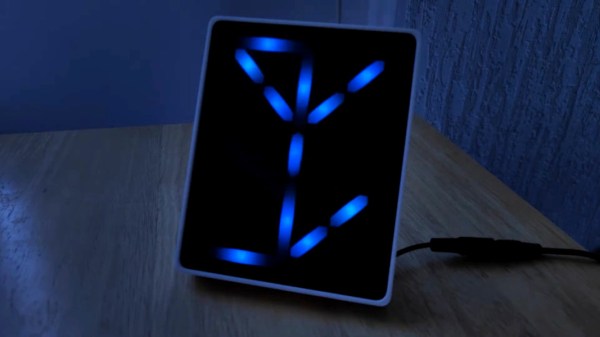 We were beginning to think we’d seen it all when it comes to RGB clocks, but [andrei.erdei] found a fast path back into our hearts and minds. This clock is a digital representation of an ancient numeral system used by 13th century Cistercian monks before the Indo-Arabic system that we know and love today took over. It’s a compact system (at least for numbers 1-9,999) that produces numerals which sort of look like 16-segment displays gone crazy.

Every numeral has a line down the middle, and the system uses the four quadrants of space around it to display the ones, tens, hundreds, and thousands positions starting in the upper right corner.

The timekeeping is done with an ESP-01, and there are a total of 31 RGB LEDs including the middle bit, which blinks like a proper digital clock and doubles as a second hand. As usual, [andrei] has provided everything you’d need to build one of these for yourself. We admit that the system would take a little time to learn, but even if you never bothered to learn, this would make a nice conversation piece or focal point for sitting and staring. Take a minute to check it out in action after the break.

We love a good clock build no matter how it works. Sink your teeth into this clock that’s driven by a tuning fork.