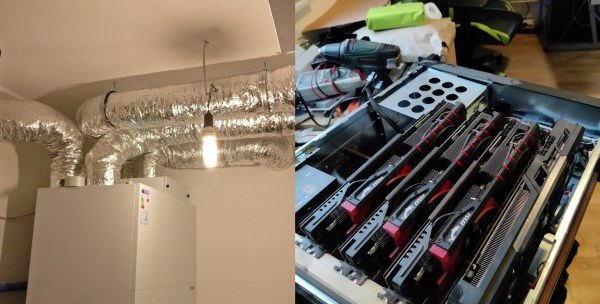 Wherever you are in the world, the chances are that a large portion of your utility bill is for heating. This was certainly the case for [Christian Haschek], who realized he can use a cryptocurrency mining rig to offset some of his heating costs.

[Christian]’s central ventilation and water heating is handled by a heat pump, which uses a lot of electricity, especially in the Austrian winter. When it draws in cool air, it first needs to heat it to the thermostat temperature before venting it to the house. Cryptocurrency mining rigs are also heavy electricity users, but they also produce a lot of heat, which can be used to preheat the air going to the heat pump. [Christian] had four older AMD R9 390 GPUs (equivalent to the Nvidia GeForce GTX 970) lying around, so he mounted them in a server case and piped the heat pump’s air intake through the case.

At the time he did the tests, earnings from mining were enough to cover half of his heating bill, even after paying for the mining rig’s electricity. That is not taking into account the electricity savings from the preheated air. He only shows the results of one evening, where it dropped his electricity usage from around 500Wh to below 250Wh. We would like to see the long-term results, and it would be an interesting challenge to build a model to calculate the true costs or savings, taking into account all the factors. For instance, it could be possible to save costs even if the mining rig itself is running at a slight loss.

Of course, this is not a new idea. A quick internet search yields several similar projects and even some commercial crypto mining space heaters. We do like the fact that [Christian] reused some hardware he already had and integrated it into his central heating rather than using it as a mobile unit.

When [Christian] isn’t building crypto heaters, he can be found flooding phishing scams with fake data, or tracking down corporate spies.

This is it; after a relatively short transit time of eight months, the Mars 2020 mission carrying the Perseverance rover has almost reached the Red Planet. The passage has been pretty calm, but that’s all about to end on Thursday as the Entry Descent and Landing phase begins. The “Seven Minutes of Terror”, which includes a supersonic parachute deployment, machine-vision-assisted landing site navigation, and a “sky-crane” to touch the rover down gently in Jezero crater, will all transpire autonomously 480 million km away. We’ll only learn about how it goes after the eleven-minute propagation delay between Mars and Earth, but we’ll be glued to the NASA YouTube live stream nonetheless. Coverage starts on February 18, 2021 at 11:15 AM Pacific Standard Time (UTC-8). We’ve created a handy time zone converter and countdown so you don’t miss the show.

As amazing as the engineering on display Thursday will be, it looks like the US Navy has plans to unveil technology that will make NASA as relevant as a buggy-whip company was at the turn of the last century. That is, if you believe the “UFO Patents” are for real. The inventor listed on these patents, Dr. Salvatore Pais, apparently really exists; he’s had peer-reviewed papers published in mainstream journals as recently as 2019. Patents listed to Dr. Pais stretch back to 2004, when he invented a laser augmented turbojet propulsion system, which was assigned to defense contractor Northrup Grumman. The rest of the patents are more recent, all seemingly assigned to the US Navy, and cover things like a “high-frequency gravitational wave generator” and a “craft using an inertial mass-reduction device”. There’s also a patent that seems to cover a compact fusion generator. If any of this is remotely true, and we remain highly skeptical, the good news is that maybe we’ll get things like the Epstein Drive. Of course, that didn’t end well for Solomon Epstein. Or for Manéo Jung-Espinoza.

Of course, if you’re going to capitalize on all these alien patents, you’re going to need some funding. If you missed out on the GME short squeeze megabucks, fret not — there’s still plenty of speculative froth to go around. You might want to try your hand at cryptocurrency mining, but with GPUs becoming near-unobtainium, you’ll have to get creative, like throwing together a crypto mining farm with a bunch of laptops. It looks like the Weibo user who posted the photos has laptops propped up on every available surface of their apartment, and there’s also a short video showing a more industrial setup with rack after rack of laptops. These aren’t exactly throw-aways from some grade school, either — they appear to be brand new laptops that retail for like $1,300 a pop. The ironic part is that the miner says this is better than the sweatshop he used to work in. Pretty sure with all that power being dissipated in his house, it’ll still be a sweatshop come summer.

A lot of people have recently learned the hard lesson that when the service is free, you’re the product, and that what Google giveth, Google can taketh away in a heartbeat, and for no discernable reason. Indie game studio Re-Logic and its lead developer Andrew Spinks found that out last week when a vaguely worded terms-of-service violation notice arrived from Google. The developer of the popular game Terraria was at a loss to understand the TOS violation, which resulted in a loss of access to all the company’s Google services. He spent three weeks going down the hell hole of Google’s automated support system, getting nothing but canned messages that were either irrelevant to his case or technically impossible; kinda hard to check your Gmail account when Google has shut it down. The lesson here is that building a business around services that can be taken away on a whim is perhaps not the best business plan.

And finally, we watched with great interest Big Clive’s secrets to getting those crisp, clean macro shots that he uses to reverse-engineer PCBs. We’ve always wondered how he accomplished that, and figured it involved some fancy ring-lights around the camera lens or a specialized lightbox. Either way, we figured Clive had to plow a bunch of that sweet YouTube cash into the setup, but we were surprised to learn that in true hacker fashion, it’s really just a translucent food container ringed with an LED strip, with a hole cut in the top for his cellphone camera. It may be simple, but you can’t argue with the results.