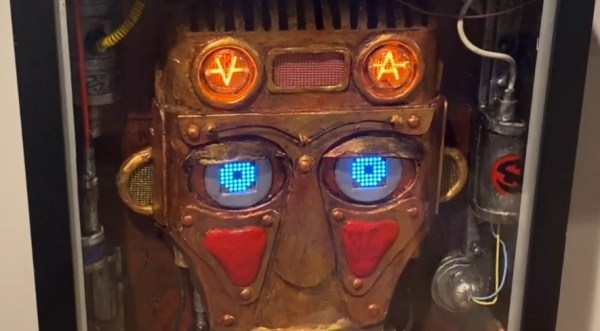 When [Tavis] and his father were inspired to lend their talents to building a robot sculpture, they split the duties. [Tavis]’ father built a robot head, and [Tavis] utilized designs old and new to breathe life into their creation.

Many a hardware hacker has been inspired by robotic art over the years. Whether it’s the vivid descriptions by the likes of Asimov and Clarke, the magnificent visuals from the formative 1927 film Metropolis, or the frantic arm-waving Robot from Lost In Space, the robots of Science Fiction have impelled many to bring their own creations to life.

For [Travis]’s creation, Two rare Russian Nixie Tubes in the forehead convey what’s on the robot’s mind, while dual 8×8 LED matrices from Adafruit give the imagination a window to the binary soul. A sound board also from Adafruit gives voice to the automaton, speaking wistful words in a language known only to himself.

A DC to DC converter raises the LiPo supplied 3.7v to the necessary 170v for the Nixies, and a hidden USB-C port charges the battery once its two-hour life span has expired. Two custom Nixie driver boards are each host to an Arduino Pro Micro, and [Tavis] has made the PCB design available for those wishing to build their own Nixie projects.

As you can see in the video below the break, the results are nothing short of mesmerizing!

Of course, we’re no strangers to robots here at Hackaday. Perhaps we can interest you in a drink created by the industrial-grade Robotic Bartender while you consider the best way to Stop the Robot Uprising. And remember, if you spot any awesome hacks, let us know via the Tip Line!

END_OF_DOCUMENT_TOKEN_TO_BE_REPLACED 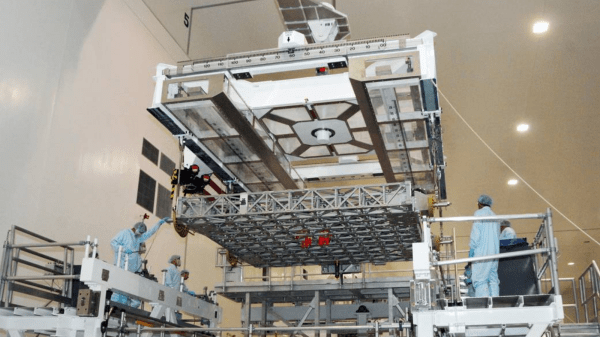 There’s a reason we often use the phrase “It ain’t Rocket Science”. Because real rocket science IS difficult. It is dangerous and complicated, and a lot of things can and do go wrong, often with disastrous consequences. It is imperative that the lessons learned from past failures must be documented and disseminated to prevent future mishaps. This is much easier said than done. There’s a large number of agencies and laboratories working on multiple projects over long periods of time. Which is why NASA has set up NASA Lessons Learned — a central, online database of issues documented by contributors from within NASA as well as other organizations.

The system is managed by a steering committee consisting of members from all NASA centers. Public access is limited to a summary of the original driving event, lessons learned and recommendations. But even this information can be quite useful for common folks. For example, this lesson on Guidance for NASA Selection & Application of DC-DC Converters contains several bits of useful wisdom. Or this one about IC’s being damaged due to capacitor residual discharge during assembly. If you ever need to add a conformal coating to your hardware, check how Glass Cased Components Fractured as a Result of Shrinkage in Coating/Bonding Materials Applied in Excessive Amounts. Finally, something we have all experienced when working with polarized components — Reverse Polarity Concerns With Tantalum Capacitors. Here is a more specific Technical Note on polarized capacitors (pdf): Preventing Incorrect Installation of Polarized Capacitors.

Unfortunately, all of this body of past knowledge is sometimes still not enough to prevent problems. Case in point is a recently discovered issue on the ISS — a completely avoidable power supply mistake. Science payloads attach to the ISS via holders called the ExPRESS logistics carriers. These provide mechanical anchoring, electrical power and data links. Inside the carriers, the power supply meant to supply 28V to the payloads was found to have a few capacitors mounted the other way around. This has forced the payloads to use the 120V supply instead, requiring them to have an additional 120V to 28V converter retrofit. This means modifying the existing hardware and factoring in additional weight, volume, heat, cost and other issues when adding the extra converter. If you’d like to dig into the details, check out this article about NASA’s power supply fail.

Thanks to [Jarek] for tipping us about this. 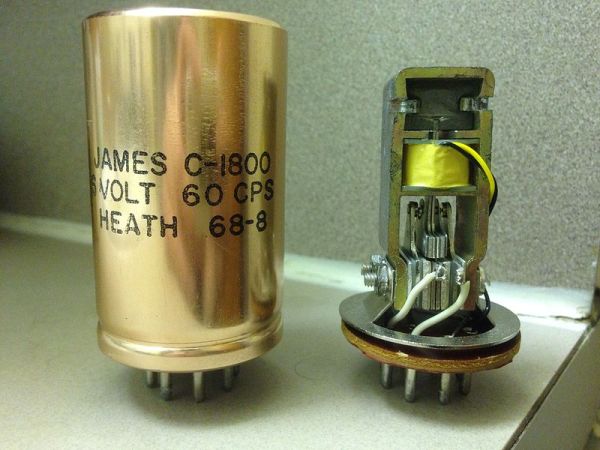