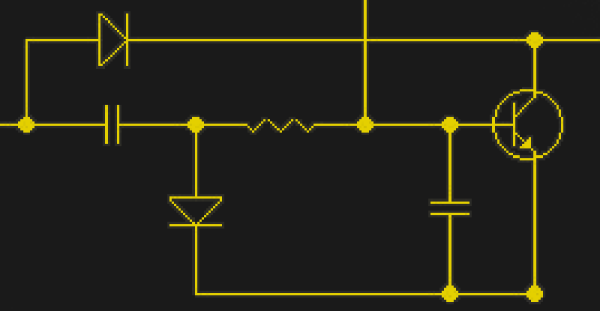 A flip-flop is one of the most basic digital electronic circuits. It can most easily be built from just two transistors, although they can and have been built out of vacuum tubes, NAND and NOR gates, and Minecraft redstone. Conventional wisdom says you can’t build a flip-flop with just one transistor, but here we are. [roelh] has built a flip-flop circuit using only one transistor and some bizarre logic that’s been slowly developing over on hackaday.io.

[roelh]’s single transistor flip-flop is heavily inspired by a few of the strange logic projects we’ve seen over the years. The weirdest, by far, is [Ted Yapo]’s Diode Clock, a digital clock made with diode-diode logic. This is the large-scale proof of concept for the unique family of logic circuits [Ted] came up with that only uses bog-standard diodes to construct arbitrary digital logic.

This is, without a doubt, a really, really weird circuit but falls well into territory that is easily understood despite being completely unfamiliar. The key question here is, ‘why?’. [roelh] says this could be used for homebrew CPUs, although this circuit is trading two transistors for a single transistor, two diodes, and a few more support components. For vacuum tube-based computation, this could be a very interesting idea that someone at IBM in the 40s had, then forgot to write down. Either way, it’s a clever application of diodes and an amazing expression of the creativity that can be found on a breadboard.

When looking across the discrete components in your electronic armory, it is easy to overlook the humble diode. After all, one can be forgiven for the conclusion that the everyday version of this component doesn’t do much. They have none of the special skills you’d find in tunnel, Gunn, varicap, Zener, and avalanche diodes, or even LEDs, instead they are simply a one-way valve for electrical current. Connect them one way round and current flows, the other and it doesn’t. They rectify AC to DC, power supplies are full of them. Perhaps you’ve also used them to generate a stable voltage drop because they have a pretty constant voltage across them when current is flowing, but that’s it. Diodes: the shortest Hackaday article ever.

Not so fast with dismissing the diode though. There is another trick they have hiding up their sleeves, they can also act as a switch. It shouldn’t come as too much of a shock, after all a quick look at many datasheets for general purpose diodes should reveal their description as switching diodes.

So how does a diode switch work? The key lies in that one-way valve we mentioned earlier. When the diode is forward biased and conducting electricity it will pass through any variations in the voltage being put into them, but when it is reverse biased and not conducting any electricity it will not. Thus a signal can be switched on by passing it through a diode in forward bias, and then turned off by putting the diode into reverse bias.

END_OF_DOCUMENT_TOKEN_TO_BE_REPLACED

One of the favorite pastimes of electronics hobbyists is clock making. Clocks are a simple enough concept with a well-defined goal, but it’s the implementation that matters. If you want to build a clock powered only by tubes and mains voltage, that’s a great skill tester. A relay-based timepiece is equally cool, and everyone should build a Nixie tube clock once in their lives.

For [Ted]’s Hackaday Prize entry, he’s building a clock. Usually, this would be little cause for celebration, but this is not like any clock you’ve ever seen. [Ted] is building this clock using only diodes, and he’s inventing new logic families to do it.

Using diodes as logic elements has been around since the first computers, but these computers had a few transistors thrown in. While it is possible to make AND and OR gates using only diodes, a universal logic gate – NANDs and NORs – are impossible. For the computers of the 1950s, that means tubes or transistors and DTL logic.

For the past few years, [Ted] has been working on a diode-only logic family, and it appears he’s solved the problem. The new logic family includes a NOR gate constructed using only diodes, resistors, and inductors. The key design feature of these gates is a single diode to switch an RF power supply on and off. It relies on an undocumented property of the diodes, but it does work.

Although [Ted] can create a NOR gate without transistors — a feat never before documented in the history of electronics — that doesn’t mean this is a useful alternative to transistor logic. The fan-out of the gates is terrible, the clock uses about 60 Watts, and the gates require an AC power supply. While it is theoretically possible to build a computer out of these gates, it’s doubtful if anyone has the patience to do so. It’s more of a curiosity, but it is a demonstration of one of the most mind-bending projects we’ve ever seen.

You can check out a video of the diode clock below.