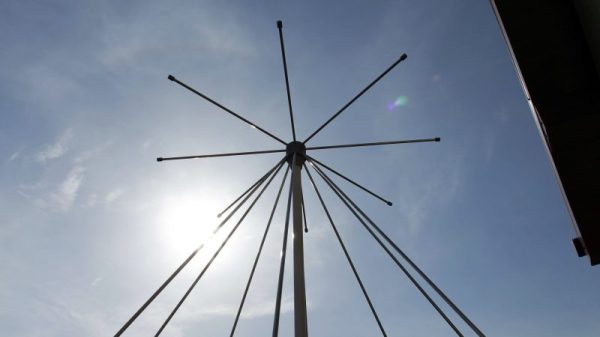 For hams and other radio enthusiasts, the best part of the hobby is often designing antennas. Part black magic, part hard science, and part engineering, antenna design is an art. And while the expression of that art often ends up boiling down to pieces of wire cut to the correct length, some antennas have a little more going on in the aesthetics department.

Take the discone antenna, for example. Originally designed as a broadband antenna to sprout from aircraft fuselages, the discone has found a niche with public service radio listeners. But with a disk stuck to the top of a cone, the antennas have been a little hard to homebrew, at least until [ByTechLab] released this mostly 3D-printed discone. A quick look at the finished product, resembling a sweater drying rack more than a disc on top of a cone, reveals that the two shapes can be approximated by individual elements instead of solid surfaces. This is the way most practical discones are built, and [ByTechLab]’s Thingiverse page has the files needed to print the parts needed to properly orient the elements, which are just 6-mm aluminum rods. The printed hub pieces sandwich a copper plate to tie the elements together electrically while providing a feedpoint for the antenna as well as a sturdy place to mount it outdoors. This differs quite a bit from the last 3D-printed discone we featured, which used the solid geometry and was geared more for indoor use.

Interested in other antenna designs? Who can blame you? Check out the theory behind the Yagi-Uda beam antenna, or how to turn junk into a WiFi dish antenna. 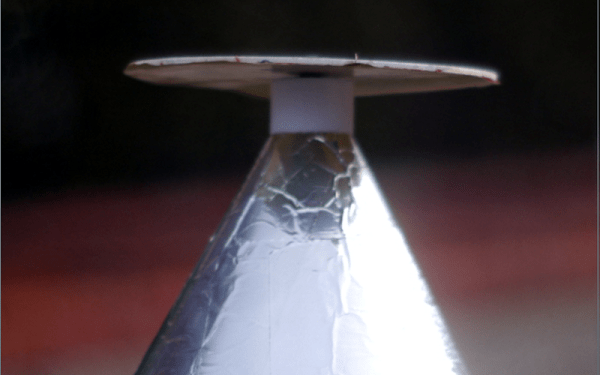 Antennas are a tricky thing, most of them have a fairly narrow range of frequencies where they work well. But there are a few designs that can be very broadband, such as the discone antenna. If you haven’t seen one before, the antenna looks like — well — a disk and a cone. There are lots of ways to make one, but [mkarliner] used a 3D printer and some aluminum tape to create one and was nice enough to share the plans with the Internet.

As built, the antenna works from 400 MHz and up, so it can cover some ham bands and ADS-B frequencies. The plastic parts act as an anchor and allow for coax routing. In addition, the printed parts can hold a one-inch mast for mounting.

END_OF_DOCUMENT_TOKEN_TO_BE_REPLACED 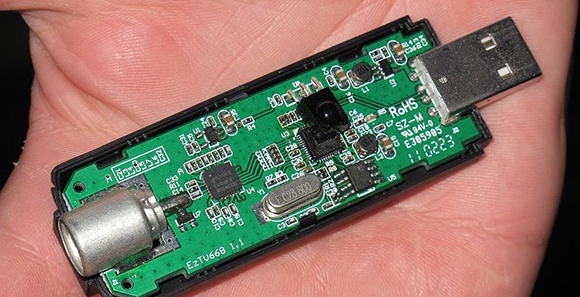 The University of Kent’s hackerspace, TinkerSoc, recently had a talk on software-defined radio using an incredibly inexpensive USB TV tuner. Of course this is nothing new to Hackaday readers, but they did manage to build one of the best antennas for their TV dongle. It’s a discone antenna, and is perfectly suited for tuning into a whole bunch of really cool things such as weather balloons and aircraft transponders.

The idea discone antenna looks exactly like its namesake; a metal disk attached to a metal cone. Of course with the frequencies the RTL software-defined radio deals with, it’s rarely necessary to build antennas out of sheet metal. The team at TinkerSoc built their discone out of galvanized garden wire and attached it to the input of their TV tuner.

All the dimensions for their discone antenna were gleaned from [ve3sqb]’s antenna design programs. Since TinkerSoc designed their antenna for 110 MHz, it ended up being pretty large. For higher frequencies, though, a discone antenna become fairly small and more than portable enough for a mobile rig.

The guys at Inventables put together a neat CNC router kit that looks very interesting. It uses Makerslide linear bearings and CNC’d parts to make a surprisingly cheap frame for something that can engrave wood and metal. Inventables is running a Kickstarter-esque preorder to fund this production run but right now they’re 30 orders short. We’d like to see how these routers turn out in the real world, so if you’re on the fence (or just want a CNC router), this might be the time to buy.

[Jared] sent in a fume extractor he put together. It’s a small PC case fan with a carbon filter sandwiched between a pair of grilles. Not much, but if should keep those wonderful flux fumes away from your face.

[filespace] shared an awesome Electrofishing video with us. Electrofishing pulses a DC current through two electrodes attached to a boat. This current causes galvanotaxis in fish, causing them to swim towards the anode. The fish can be caught with a net and released afterwards; there’s no damage to the fish at all. We’d love to see a DIY solution, but throwing M-80s into a lake doesn’t count.

Improving GSM reception with a bit of metal

[Raivis] lives in the country, so even his voice reception on GSM is terrible, let alone data. Inspired by an earlier post, [Raivis] built a discone antenna to improve his cell signal. Now everything is crystal clear and his Huawei E1752 USB/GSM modem improved from 3 mbps down to 5 mbps down.

[Dana] sent in a few pics of a project he’s working on. He’s making halftone prints with a CNC and metal. We’ve seen this before, but we’re really loving [Dana]’s take on it. He’s using two-layer engraving plastic with a .005” engraving tool on his CNC. There’s a gallery of his work after the break; [Dana]’s portrait is 14000+ dots and took 6 hours, his bosses kids are 16000+ dots and took 4 hours, and [Dana]’s niece is 5500 dots and took 35 minutes. Very awesome work, and now [Dana] has fulfilled a lifelong dream of machining his face.

END_OF_DOCUMENT_TOKEN_TO_BE_REPLACED

Impressed by the recent advances in the software defined radio scene, [Jason] picked up a $20 USB TV tuner dongle to check out his local airwaves. Unfortunately, the antenna included with the little USB dongle is terrible at receiving any signal other than broadcast TV. [Jason] wanted to improve his reception, so he got some wire and made his own discone antenna.

The discone antenna is ideally suited for [Jason]’s setup – properly constructed, it’s able to receive over the entire 64 to 1700 MHz band the RTL-SDR dongle is able to read. To construct his antenna, [Jason] checked out [VE3SQB]’s list of antenna design programs, got the dimensions of his antenna, and set to work attaching wire to PVC pipe.

The antenna is a massive improvement over the stock antenna included with the TV tuner dongle. After mounting his discone at the far end of his back yard, [Jason] started picking up a few blips from the transponders of passing aircraft.