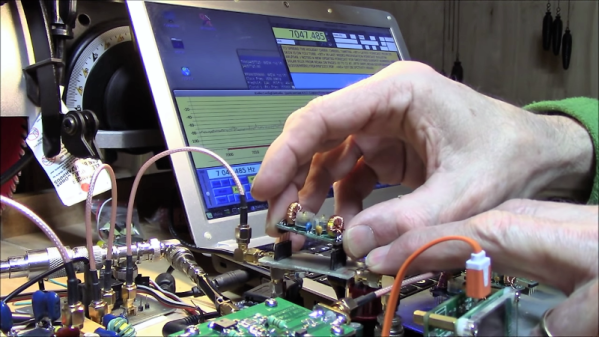 Many of us have fond memories of our introduction to electronics through the “200-in-1” sets that Radio Shack once sold, or even the more recent “Snap Circuits”-style kits. Most of eventually us move beyond these kits to design our circuits; still, there’s something to be said for modular designs. This complete amateur radio transceiver is a great example of that kind of plug and play construction.

The rig is the brainchild of [jmhrvy1947], who set out to build a complete transceiver using mostly eBay-sourced modules. Some custom PCBs are used, but those are simple boards that can be etched and drilled easily. The transceiver is only for continuous-wave (CW) use, which would normally mean you’d need to know Morse, but thanks to some clever modifications to open-source apps like Quisk and FLDigi, Morse can be received and sent directly from the desktop. That will no doubt raise some hackles, but we think it’s a great way to learn code. The rig is QRP, or low power, transmitting only 100 mW with the small power amp shown. Adding eBay modules can jack that up to a full 100 Watts, which also requires adding a 12-volt power supply, switchable low-pass filters, a buck-boost converter, and some bandpass filters for band selection. It ends up looking very experimental, but it works well enough to make contacts.

We really like the approach here, and the fact that the rig can be built in stages. That makes it a perfect project for our $50 Ham series, which just kicked off. Perhaps we’ll be seeing it again soon.

END_OF_DOCUMENT_TOKEN_TO_BE_REPLACED