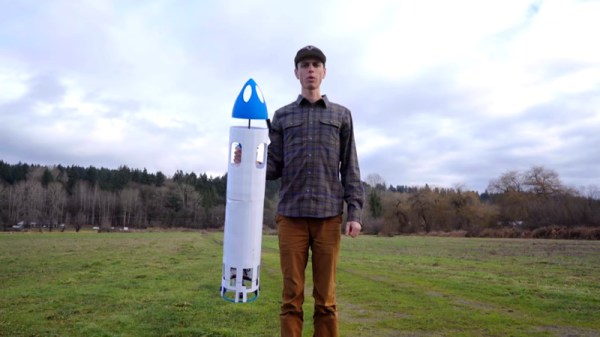 Quadcopters are familiar, and remote control planes are old hat at this point. However, compact lightweight power systems and electronic flight controllers continue to make new flying vehicles possible. In that vein, [rctestflight] has been experimenting with a brushless electric rocket craft, with interesting results. (Youtube, embedded below.)

The build uses a single large brushless motor in the tail for primary thrust. Four movable vanes provide thrust vectoring capability. To supplement this control a quadcopter was gutted, and its motors rearranged in the nose of the craft to create a secondary set of thrusters which aid stabilization and maneuverability.

The aim is to experiment with a flight regime consisting of vertical takeoff followed by coasting horizontally before returning to a vertical orientation for landing. Preliminary results have been positive, though it was noted that the body of the aircraft is significantly reducing the available thrust from the motors.

It’s a creative design which recalls the SpaceX vertical landing rockets of recent times. We’re excited to see where this project leads, and as we’ve seen before – brushless power can make just about anything fly. Even chocolate. Video after the break.