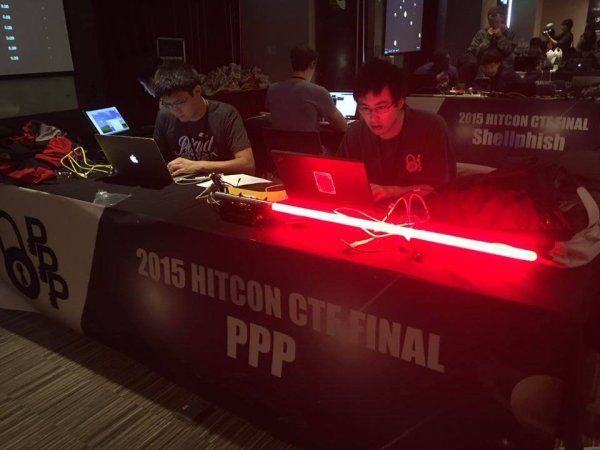 There’s a great game of capture-the-flag that takes place every year at HITCON. This isn’t your childhood neighborhood’s capture-the-flag in the woods with real flags, though. In this game the flags are on secured servers and it’s the other team’s mission to break into the servers in whatever way they can to capture the flag. This year, though, the creators of the game devised a new scoreboard for keeping track of the game: a lightsaber.

In this particular game, each team has a server that they have to defend. At the same time, each team attempts to gain access to the other’s server. This project uses a lightsaber stand that turns the lightsabers into scoreboards for the competition at the 2015 Hacks In Taiwan Conference. It uses a cheap OpenWRT Linux Wi-Fi/Ethernet development board, LinkIt Smart 7688 which communicates with a server. Whenever a point is scored, the lightsaber illuminates and a sound effect is played. The lightsabers themselves are sourced from a Taiwanese lightsabersmith and are impressive pieces of technology on their own. As a bonus the teams will get to take them home with them.

While we doubt that this is more forced product integration advertisement from Disney, it certainly fits in with the theme of the game. Capture-the-flag contests like this are great ways to learn about cyber security and how to defend your own equipment from real-world attacks. There are other games going on all around the world if you’re looking to get in on the action.