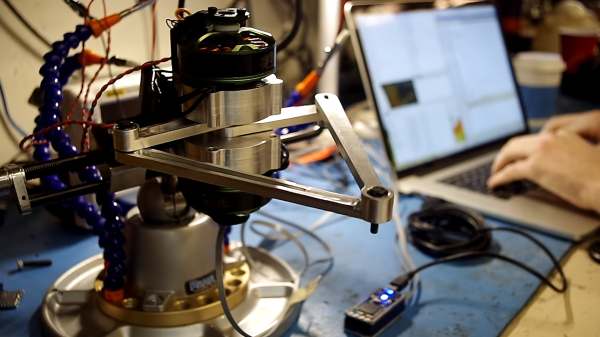 [Ben Katz] is building a running robot from hobby level brushless motors, all on his blog under the tag, “HobbyKing Cheetah.”

One of the features of fancy modern industrial motor and controller sets is the ability for the motor to act as a mass-spring-damper. For example, let’s say you want a robot to hold an egg. You could have it move to the closed position, but tell the controller you only want to use so much force to do it. It will hold the egg as if there was a spring at its joint.

Another way you could use this is in the application of a robot leg. You tell the controller what kind of spring and shock absorber (damper) combination it is and it will behave as if those parts have been added to the mechanism. This is important if you want a mechanical leg to behave like a biological leg.

[Ben] had worked on a more formal project which used some very expensive geared motors to build a little running robot. It looks absolutely ridiculous, as you can see in the following video, but it gives an idea of where he’s going with this line of research. He wanted to see if he could replace all those giant geared motors with the cheap and ubiquitous high performance brushless DC motors for sale now. Especially given his experience with them.

So far he’s done a very impressive amount of work. He’s built a control board. He’s characterized different motors for the application.  He’s written a lot of cool software; he can even change the stiffness and damping settings on the fly. He has a single leg that can jump. It’s cool. He’s taking a hiatus from the project, but he’ll be right back at it soon. We’re excited for the updates! [Oscar] has been busy lately building DIY mini quadcopters. We saw his controller design earlier in the month. Back then he was using it with his walking robot designs. Now [Oscar] has posted up some information on his quadcopter work. Even though [Oscar] is new to mini quads, he began by designing his own frame. He started his frame design by using a cut down version of the well-known 949 frame. [Oscar] chose polystyrene for his motor mounts, which turned out to be the downfall of the frame. Polystyrene proved to be much too flimsy to handle the vibrations of the motors and props. The vibrations were transmitted to the accelerometers, which resulted in a model that was very hard to control. You can see this in the first video after the break.

For his second attempt, [Oscar] started with a proven design from HobbyKing. HobbyKing’s fiberglass mini quadcopter frame is sturdy, but heavy, and expensive to replace (If the parts are even in stock). The frame did work though, so he used it as a starting point for his second DIY frame. The new frame is based upon fiberglass shafts. [Oscar] used hot glue to join the shafts to the motor mounts. Each joint was wrapped in string, which was then coated with hot glue. We’d suggest thin cyanoacrylate glue in the future for these types of joints. Only a few drops of CA soaks up into the string, creating an extremely light and strong joint. [Oscar’s] frame ended up at about half the weight of the HobbyKing frame, but was stiff enough for a successful flight test, as can be seen in the second video after the break.