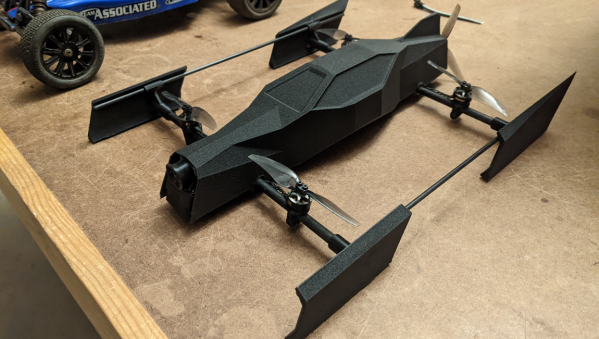 As anyone who’s spent Christmas morning trying to shake a quadcopter out of a tree can attest, controlling these fast moving RC vehicles can be tricky and require a bit of practice to master. [Erik] wanted to simplify this a little bit so his children and friends could race with him, and the end result is a drone that only needs two inputs to fly.

The results of his experimentation with simplifying the controls resulted in a “speeder” type drone which attempts to keep a certain distance off of the ground on its own thanks to an extremely fast time-of-flight sensor. The pilot is then left to control the throttle and the steering only, meaning that [Erik] can use pistol-style RC controllers for these machines. They have some similarities to a quadcopter, but since they need to stay level in flight they also have a fifth propeller on the back, similar to an airboat. This allows for a totally separate thrust control than would normally be available on a quadcopter.

The resulting vehicle is immediately intuitive to fly, behaving more like an RC car than a quadcopter. This also required quite a bit of processing power to compute the proper roll and yaw from a single steering input, but after many prototypes the result is impressive, especially since it was also built to use FPV as a means of control. One of the videos below demonstrates this video, and looks extremely fun to fly, and we wouldn’t mind seeing a race with these types of speeders much like we saw in the past with a group of pod-racing quadrotors.

END_OF_DOCUMENT_TOKEN_TO_BE_REPLACED 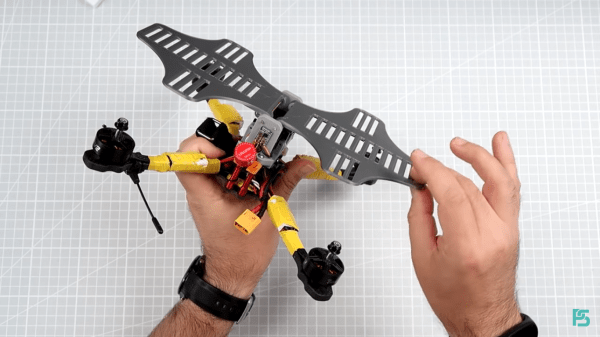 While there are some fixed-wing drones in the hobby world, most of us around here think of the quadcopter when this word is mentioned. There have been some fixed-wings around, and lots of multi-rotors, but not much of a mix of the two. [Paweł] wanted to see what would happen if he mixed these two together, and created a quadcopter drone with retractable wings, essentially just to see what would happen.

This isn’t something that can convert from fixed-wing flight to helicopter-style hovering like a V22 Osprey or Harrier, either. The lift and thrust is entirely generated by the rotors, and the “wings” are essentially deployable air brakes that allow the drone to slow down quickly without consuming as much energy under propeller power alone. The air brake wings are designed to automatically deploy as a function of throttle position, too, so there’s a lot that could be built on this idea in the future, in theory.

[Paweł] notes that this design is somewhat controversial, and although few of us are in the drone racing community we can imagine how a functional change like this might impact in an arena such as that. He also only saw marginal performance increases and isn’t planning on perusing this idea much further. If you’re interested in a drone with “true” wings, though, check out this one which gets fired out of a grenade launcher.

END_OF_DOCUMENT_TOKEN_TO_BE_REPLACED 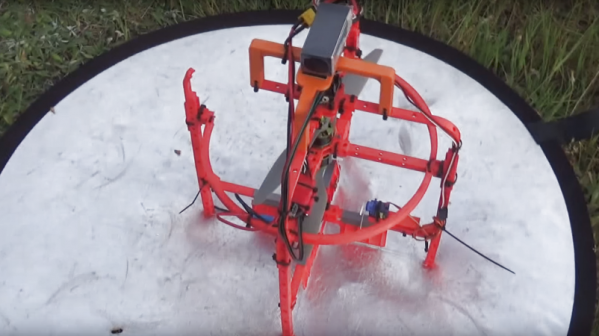 Fair warning: [Paweł Spychalski]’s video is mostly him talking about how bad his “dualcopter” ended up. There are a few sequences of the ill-fated UAV undergoing flight tests, most of which seem to end with it doing a reasonable impression of a post-hole auger. We have to admit that it’s a pretty poor drone. But one can only truly fail if one fails to have some fun doing it, [Paweł] enjoyed considerable success, at least judging by the glee with which he repeatedly cratered the craft.

The overall idea seems to make sense, with coaxial props mounted in the middle of a circular 3D-printed frame. Mounted below the props are crossed vanes controlled by two servos. The vanes sit in the rotor wash and provide pitch and roll control, while yaw and thrust are controlled by varying the speeds of the counter-rotating props. [Paweł] knew going in that this was a sketchy aerodynamic design, and was surprised it performed as well as it did. But with ground effects limiting roll and pitch control close to the ground, the less-than-adequate thrust due to turbulence between the rotors, and the tendency for the center of mass and the center of gravity to get out whack with each other, all made for a joyously unstable and difficult to control aircraft.

Despite the poor performance, [Paweł] has plans for a Mark II dualrotor, a smaller craft with some changes based on what he learned. He’s no slouch at pushing the limits with multirotors, with 3D-printed racing quad frames and using LoRa for control beyond visual range. Still, we’re sure he’d appreciate constructive criticism in the comments, and we wish him luck with the next one.

END_OF_DOCUMENT_TOKEN_TO_BE_REPLACED 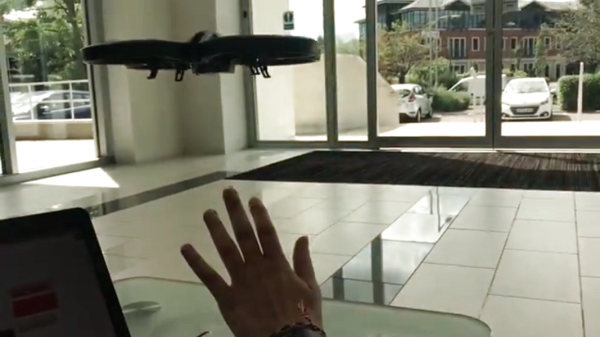 One of the companion technologies in the developing field of augmented reality is gesture tracking. It’s one thing to put someone in a virtual or augmented world, but without a natural way to interact inside of it the user experience is likely to be limited. Of course, gestures can be used to control things in the real world as well, and to that end [Sarah]’s latest project uses this interesting human interface device to control a drone.

The project uses a Leap Motion sensor to detect and gather the gesture data, and feeds all of that information into LabVIEW. A Parrot AR Drone was chosen for this project because of a robust API that works well with this particular software suite. It seems as though a lot of the grunt work of recognizing gestures and sending commands to the drone are taken care of behind-the-scenes in software, so if you’re looking to do this on your own there’s likely to be quite a bit more work involved. That being said, it’s no small feat to get this to work in the first place and the video below is worth a view.

To some, gestures might seem like a novelty technology with no real applications, but they do have real-world uses for people with disabilities or others with unusual workflow that require a hands-free approach. So far we’ve seen hand gesture technologies that drive cars, help people get around in the physical world, and even play tetris.

END_OF_DOCUMENT_TOKEN_TO_BE_REPLACED With the advancements in quadrotor parts and technology over the years, it’s become possible to make just about anything fly if you can strap some high-speed rotors to it. Introducing the first edible quadrotor!

[Michael] enjoys building and flying quadrotors. His girlfriend enjoys baking and making chocolates. One day she had a crazy idea — what if they made a quadrotor together, combining their unique skill sets? [Michael] was a bit skeptical at first. After all, chocolate doesn’t really compare to aluminum or carbon for a frame material… and chocolate melts at room temperature. Regardless — they were curious enough to try it out and see for sure.

First they built a wooden prototype and then created a silicone mold from it. Using Styrofoam and metal spacers for the electronics mounts they filled the mold with chocolate and let it set. A bit of assembly later and they had a chocolate quadrotor. It flies too.

END_OF_DOCUMENT_TOKEN_TO_BE_REPLACED 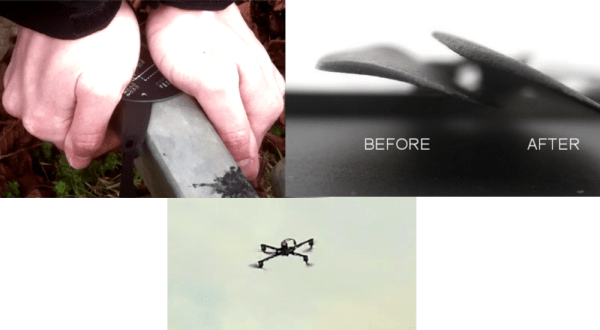 Inverted Quadcopter? That generally means a crash is soon to follow. Not so for a new crop of quadcopter fliers. These new quadcopters are capable of sustained inverted flight. We’ve seen inverted quadcopters before here on hackaday. However, previous inverted quadcopters always used collective pitch to control the thrust produced by the blades. Collective pitch on a quadcopter is much simpler than it is on the main rotor of a traditional helicopter. R/C and full-scale helicopters mix collective and cyclic pitch to articulate the main rotor blades. A quadcopter only needs the collective portion, which is similar to a traditional helicopters tail rotor mechanism, or a variable pitch prop on an airplane.

These new quadcopters are using a much simpler method of flying inverted: Spin the motors backwards. Quadcopters control their flight by quickly varying the speed of rotation of each motor. Why not completely reverse the motor then? Today’s brushless outrunner motors have more than enough power to quickly reverse direction. The problem becomes one of propellers. Standard propellers are designed to create thrust in one direction only. Every quadcopter uses two clockwise rotation and two counterclockwise rotation propellers. Propellers will generate reverse thrust if they are spun backwards, however they will not be as efficient as they would when spinning the direction they were designed for. The quad fliers have found a partial solution to this problem: Remove the curve from the blade. R/C propeller blades are sold by diameter and blade pitch. The pitch is a measure of the angle of attack of the blades. R/C blades also have an airfoil style curve molded into them. Removing this curve (but not changing the pitch) has helped the problem.

This final problem is control systems. Since quadcopters already are relying on computer control for basic flight, it’s simply a matter of loading custom firmware onto your flight board to support motor rotation reversal. Speed controls also have to be capable of reverse rotation, which means new firmware as well. We’re curious to see how the quadcopter community settles on the control systems for inverted flight. The R/C helicopter community went through several iterations of control systems over the years. At one point they were using “Invert switches” which reversed controls as well as handled the collective pitch changes. As time went on, these switches fell out of favor and are now known as “Crash switches” due to the result of accidentally hitting one while flying, or before engine start.

END_OF_DOCUMENT_TOKEN_TO_BE_REPLACED

In recent years, quadrotors have exploded in popularity. They’ve become cheap, durable, and can do some really impressive things, but are they the most efficient design? The University of Queensland doesn’t think so.

Helicopters are still much more efficient and powerful due to their one big rotor, and with the swashplate mechanism, perhaps even more maneuverable — after all did you see our recent post on collective pitch thrust vectoring? And that was a plane! A few quick searches of helicopter tricks and we think you’ll agree.

The new design, which is tentatively called the Y4, or maybe a “Triquad” is still a quadrotor, but it’s been jumbled up a bit, taking the best of both worlds. It has a main prop with a swashplate mechanism, and three smaller rotors fixed at 45 degree angles, that provide the counter torque — It’s kind of like a helicopter with three tails.

Regarding efficiency, the researchers expect this design could achieve an overall increase of about 25% in performance, compared to that of a standard quadrotor. So, they decided to test it and built a quad and a Y4 as similar as possible — the same size, mass, batteries, arms, and controller board. The results? The Y4 had an increased run time of 15%! They think the design could very well make the 25% mark, because in this test study, the Y4 was designed to meet the specifications of the quad, whereas a more refined Y4 without those limitations could perhaps perform even better.

Unfortunately there’s no video we can find, but if you stick around after the break we have a great diagram of how (and why) this design works!