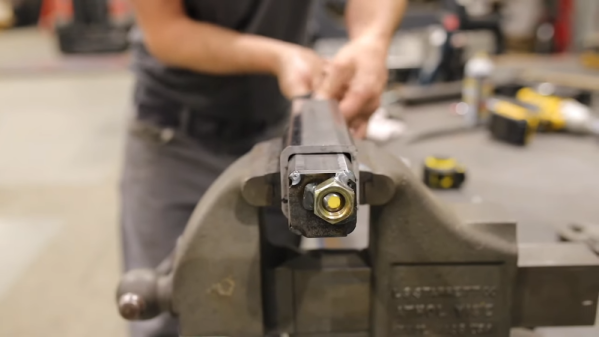 Beginning metalworkers are often surprised at just how cheap steel can be. It’s a commodity made by the gigaton, and there are always plenty of extra pieces and scraps left over from big projects that are available for pennies a pound. But what you’ve got is often not what you need, especially when it’s steel tubing with welded seams that prevents one tube from fitting inside another.

[Jason Marburger] from Fireball Tool has some great tips for cleaning interior welds in steel tubing. The first part of the video below details manual methods for cleaning off seam welds, including chiseling, sanding with a narrow belt sander, and grinding them down with a die grinder. Those all work well, but only for short lengths of tubing. Longer tubes need special treatment, which is where the clever tools [Jason] designed come in handy.

By attaching a chunk of high-speed steel to a slug made from the next size tube down and driving it through the tube to be cleaned with a hefty piece of threaded rod, he basically created ain internal shaper to shave the weld down. It works like a charm, as does the tool he made for round tubing by laying a bead of hard facing welding rod around the edge of a mild steel slug. Driving this tool into the seamed round tubing with a shop press cleaned up the weld nicely too.

Hats off to [Jason] for coming up with a couple of great shop tips to keep in mind. We’ve seen similar expedient tools for metalworking lately, like this homemade die-punching tool and a linear track to keep your plasma cutter in line.

END_OF_DOCUMENT_TOKEN_TO_BE_REPLACED

Getting into machining is hard. From high-speed seel versus carbide to “old US iron” versus “new Asian manufacture” to simply choosing which drill bits to buy, many hard decisions must be made before one even has a chance to gain experience. Fear not, [Quinn Dunki] has created “a roadmap for how to get involved in this hobby.”

We saw [Quinn’s] first entry in her lathe series back in January, and now the series is complete! Starting with the definition of a machine tool and ending with the famous Clickspring scriber and a multi-material pen, [Quinn] leaves no stone unturned. [Quinn’s] style contrasts with the likes of [ThisOldTony], [AvE] or [Clickspring], as she makes sure to include the gory details of everything, citing her dissatisfaction with most YouTube machinists as motivation:

they’re all about the money shots of chips flying, but thin on the actual work of machining, which is mostly work-holding setups, changing bits and dies around, etc. That’s where all the knowledge is. The machine does the work once you spend 20 minutes setting it up properly for the operation. Everyone skips that part. I scour Tubalcain videos for details like the angle of the compound for a facing operation, or how to drill a deep hole with a short tail stock without the carriage getting in the way. Simple things like that get glossed over, but stump a beginner.

Of the series, our favorite part was “Grinding tool bits.” When combined with [ThisOldTony’s] Grinding HSS Tools, the two form an education in high-speed steel tool grinding fit for a hacker. Need more than high-speed steel? We’ve got you covered. 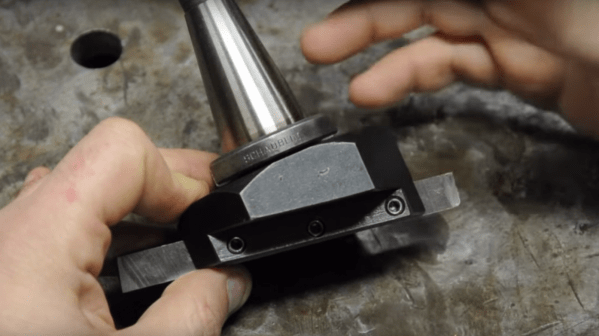 Milling machines can be pretty intimidating beasts to work with, what with the power to cut metal and all. Mount a fly cutter in the mill and it seems like the risk factor goes up exponentially. The off-balance cutting edge whirling around seemingly out of control, the long cutting strokes, the huge chips and the smoke – it can be scary stuff. Don’t worry, though – you’ll feel more in control with a shop-built fly cutter rather than a commercial tool.

Proving once again that the main reason to have a home machine shop is to make tools for the home machine shop, [This Old Tony] takes us through all the details of the build in the three-part video journey after the break. It’s only three parts because his mill released the Magic Smoke during filming – turned out to be a bad contactor coil – and because his legion of adoring fans begged for more information after the build was finished. But they’re short videos, and well worth watching if you want to pick up some neat tips, like how to face large stock at an angle, and how to deal with recovering that angle after the spindle dies mid-cut. The addendum has a lot of great tips on calculating the proper speed for a fly cutter, too, and alternatives to the fly cutter for facing large surfaces, like using a boring head.

[ThisOldTony] does make things other than tooling in his shop, but you’ll have to go to his channel to find them, because we haven’t covered too many of those projects here. We did cover his impressive CNC machine build, though. All [Tony]’s stuff is worth watching – plenty to learn.