While the streets of Paris are tame during the day, at night is when Les UX really comes alive. A typical night might involve hiding in the shadows away from potential authorities roaming the streets, descending into the tunnels through a grate in the road, and carrying materials to an agreed upon drop off location. Other nights might involve wedging and climbing over pipes and ladders, following the routes into the basements of buildings left unguarded.
END_OF_DOCUMENT_TOKEN_TO_BE_REPLACED

Join us Wednesday at noon Pacific time for the All Things Enigma Hack Chat! 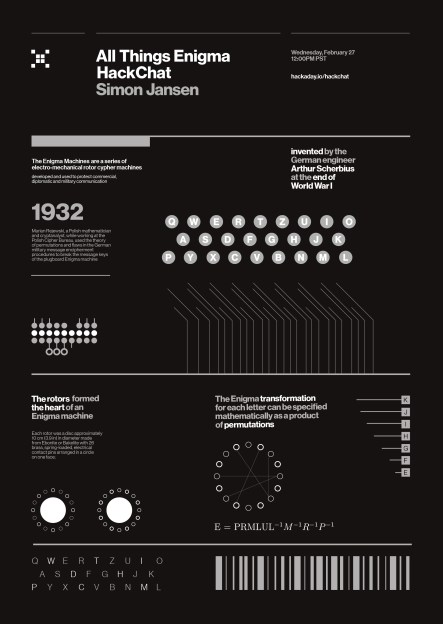 This week’s Hack Chat is a bit of a departure for us because our host, Simon Jansen, has tackled so many interesting projects that it’s hard to settle on one topic. Simon is a multidisciplinary hacker whose interests run the gamut from building an ammo-can Apple ][ to a literal steampunk Rickroller. How about a Bender Brewer? Or a MAME in a TARDIS? Or perhaps making an old phone play music to restore a car by? Oh, and remember that awesome ASCII animation of Star Wars: Episode IV? That was Simon.

So, a little hard to choose a topic, but we asked Simon to talk a bit about his recent Enigma watches. He has managed to put an electronic emulation of the Enigma cypher machine from World War II into both a wristwatch and, more recently, a pocket watch. They’re both gorgeous builds that required a raft of skills to complete. We’ll start there and see where the conversation takes us!

You are, of course, encouraged to add your own questions to the discussion. You can do that by leaving a comment on the All Things Enigma Hack Chat and we’ll put that in the queue for the Hack Chat discussion.

Our Hack Chats are live community events on the Hackaday.io Hack Chat group messaging. This week we’ll be sitting down on Wednesday, February 27, at noon, Pacific time. If time zones have got you down, we have a handy time zone converter.

A pocket watch, tucked into a waistcoat pocket and trailing a long chain, is a retro-hip accessory. A pocket watch gutted of its mechanical innards and updated as a smart appliance might be a horological abomination, but would still be a cool hack. A pocket watch converted to a digital Enigma machine is in a class all by itself.

[Simon] admits that he has a thing for pocket timepieces, having a sizable collection of old and not-so-old watches, some that even serve for everyday carry. Trouble is, they eventually break, and qualified watchmakers are getting hard to come by. So refitting defunct watches has become a hobby for him, and this example is a doozy. It uses an Enigma emulator running on an Arduino, similar to one that he stuffed into a somewhat oversized wristwatch a few years ago. Fitting it into a pocket watch case required a bit of finagling, including a 0.5-mm thick main PCB that flexes a bit to fit the contours of the case. A small OLED screen peeks through the front bezel, which is done up in an attractive black crinkle finish with brass buttons for a nice retro look. There’s even an acid-etched brass badge on the front cover with his special logo, complete with a profile of the original Enigma rotors.

Very impressive workmanship, and we don’t even care that it doesn’t tell time. Need a little background on the original Enigma? [Steve Dufresne] did a great job going through the basics a while back.

END_OF_DOCUMENT_TOKEN_TO_BE_REPLACED

Clock movements are beautifully complex things. Made up of gears and springs, they’re designed to tick away and keep accurate time. Unfortunately, due to the vagaries of the universe, various sources of error tend to creep in – things like temperature changes, mechanical shocks, and so on. In the quest for ever better timekeeping, watchmakers decided to try and rotate the entire escapement and balance wheel to counteract the changing effect of gravity as the watch changed position in regular use.

They’re mechanical works of art, to be sure, and until recently, reserved for only the finest and most luxurious timepieces. As always, times change, and tourbillions are coming down in price thanks to efforts by Chinese manufacturers entering the market with lower-cost devices. But hey – you can always just make one at home.

That’s right – it’s a 3D printed gyrotourbillion! Complete with a 3D printed watch spring, it’s an amazing piece of engineering that would look truly impressive astride any desk. All that’s required to produce it is a capable 3D printer and some off-the-shelf bearings and you’ve got a horological work of art.

It’s not the first 3D-printed tourbillion we’ve seen, but we always find such intricate builds to be highly impressive. We can’t wait to see what comes next – if you’re building one on Stone Henge scale for Burning Man, be sure to let us know. Video after the break.

END_OF_DOCUMENT_TOKEN_TO_BE_REPLACED

In an age of smartwatches, an analog watch might seem a little old-fashioned. Whether it’s powered by springs or a battery, though, the machinery that spins those little hands is pretty fascinating. Trouble is, taking one apart usually doesn’t reveal too much about their tiny workings, unless you get up close and personal like with this microscopic tour of an analog watch.

This one might seem like a bit of a departure from [electronupdate]’s usual explorations of the dies within various chips, but fear not, for this watch has an electronic movement. The gross anatomy is simple: a battery, a coil for a tiny stepper motor, and the gears needed to rotate the hands. But the driver chip is where the action is. With some beautiful die shots, [electronupdate] walks us through the various areas of the chip – the oscillator, the 15-stage divider cascade that changes the 32.768 kHz signal to a 1 Hz pulse, and a remarkably tiny H-bridge for running the stepper. We found that last section particularly lovely, and always enjoy seeing the structures traced out. There are even some great tips about using GIMP for image processing. Check out the video after the break.

[electronupdate] knows his way around a die, and he’s a great silicon tour guide, whether it’s the guts of an SMT inductor or a Neopixel close-up. He’s also looking to improve his teardowns with a lapping machine, but there are a few problems with that one so far.

END_OF_DOCUMENT_TOKEN_TO_BE_REPLACED

In the world of late-stage capitalism, unchecked redistribution of wealth to the upper classes has led to the development of so-called ultraluxury watches. Free from any reasonable constraints on material or R&D cost, manufacturers are free to explore the outer limits of the horological art. [Karel] is an aspiring engineer and watch enthusiast, and has a taste for the creations of Urwerk. They decided to see if they could create a replica of the UR202 watch with nothing more than the marketing materials as a guide.

[Karel]’s first job was to create a model of the watch in CAD. For a regular watch this might be simple enough, but the UR202 is no run-of-the-mill timepiece. It features a highly irregular mechanism, full of things like a turbine regulated winding mechanism, telescoping rods instead of minute hands, and tumbling rotors to indicate the hours. The official product sheet bears some of these features out. Through careful analysis of photos and watching videos frame-by-frame, they managed to recreate what they believe to be a functioning mechanical model within their CAD software.

It was then time to try and build the timepiece for real. It was then that [Karel] started hitting some serious stumbling blocks. As a humble engineering student, it’s not often possible to purchase an entire machine shop capable of turning out the tiny, precision parts necessary to make even a basic watch mechanism. Your basic 3D printer squirting hot plastic isn’t going to cut it here. Farming out machining wasn’t an option as the cost would be astronomical. [Karel] instead decided on combining a Miyota movement with a machined aluminum base plate and parts 3D printed using a process known as “Multijet Modelling” which essentially is an inkjet printhead spitting out UV curable polymer.

In the end, [Karel] was able to get just the tumbling hour indicator working. The telescoping minute hand, compressed air turbine winding system, and other features didn’t make it into the build. However, the process of simulating these features within a CAD package, as well as manufacturing a semi-functional replica of the watch, was clearly a powerful learning experience. [Karel] used their passion to pursue a project that ended up giving them a strong grasp of some valuable skills, and that is something that is incredibly rewarding.

We’ve seen others trying to fabricate parts of a wristwatch at home. Keep your horological tips coming in!

[Thanks to Str Alorman for the tip!]