One day there will be no more need for flames. [slider2732] has put yet another nail in the coffin of this most ancient of all technology by making a candle that uses a flicker LED that you blow out. A little more miniaturization and we’ll have them fully integrated into the size of birthday cake candles (Hint hint, hackers!).

You may have seen these candle flicker LEDs.  They have a small chip inside them that modulates the LED’s light to flicker like a candle. We’ve even reported on what [Cpldcpu] found when he reverse engineered them first here and then here.

What [slider2732] did was to buy an electronic candle that used one of the LEDs actually shaped like a flame, and to drill a hole near the ‘flame’. He them embedded a microphone behind the hole. That goes to an LM386 amplifier circuit and from there to an Arduino Pro Mini all powered by a LiPo. As you’d expect, the Arduino code is very simple, just watch the pin from the amplifier and based on an internal variable, turn the LED on or off. We really like how none of the electronics is visible and how you actually have to lean over and blow into the top of the candle to blow it out. You can see this demonstrated in the video below.

END_OF_DOCUMENT_TOKEN_TO_BE_REPLACED

As you might imagine, the manufacturers understood that there was an untapped market for cheaper hardware, so as we entered the new decade a range of budget machines that appeared to satisfy that demand. Gone were internal expansion slots, dedicated monitors and mass storage, for cheap keyboards, domestic TV monitors, and home cassette recorders. 1980s teenagers would have computers of their own, their parents safe in the knowledge they were educational while the kids themselves were more interested in the games. END_OF_DOCUMENT_TOKEN_TO_BE_REPLACED

These days, it’s possible to buy clones of popular 3D printers from China for satisfyingly low prices. As always, you get what you pay for, and while usable, often they require some modification to reach their full potential. [g3ggo] recently laid down €270 for a clone of the Prusa i3 by Geeetech, knowing it would require some modifications for safety and performance.

First on the bill was a wobbly Z-axis, which was dealt with by printing some new parts designed to fix this issue which have already been developed by the community. Forums are your friend here – often an enterprising user will have already developed fixes for the most common issues, and if they haven’t, you can always step up to be the hero yourself. There was a darker problem lurking inside, though.

[g3ggo] began to wonder why the MOSFETs for the hot end were running so hot. It turned out to be an issue of gate drive – the FETs were only being driven with 5V, which for the given part, wasn’t enough to reach its lowest R_DS(on) and thus was causing the overheating issue. It gets worse, though – the heatsinks on the MOSFETs were bolted on directly without insulation, and sitting fractions of a millimeter above traces on the PCB. Unfortunately, with a small scratch to the soldermask, this caused a short circuit, destroying the hot end and MOSFETs and narrowly avoiding a fire. This is why you never leave 3D printers unattended.

The fix? Replacing the MOSFETs with a part that could deal with a 5V gate drive was the first step, followed by using insulating pads & glue to stop the heatsinks contacting the PCB. Now with the cooler running MOSFETs, there’s less chance of fire, and the mainboard’s cooling fan isn’t even required anymore. Overall, for a small investment in time and parts, [g3ggo] now has a useful 3D printer and learned something along the way. Solid effort! 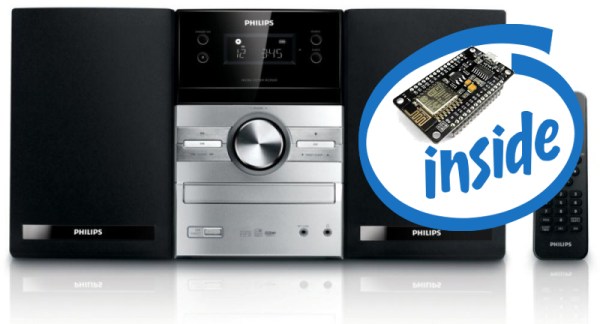 IoT-ifying old stuff is cool. Or even new, offline stuff. It seems to be a trend. And it’s sexy. Yes, it is. Why are people doing this, you may ask: we say why not? Why shouldn’t a toaster be on the IoT? Or a drill press? Or a radio? Yes, a radio.

[Dr. Wummi] just added another device to the IoT, the Internet of Thongs as he calls it. It’s a Philips MCM205 Micro Sound System radio. He wanted to automate his radio but his original idea of building a setup with an infrared LED to remotely control it failed. He blamed it to “some funky IR voodoo”.  So he decided to go for an ESP8266 based solution with a NodeMCU. ESP8266 IR remotes have been known to work before but maybe those were just not voodoo grade.

After opening the radio up, he quickly found that the actual AM/FM Radio was a separate module. The manufacturer was kind enough to leave the pins nicely labelled on the mainboard. Pins labelled SCL/SDA hinted that AM/FM module spoke I²C. He tapped in the protocol via Bus Pirate and it was clear that the radio had an EEPROM somewhere on the main PCB. A search revealed a 24C02 IC in the board, which is a 2K I²C EEPROM. So far so good but there were other functionalities left to control, like volume or CD playing. For that, he planned to tap into the front push button knob. The push button had different resistors and were wired in series so they generated different voltages at the main board radio ADC Pins. He tried to PWM with the NodeMCU to simulate this but it just didn’t work.

END_OF_DOCUMENT_TOKEN_TO_BE_REPLACED

When a claim is made for something being the world’s lightest it is easy to scoff, after all that’s a bold assertion to make. It hasn’t stopped [fishpepper] though, who claims to have made the world’s lightest brushless FPV quadcopter. Weighing in at 32.4 grams (1.143 oz) it’s certainly pretty light.

The frame is a circular design cut from carbon-fiber-reinforced polymer, and on it are mounted four tiny brushless motors. In the center are the camera and battery on a 3D printed mount, as well as custom flight and speed controller boards. There are a series of posts detailing some of the design steps, and the result is certainly a capable aircraft for something so tiny. If you fancy experimenting with the design yourself, the files are available for download on the first page linked above.

There are two aspects to this build that make it interesting to us. First, the lightest in the world claim. We think someone will come along with something a bit lighter, and we can’t wait to see a lightest multirotor arms race. Good things come of technology races, which brings us to the second aspect. Governments are busy restricting the use of larger multirotors, to the extent that in some parts of the world all that will be available for non professionals will be sub-200g toy craft. Any project like this one which aims to push the boundaries of what is possible with smaller multirotors is thus extremely interesting, and we hope the community continue to innovate in this direction if only to make a mockery of any restrictions.

To get some idea of the sort of legislative measures we might be seeing, take a look at our coverage of a consultation in just one country.

END_OF_DOCUMENT_TOKEN_TO_BE_REPLACED

Puzzles provide many hours of applied fun beyond any perfunctory tasks that occupy our days. When your son or daughter receives a snake cube puzzle as a Christmas gift — and it turns out to be deceptively complex — you can sit there for hours to try to figure out a solution, or use the power of Python to sort out the serpentine conundrum and use brute-force to solve it.