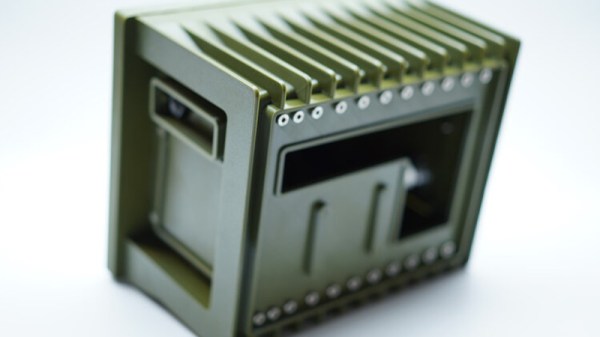 While hackers and makers have a tendency to focus on functionality above all else, that doesn’t mean there isn’t room for some visual flair. A device that works well and looks good will always be more impressive than the bare bones approach, but the extra time and money it usually takes to polish up the visual component of a build means it’s often overlooked. Which is exactly what [Jay Doscher] wanted to address with his Mil-Plastic project.

On the surface, the Mil-Plastic is yet another entry in the rapidly growing and often ill-defined world of cyberdecks: custom computing devices that forgo the standard laptop and desktop dichotomy and instead explore the road not taken by mainstream consumer electronics. To that end, it’s a solid build more than worthy of praise. But more than that, it’s also a lesson on how 3D printing and some clever design can create a truly impressive visual for little more than the cost of a spool of PLA.

The Mil-Plastic, as the name implies, looks like it was pulled from a Humvee or an Abrams tank. While the gorgeous olive green PETG filament that [Jay] has stumbled upon certainly helps, his eye for detail and design chops aren’t to be underestimated. He’s given the case a rugged and armored look that simply screams “Your Tax Dollars At Work”, complete with faux cooling fins running along the back and a generous application of low-profile stainless steel fasteners. We’ve taken a close look at the decadence of military engineering in the past, and the Mil-Plastic could hang with the best of them.

Most importantly, [Jay] has given us all the tools and information we need to recreate the look on our own terms. You don’t have to be in the market for yet another Raspberry Pi gadget to appreciate the Mil-Plastic; the design can serve as the backbone for whatever you happen to be building. The printed case not only looks impressive, but can easily be modified and expanded as needed.

[Jay] kicked off a minor revolution late last year with his Raspberry Pi Recovery Kit, and has continued to produce well-documented designs that illustrate the incredible power of desktop 3D printing. If you can look through his portfolio and not get inspired, you may want to speak with a doctor. 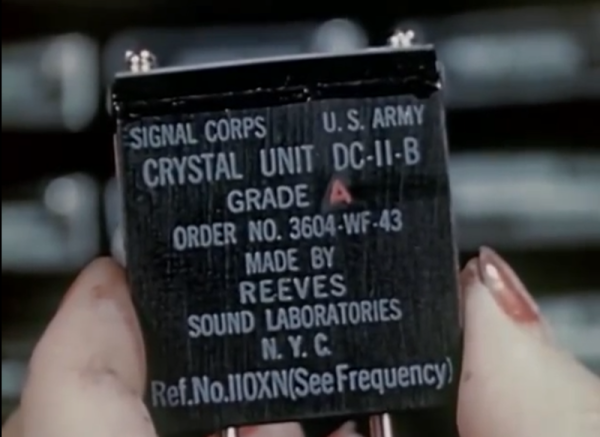 More than one of our readers suggested we highlight this beautifully-shot process documentary about the laborious and precise manufacturing of piezoelectric quartz crystals in the early 1940s. Just a few years later, Bell Labs would perfect a method of growing synthetic crystals, sending droves of brave men and daintily-handed women from the Reeves Sound Laboratories to the unemployment line.

Early radio equipment relied upon tuned or L-C circuits for clocking. These were prone to drift by a few kHz, which prompted the use of crystal oscillators for stable frequencies in the 1920s. The lives of our armed forces and those of our WWII allies depended on reliable communication equipment, so the crystal oscillators they used were top shelf, produced by hand from Brazilian crust.

END_OF_DOCUMENT_TOKEN_TO_BE_REPLACED

[Chris] over at the 23B hackerspace had a bit of a problem – a project required the use of a very old rotary encoder with a mil-spec connector. While it might be possible to simply buy one of these mating connectors on Digikey or Mouser, that’s not [Chris]’ usual MO. He has a nice 3D printer, and this connector is basically a cylinder with some holes. How hard could printing out one of these connectors be?

The dimensions for [Chris]’ first attempt at creating a mating connector came from Solidworks’ “Sketch Picture” command where an image can be superimposed over a model and the 3D features created from that guide. If it worked, it would be far too easy, and the printed model didn’t fit at all.

This failure led [Chris] to page through MIL-STD-1651, a portly tome of 200+ pages covering every circular connector possible.  After 20 minutes of scanning the specs, [Chris] found what he was looking for: the correct specification showing him where all the pins and holes should go.

After some fine modeling in Solidworks, [Chris] had his very own custom printed Mil-Spec connector. Sure, he ate up more time than it was worth for one connector, but now that he has the STL file, he can print out as many as he needs.