Hackaday’s parent company Supplyframe is at Electronica in Munich this week — booth C5-223. On Thursday from 16:00 – 18:00, they’ll be hosting a Hackaday Happy Hour, with a beer and coffee bar, for everyone in the Hackaday community. They’d love to see you and hear what you’re working on, be it for your day job or your night job. 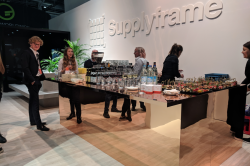 If you missed the #badgelife exhibit at Supercon, it’s here at Electronica. There will also be some of those mysterious cubes you may have heard about. Richard Hogben and Bogdan Rosu will be DJing fresh beats. Stop by and say hi to [Sophi Kravitz], [Majenta Strongheart], [Alek Bradic], and everyone else from the Supplyframe team.

Thanks to everyone who came to the Hackaday Prize Make Munich Meetup and Bring-a-Hack last night! We had a great time, and there were a bunch of cool projects on display, some of which we even got pictures of. Frankly, we were enjoying chatting too much to be peering through a camera lens.

Around 30 people made it over to the Munich CCC, including some familiar faces from the last time we had a party in Munich. Although it was a mostly local crowd, we also had visitors from Switzerland, Austria, and even the US of A: TV-B-Gone inventor, HaD Prize judge, and mad hacker [Mitch Altmann] was in the house.

After we got a little food and drink, we opened up the floor for the projects, lightning-talk style. The largest projects were probably a tie between an own-design CoreXY 3D printer and a boombox with some serious sound output. One guest’s automated bacterial culture apparatus probably wouldn’t have fit on the table, so it’s OK that it got left in the lab. The smallest hack? Probably [Alex]‘s super-mini USB LED clock gizmo, complete with hand-soldered 0402 LEDs, and “even smaller stuff on the backside”.

END_OF_DOCUMENT_TOKEN_TO_BE_REPLACED 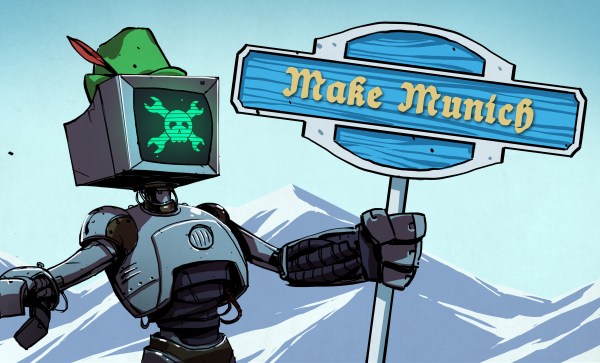 If you’re in Munich, Germany this weekend and you’ve got a sweet hack to show off and a thirst for beer and/or good geeky company, then you’re in luck! Come join Hackaday at the muCCC for a Hackaday Prize Bring a Hack.

The location is Schleißheimer Str. 41, a short walk west along Heßstraße from the Theresienstraße U-Bahn. No reservation is needed, but it’d be swell if you’d let us know in the comments that you’re coming (or better yet, click the “join this event” button in the upper right of the event page) so that we have enough pizza on hand.

The party starts at 20:00, not entirely coincidentally as soon as exhibitor setup at Make Munich closes. So if you’re setting up a booth, come on over to the other side of town where you can show off a small project to a select audience of fellow hackers. If you’re only going to be attending Make Munich, this is a great warm up.

Hackaday’s [Elliot Williams] will be there and taking photos if you’ve got something portable that you’d like to show the world! Otherwise, relax and hang out with kindred spirits. Need a time and place to get a team together for the Hackaday Prize? Here, with beer! (Or Spezi, but nothing rhymes with Spezi.)

Many thanks again to our hosts at Munich’s CCC.

Our trip to Germany wouldn’t be complete without a trip to a proper European hackerspace, and the Munich Chaos Computer Club was more than accommodating in allowing us to invade their space.

Before even walking in the door, you’re greeted with one of the coolest displays you’ve ever seen. Half of the front of their building is a gigantic flipdot display. It’s astonishing in person, and although no dots were flipped during our visit, we can imagine the noise would be deafening. Simply awesome.

Walking in the door, you’re greeted with the general meeting area, conference room, couches, and a Twilight Zone pinball machine. The machine didn’t quite work when we arrived, but within five minutes, [Sprite_TM] was behind the backglass and had everything fixed within an hour.

The back room and basement have the usual assortment of tools – a 3D printer, CNC, lathe, and electronics workbench. If you need a key made, head to the basement. You’ll also find an ATM in the basement. The story with that is that the news station in Munich wanted to do a story on how easy it was to get USB access to the Windows system in an ATM. The station couldn’t do it – but they faked it – and put the ATM up on eBay. Not much money later, the ATM found its way to the space’s basement.

MuCCC is more than just a space with tools, though: in the european hackerspace tradition, there are frequent presentations and talks that would fit in at an academic conference. Last Tuesday, [nicolas] presented a few techniques to protect cryptographic keys from physical integrity attacks, i.e. an evil maid attack or a SWAT team invading your router closet. It’s a daemon that listens to an AVR loaded up with sensors through a GPIO pin. If there is physical intrusion in the device – barometric pressure or light – keys resident in memory can be erased.

You can check out a gallery of pics from the space below.

The stores of Club Mate. There was also a vending machine.

This test equipment was donated, but it’s still amazingly good

No, that’s not a Darwin. It’s close, though, and the only printer of this design I’ve seen at a hackersapce

There’s an ATM in the basement. Apparently, a news station in Munich bought an ATM to demonstrate how easy it is to crack. The news station couldn’t crack it. It was then sold on eBay and wound up at the space. Yes, you can now play Solitaire on it.

[Sprite_TM] came into the space and found a broken Twilight Zone game. 30 minutes later, it was fixed.

Outside of the space.

Somehow, and don’t ask us how, the venue we chose for the Hackaday Prize party was perfect for Hackaday-related shenanigans. There was a Hackerspace right around the corner, a computer history museum in a warehouse nearby, and an amazing video game archive barely 100 meters away from our venue.

The VideoGamingArchive is an amazing collection of video games from the era where video games came in boxes with real manuals, and you needed to be sure you bought the game compatible with your system. Inside, one wall is dedicated to the old cardboard computer boxes, indexed partly by system and partly by how cool they look, while the other wall was dedicated to games from the previous five generations of consoles.

[Nils] was kind enough to give me a tour. You can check that video out below, with some more pics below that. If you’re wondering, yes, that is a sealed copy of Chrono Trigger, and no, I have no idea what it’s worth.

END_OF_DOCUMENT_TOKEN_TO_BE_REPLACED

The Hackaday Prize is here! We know you can’t all be here with us in Munich so we’ve set up a live stream link for everyone to follow along at home. If you tune in now, you can catch some of the talks at our open hardware event! 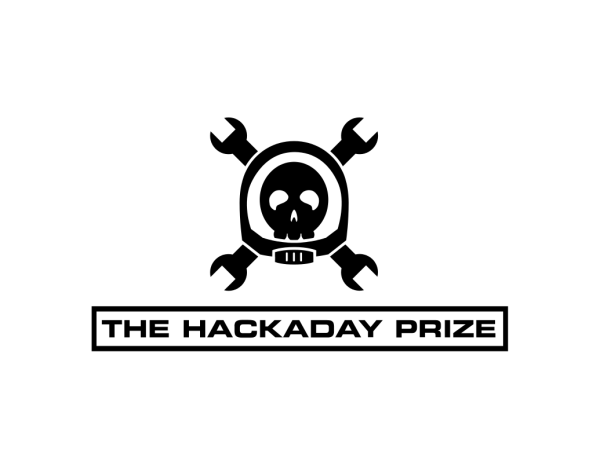 We’re only a few hours away until we announce the winner of The Hackaday Prize. Until then, we have a huge workshop and party to put together. It’s only noon here in Munich, and we’ve been up since the crack of dawn putting stuff together.

The doors open in a little bit, but so far we have people putting together the workshops. [Ben Gray] from Phenoptix is busy putting together a few MeArm robots for a workshop. They take one person 45 minutes to put together. There’s kinda something resembling an assembly line going on:

Hackaday Prize judge [Sprite_TM] made it out to the workshop/party. He’s working on soldering up some Teensy 3.1s for the Moog workshop. There are a ton of parts for this, everything from extremely expensive slide pots to opamps, audio caps, pressure and pulse sensors, and a vintage wah pedal that also has +5v CV expression output. Really cool.

Since we’re announcing the winner of The Hackaday Prize, there was the question of what the trophy should be. Trophies are not utilitarian in any way, so we thought we would put our own spin on this. It’s a PanaVise, emblazoned with a 3D printed plaque. 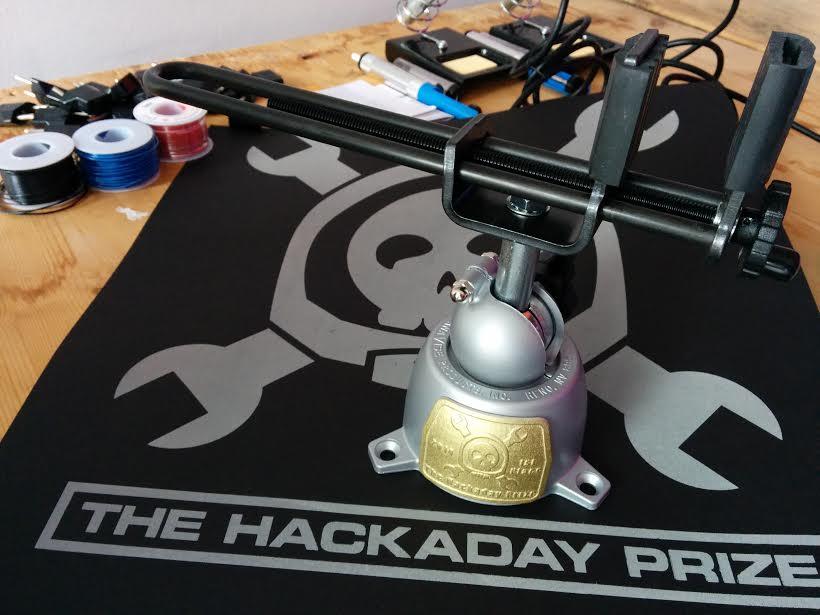 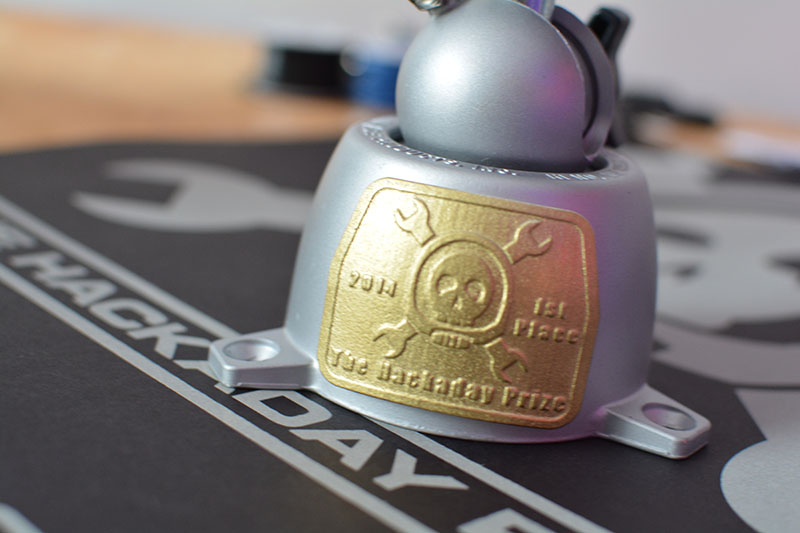 Doors open in a few minutes. More updates to follow