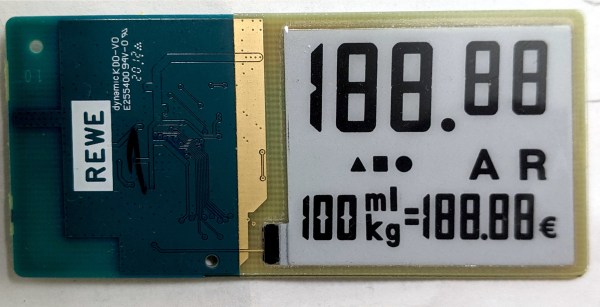 For a monochrome display where refresh rate isn’t particularly important, there’s almost no better option than an E Ink display. They’re available in plenty of sizes and at various price points, but there’s almost no option cheaper than repurposing something mass-produced and widely available like an E Ink (sometime also called eInk or ePaper) price tag. At least, once all of the reverse engineering is complete.

[Dmitry Grinberg] has been making his way through a ton of different E Ink modules, unlocking their secrets as he goes. In this case he set about reverse engineering the unknown microcontroller on the small, cheap display show here. Initial research showed an obscure chip from the ZBS24x family, packaged with a SSD1623L2 E Ink controller. From there, he was able to solder to the communications wires and start talking to the device over ISP.

This endeavor is an impressive deep dive into the world of microcontrollers, from probing various registers to unlocking features one by one. It’s running an 8051 core so [Dmitry] gives a bit of background to help us all follow along, though it’s still a pretty impressive slog to fully take control of the system.

If you happen to have one of these price tags on hand it’s an invaluable resource to have to reprogram it, but it’s a great read in general as well. On the other hand, if you’re more interested in reverse-engineering various displays, take a look at this art installation which spans 50 years of working display technologies. 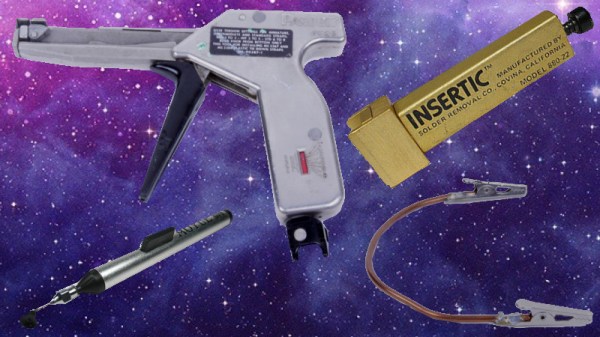 The right tool for the job can turn a total headache into a 30-second operation. This is all the more important when you’re trying to streamline an assembly process, and the reason why you’ll find so many strange and wonderful purpose-built tools on any production line. With a nod to that old adage, [EvilMadScientist] have collected the tools you didn’t know you needed – until now.

If you’re wiring big through-hole boards all day, you’ve probably bemoaned the uneven bends on all your resistors. How did the big companies get it right way back when? They used a tool to set the distance of the resistor legs just right. What about DIP ICs? It’s a total pain trying to take them fresh out of the tube and get them to seat in a socket, but there’s a tool to do that too. It’s actually a two-part series, and while we’re sure you’ve all seen a solder sucker before, the fresh take on helping hands is pretty ingenious.

Overall, it’s a combination of little things that, with a bit of cash or a day’s work, you can have in your own lab and once you’ve got them, you won’t ever want to go back. Be sure to tell us about your favourite obscure tools in the comments.

Now that you’ve got your tools to hand, why not wrap them all up in a handy workstation?

Hackaday readers (and writers) are an odd bunch. While the rest of the tech press falls over for the newest, shiniest CPU on the market, we’re the type who’s more interested the unexplored dark corners of metaphorical Silicon Alley. So when someone comes to us with a good writeup of a chip that we’d never heard about, we’re all ears.

[Remy]’s writeup of the CoolRISC 816 microcontroller CPU makes it obvious that he shares our taste for the esoteric. It has a 22-bit “RISC” instruction set. It has a dedicated 8-to-16 bit multiplier. Some of the instructions are so un-reduced that [Remy] calls bunk on its RISC claims. All of the operations, including the un-RISC ones, run in a single cycle. And the CoolRISC does this by cheating — the last stages of the pipeline run not on every clock tick, but on the rising and falling flanks of the clock respectively.

Why all these odd bits? They make the job of the assembly programmer, or compiler designer, a lot easier. With all single-cycle instructions, counting cycles is the same as counting lines of code. The not-really-RISC instructions are great for compiling C into. So what happened? [Remy] speculates that the MSP430, another not-really-RISC microcontroller that came out about the same time, ate the CoolRISC’s lunch. The MSP430 is a 16-bit machine, and chances are good that you’ve heard of TI. The same may not be true of Xemics, maker of the CoolRISC.

But still it’s nice to have someone saying the eulogy for this strange little chip. Or maybe the reports of the CR816’s death are premature — it seems to be inside TI’s bq20x80 chip that’s used in a number of battery power monitors. Oh, the irony! Indeed, watch [Charlie Miller] tear into a battery and find a CR816.

Have any of you used a CR816? What’s the strangest microcontroller architecture that you’ve ever seen?