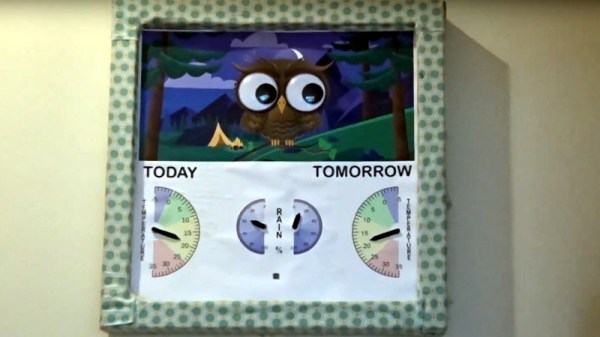 There can be few readers who were young in the 1970s who did not want to share in the adventures of the fearless animated ghost-hunting young crime-fighters of Scooby-Doo. What do you remember from the series though? The Mystery Machine van? Scooby snacks? Or perhaps the improbably haunted theme parks whose owners would have got away with it if it hadn’t been for those pesky kids? For [Alex Shakespeare] it seems to have been the trope of haunted pictures whose subject’s eyes would follow the protagonists around the room, because when he made a wall-mounted weather indicator he gave it an owl with eyes doing just that.

The weather part of the device is straightforward enough, an ESP8266 board drives a set of servos that move dial indicators according to data from the Dark Sky API. The owl’s moving googly eyes are the party piece though, for them the ESP takes input from an Adafruit AMG8833 thermal sensor array and drives a servo and lever arrangement to do the moving. Finally, the thermal camera’s output is available to see on the ESP’s web server. All the details of the project can be found via a GitHub repository.

The result is shown in the video below the break, and as you might expect in the spirit of its inspiration it’s more comedic than haunting. But maybe there’s the root of the popularity of artworks that follow the viewer, of which this is merely the latest in a long line.