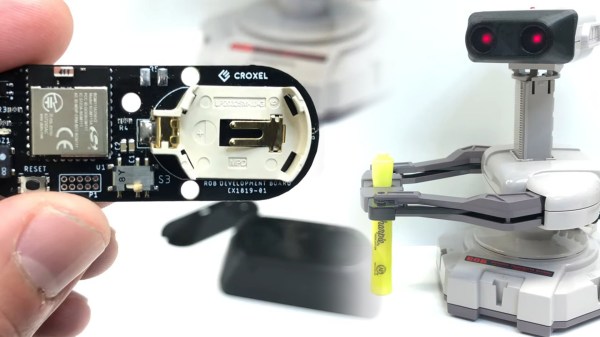 We admit that a hack enabling a 34-year-old video game peripheral to be controlled by a mobile app wasn’t something we were expecting to see today, but if controlling something with something else isn’t the definition of a classic hack, we don’t know what is. The folks at [Croxel Inc.] worked out a way to control R.O.B. using a phone app to demo out their expertise in building hardware and software prototypes, a service they offer at their website.

R.O.B. was a little robot with movable clamp arms bundled with the 1985 release of the NES, an effort by Nintendo of America to drive sales of the console after the gaming crash of 1983 by making it look less like a video game and more like a toy. The robot receives inputs from light sensors in its head, which would be pointed towards the TV playing one of the only two games released with support for it. [Croxel] used this to their advantage, and in order to control the robot without needing a whole NES, they fabricated a board using a BGM111 Bluetooth Low-Energy module which can receive outside inputs and translate them to the light commands the robot recognizes.

To avoid having to modify the rare toy itself and having to filter out any external light, the hack consists of a 3D printed “goggles” enclosure that fits over R.O.B.’s eyes, covering them entirely. The board is fitted inside it to shine the control light into its eyes, while also flashing “eye” indicators on the outside to give it an additional charming 80s look. The inputs, which are promptly obeyed, are then given by a phone paired to the module using a custom app skinned to look like a classic NES controller.

We’ve seen more intrusive hacks to this little robot here on Hackaday, such as this one which replaces the old sluggish motors entirely with modern servos and even plans to reconstruct it from scratch given the scarcity of the originals. It’s interesting to see the ways in which people are still hacking hardware from 35 years ago, and we’re excited to see what they’ll come up with around the 40 or 50 year marks!

[via Gizmodo, thanks Itay for the tip!]

When we introduced you to the Twitter Christmas tree ornaments, sadly we had very little information about the project. Luckily [Rob] made contact and clued us in on the inner workings. It even turns out we were wrong about the usage of Arduinos! We invite you to check out all the juicy inner workings after the break.
END_OF_DOCUMENT_TOKEN_TO_BE_REPLACED