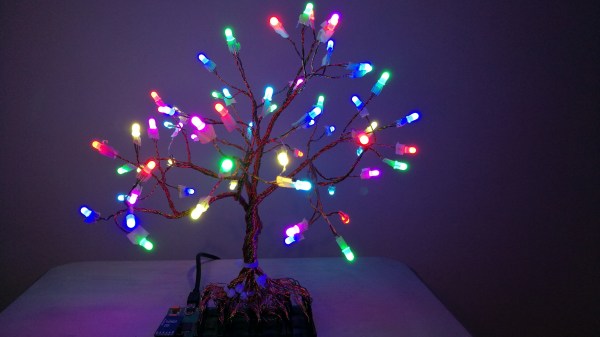 [Paczkaexpress]’s RGB tree is a mix of clever building techniques and artistic form that come together into quite a beautiful sculpture.

The branches of his tree are made from strands of enameled copper wire capped with an RGB LED and terminated in a female header. The separate wires are all wound and sculpted into the form of a tree. The wire is covered in a very thin layer of plastic, which we highly recommend observing under a microscope, that allow it to maintain a uniform and reflective copper color without shorting, adding to the effect.

The part we found an especially pleasing mix of form and function was how the “roots” of the tree clicked home in the PCB base. The PCB holds the STM32, power components, and an LED Driver. It doesn’t hide how the magic works, and the tree really does get its nutrients from the soil it’s planted in. This would be a fun kit to build. Very clever and you can see the final effect after the break.

END_OF_DOCUMENT_TOKEN_TO_BE_REPLACED 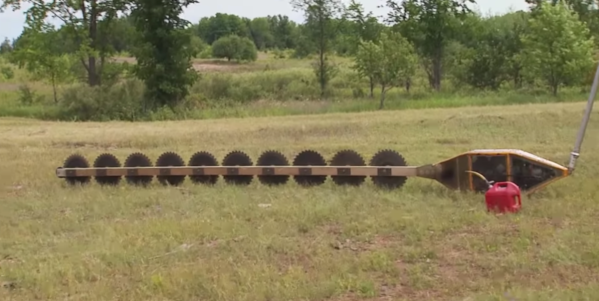 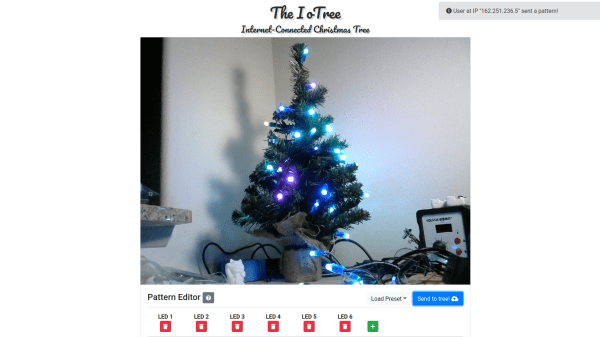 We love IoT gadgets, but are occasionally concerned that they might allow access to the wrong kind of hacker. In this case, [Kevin] has created an IoT tree that allows anyone to control the pattern of lights, and he’s invited you to do so!

We played with the tree a bit, and the web interface is fairly powerful. For each LED, you can select either a random color or a keyframe-defined pattern. For the keyframe LEDs, you can create a number of “keyframes”, each of which is defined by a color and a transition, which can be either linear, quarter sine wave, or instantaneous (“wall”). Additional keyframes can be added for each LED, and if don’t specify a pattern for all the LEDs, the system repeats those you have defined to fill the entire string. There are also a few preset patterns you can choose if you prefer. If you, too, want to play with the tree, don’t delay: it’s only available through the first week of 2019!

Behind the scenes, an aging Raspberry Pi provides the local brains driving the LED controller and streaming the video, while a cloud server running a Redis instance allows communication with the web. The interface to the string of WS2811 LEDs uses [Kevin]’s Kinetis LK26 breakout board, which he managed to get working despite the state of tools and documentation for the Kinetis ARM family. You can read a good discussion of the system on his blog; there are a surprisingly large number of pieces that need to work together. As usual, he provides all the source code for this project on GitHub.

We’ve seen [Kevin]’s work before, including his 73-LED wristwatch, and adventures developing on an STM32 from scratch.

But, if it’s IoT Christmas trees that have got you thinking, you can check out this one from last year. 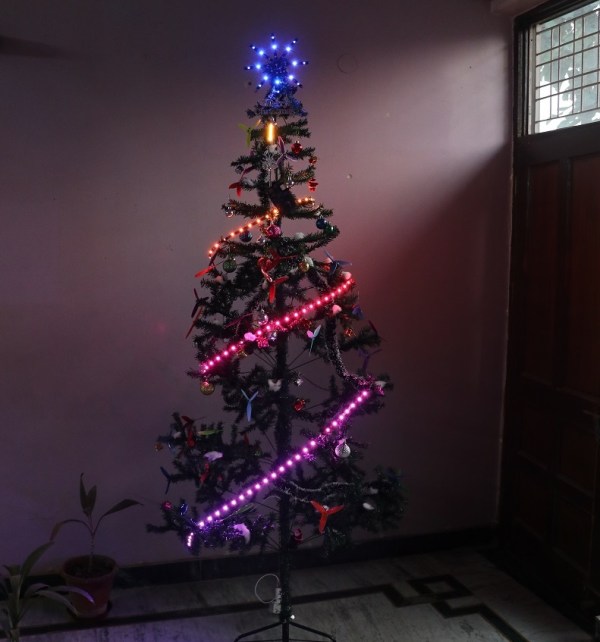 Smart Christmas trees may soon come to mean something more than a fashionably decorated tree. Forging ahead with this new definition, [Ayan Pahwa], with help from [Akshay Kumar], [Anshul Katta], and [Abhishek Maurya] turned their office’s Christmas Tree into an IoT device you can watch live!

As an IoT device, the tree relies on the ever-popular ESP8266 NodeMCU — activated and controlled by Alexa, as well as from a web page. The LEDs for the tree — and the offline-only tree-topper controlled by an Arduino Pro Mini — are the similarly popular Neopixels.

For those viewing online, a Raspberry Pi and camera have been attached to this project to check out the tree’s lighting. To make that possible, [Pahwa] had to enlist the use of ngrok to make the Pi’s –normally — LAN-only camera server accessible over the internet. The aforementioned web page was coded in Javascript/CSS and hosted on a server running an instance of Ubuntu 16.04.

END_OF_DOCUMENT_TOKEN_TO_BE_REPLACED 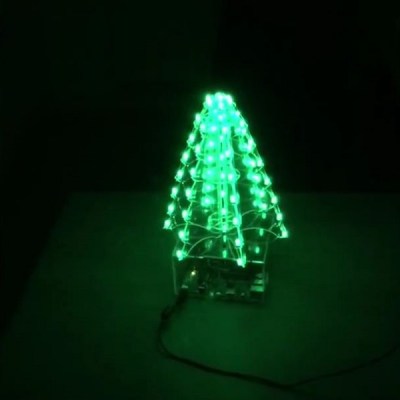 A Raspberry Pi 3 and Arduino Uno make this in league with some pretty smart Christmas trees. MAX6968 5.5V constant-current LED driver chips and MOFSETs round out the control circuit. During the build, the central LED column provided a significant challenge — how often do you build a custom jig to solder LEDs? That done, it’s time for a good ol’-fashioned assembly montage! The final product can cycle through several different lighting animations in a rainbow of colours — perfect for a festive build. END_OF_DOCUMENT_TOKEN_TO_BE_REPLACED 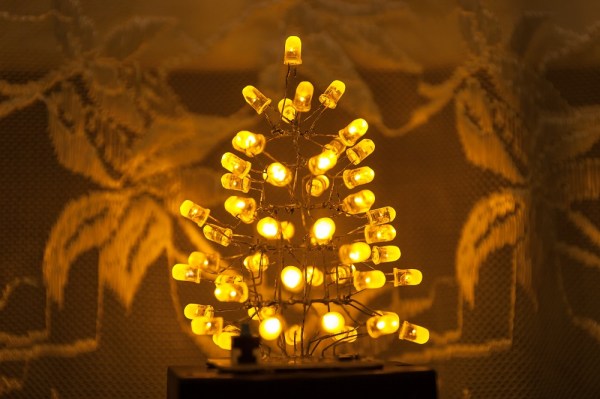 Soon the most wonderful time of the year will be upon us. Families all over the globe will gather together to exchange gifts, eat good food and enjoy some quality time with each other. For many, it will be the first time they’ve seen each other since the last holiday season. For us hackers –  this translates to a time we get to talk about ourselves and show off a little about what we do. Been taking it easy this year? Have no hacks to talk about? Well, it’s not too late! Break out the soldering iron and whip up the perfect conversation starter – an LED Christmas tree!

[Gumix] took a handful of those flickering LEDs and a step down DC-DC converter to make his simple but elegant tree. No microcontroller here… no code is running. As soon as power is applied, the flickering LEDs do all the work to create a visual delight.

Flickering LEDs have been the focus of a few hackers. They’re basically LEDs designed to flicker like a real candle. [cpldcpu] hooked a scope to one and guessed that a linear shift-register was responsible for the randomness behind the flickering, which would be confirmed several months later.

Be sure to check out [Gumix] LED tree and the video demonstration below.

END_OF_DOCUMENT_TOKEN_TO_BE_REPLACED 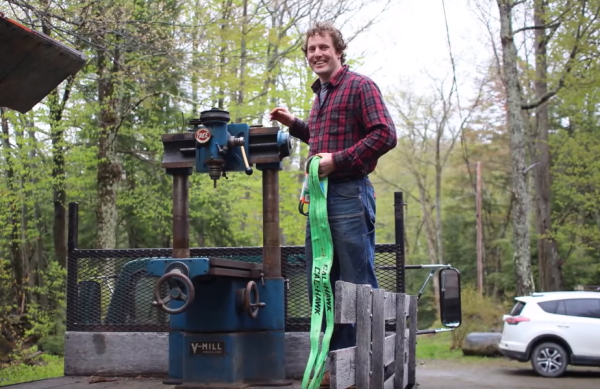 [diyVT] found a real white elephant in this milling machine from Craigslist. It cost him only $200, cheap for a small mill, so it was worth the gamble. We’re not sure what to call this — it’s not exactly a gantry mill, not a horizontal mill, and definitely not a knee mill. The tag says V-Mill, made by either Pierce West or Tree Tool and Die Works, depending on which ID plate you read. The Tree has a three-phase motor, but it came with a phase converter, so it should be good to run on single phase 220 volt household power.

The machine was in good physical shape, at least until the previous owner attempted to move it out of the garage. During the move one of the cast iron chain drive handwheel brackets broke into three pieces. Cast iron is no fun to weld. It has to be pre-heated, welded with nickel rod, and slowly cooled. Some hackers would have given up or built a new part, but [diyVT] accepted the challenge. He put the puzzle pieces back together, grooved them out with an angle grinder, and welded everything. The result wasn’t pretty, but it only has to take the force of the handwheel and the 200 lb gorilla spinning it.

After a bit of work on the motor and head, including a new belt, this tree was ready to cut. [diyVT] snuck out of a family bar-b-que to cut his first chips on the new (to him) machine.