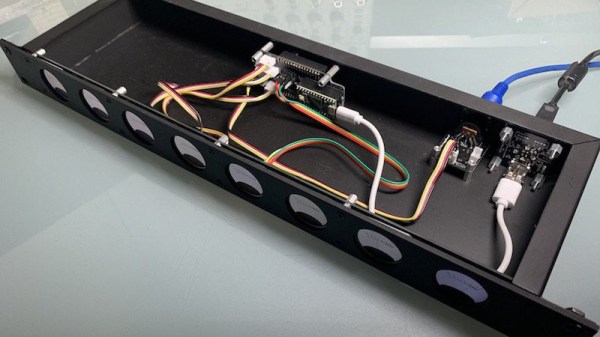 Like many of you, we’re intrigued by the possibilities offered by the availability of affordable round LCD panels. But beyond the smartwatches they were designed for, it’s not always easy to come up with an appropriate application for such non-traditional displays. Digital “steam gauges” are one of the first ideas that come to mind, so it’s perhaps no surprise that’s the direction [Tom Dowad] took his project. But rather than just one or two gauges, he decided to go all out and put eight of them in a 1U rack mountable unit.

What do you need eight faux-analog gauges for? Beats us, but that’s not our department. Now [Tom] has a whole row of indicators that can be used to show whatever it is he likes to keep an eye on. The fact that the device is actually controlled via MIDI may provide us a clue that there’s a musical component at play (no pun intended), but then, it wouldn’t be the first time we’d seen MIDI used simply as a convenient and well supported way of synchronizing gadgets. END_OF_DOCUMENT_TOKEN_TO_BE_REPLACED 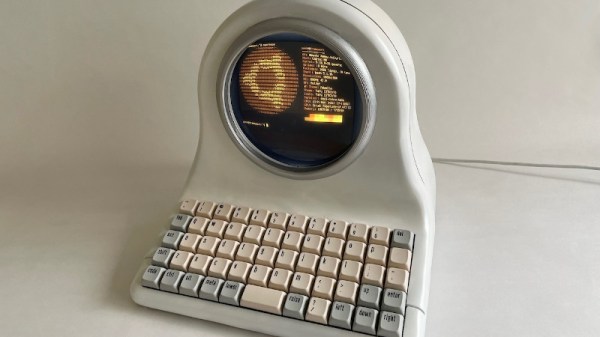 The Framework laptop is already a very exciting prospect for folks like us — a high-end computer that we can actually customize, upgrade, and repair with the manufacturer’s blessing? Sounds like music to our ears. But we’re also very excited about seeing how the community can press the modular components of the Framework into service outside of the laptop itself.

A case in point, this absolutely gorgeous retro-inspired computer built by [Penk Chen]. The Mainboard Terminal combines a Framework motherboard, five inch 1080 x 1080 round LCD display, and OLKB Preonic mechanical keyboard into a slick 3D printed enclosure that’s held together with magnets for easy access. Compared to the Raspberry Pi that we usually find tucked into custom computer builds like this, the Framework board offers incredible performance, not to mention the ability to run x86 operating systems and software. 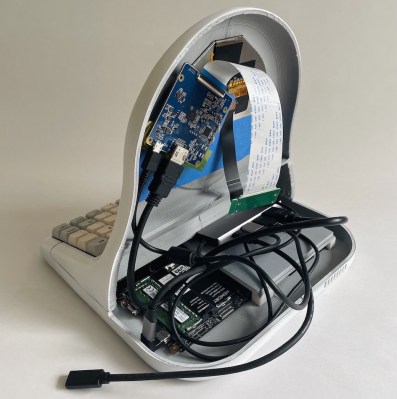 [Penk] has Ubuntu 22.04 LTS loaded up right now, and he reports that everything works as expected, though there are a few xrandr commands you’ll need to run in order for the system to work properly with the circular display. The standard Ubuntu UI doesn’t look particularly well suited to such an unusual viewport, but we imagine that’s an issue you’ll have to learn to live with when experimenting with such an oddball screen.

It was just a few weeks ago that we brought you word that Framework was releasing the mechanical drawings for their Mainboard module, and we predicted then that it would be a huge boon to those building bespoke computers. Truth be told we expected a cyberdeck build of some sort to be the first one to hit our inbox, but you certainly won’t catch us complaining about seeing more faux-vintage personal terminals.