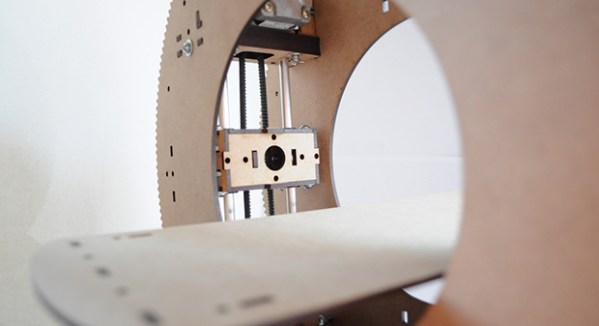 For [Peter Jansen], the most interesting course in grad school was Advanced Brain Imaging; each class was a lecture followed by a trip to the imaging lab where grad students would take turns being holed up in a MRI machine. A few years into his doctorate, [Peter] found himself in a very opportune situation – his local hackerspace just acquired a shiny new laser cutter, he had some free time on his hands, and the dream of creating a medical imaging device was still in the back of his mind. A few weeks later, the beginnings of an open source CT scanner began to take shape.

This isn’t an MRI machine that [Peter] so fondly remembered from grad school. A good thing, that, as superconducting magnets chilled with liquid helium is a little excessive for a desktop unit. Instead, [Peter] is building a CT scanner, a device that takes multiple x-ray ‘slices’ around an axis of rotation. These slices can then be recompiled into a 3D visualization of the inside of any object.

The mechanics of the build are a Stargate-like torus with stepper motor moving back and forth inside the disk. This, combined with the rotation of the disk and moving the bed back and forth allow the imager to position itself anywhere along an object.

For the radioactive detector, [Peter] is using a CCD marketed as a high-energy particle detector by Radiation Watch. Not only does this allow for an easy interface with a microcontroller, it’s also much smaller than big, heavy photomultiplier tubes found in old CT scanners. As for the source, [Peter] is going for very low intensity sources, most likely Barium or Cadmium that will take many minutes to capture a single slice.

The machine operates just above normal background radiation, so while being extremely safe for a desktop CT scanner, it is, however, very slow. This doesn’t bother [Peter], as ‘free’ time on a CT scanner allows for some very interesting, not seen before visualizations, such as a plant growing from a seed, spreading its roots, and breaking the surface as a seedling.

[Peter] still has some work to do on his desktop CT scanner, but once the stepper motor and sensor board are complete, he should be well on his way towards scanning carrots, apples, and just about everything else around his house. Welcome to the ACKspace in Heerlen. So far this has been one of the coolest hackerspaces we have visited — and super hospitable! What makes this space really neat is the location. It’s on the first floor of a mostly empty office building. They have three official rooms on the first floor. The Hackspace, the Slackspace, and the Stackspace — quite self-explanatory.

END_OF_DOCUMENT_TOKEN_TO_BE_REPLACED END_OF_DOCUMENT_TOKEN_TO_BE_REPLACED

If you’re using an AVR microcontroller and you’d like to add USB to a project, there are a lot of options out there for you. Both LUFA and V-USB add some USB functionality to just about every AVR micro, but if you’d like a native serial port, your only options are to look towards the USB-compatible Atmel micros.

[Ray] looked at the options for adding a USB serial port and didn’t like what he saw; seemingly, this was an impossible task without a second, more capable microcontroller. Then he had an idea: if the goal is only to transfer data back and forth between a computer and a microcontroller, why not write an HID-class USB serial port?

[Ray] based his project on The V-USB library and created a new HID descriptor to transfer data between a micro and a computer. While it won’t work with a proper terminal such as Putty, [Ray] managed to whip up a serial monitor program in Processing that’s compatible with Windows, Linux and OS X.

In the video below, you can see [Ray] using an ATmega328p with a standard V-USB setup. He’s transferring analog values from a photoresistor as a proof of concept, but just about everything that would work with a normal serial port will work with [Ray]’s library.

END_OF_DOCUMENT_TOKEN_TO_BE_REPLACED The latest Hackaday Hackerspace Henchmen entry comes from [Bremster] and the Connecticut Hackerspace. He mentions that he’s been meaning to write about the PCB/engraving mill used at the hackerspace for some time, but it was the HHH program which motivated him to do so. Yay! That’s exactly what we envisioned with this and we hope there are more submissions which will encourage us to continue and expand the program.

We think this is a perfect CNC project for any hackerspace whose members are into electronics. It’s compact, and we find milling PCBs to be more desirable than chemically etching them; the tool should get quite a bit of use. This particular build uses x, y, and z axis hardware which was pulled separately from unknown machinery. Like any good hacking project, the fabrication process was so addictive that [Bremster] stayed at the space all night, breaking at 5am to shower and eat before heading to work.

It originally used a Dremel rotary tool but had too much play in the mounting mechanism. When they replaced it with the motor shown above they also machined an aluminum bracket that dramatically stabilizes the cutting bit. This results in clean PCBs, and they’ve even used it to make stamps for their hackerspace passports. There is an enclosure attached, which has been hinged to the right for the two images above.

Check out the demo video below, and get your own CNC submission in for the HHH program before the October 31st deadline.

END_OF_DOCUMENT_TOKEN_TO_BE_REPLACED

I’ve said this before, and I’ll say it again: if you’re using a 3D printer to make a few hundred identical plastic parts, you’re doing it wrong. That’s the place for traditional manufacturing methods such as injection molding or resin casting. If, however, you’re looking at printing a few dozen identical plastic parts, or even running a script to optimize your machine time, the current open source 3D printer world leaves one thing to be desired.

An Automated Build Platform is a fairly simple idea: put a conveyor belt on your heated bed, and when the print is done, send a command to drive a motor, dumping the newly printed part into a bin, The printer then begins the next part with a clean bed, and the days of doting over a 3D printer soon fade into the past.

For such a simple and useful idea, it’s surprising there hasn’t been much done with this idea in open source circles. There are, of course, problems both technical and legal, but hopefully nothing that should indefinitely derail anyone who would want to create the first open source automated build platform.

END_OF_DOCUMENT_TOKEN_TO_BE_REPLACED This place is cool. It’s a 4 story house with a lot of character… and characters! It was one of the first hackerspaces in Belgium and spawned many of the other ones very quickly. We’re on the left, rocking their cool dude shirts!