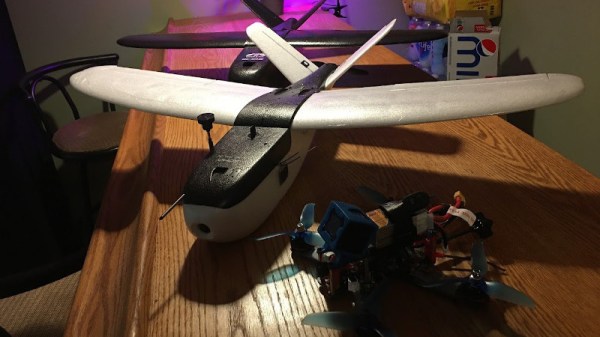 When lost hiking out in the back country, a cell phone might not seem like the most useful tool. Absent a signal from the cellular network, it’s not possible to make outgoing calls for help. However, carrying your phone may just make it a lot easier for rescuers to find you, and [Eric] is making a tool to do the job.

[Eric]’s project is named ResQ, and aims to find lost hikers by detecting the beacon packets from a cellphone’s WiFi adapter. The project comes in two forms; a handheld unit with a directional Yagi antenna, and a drone-mounted unit that can overfly terrain to scan for signals.

ResQ is built around the ESP8266, which is a cheap and accessible way to build a custom WiFI scanner. Currently, the system is able to detect WiFi devices and log MAC addresses along with timestamps and GPS location data to an SD card to help rescuers locate lost individuals. Future plans involve adding a live downlink to the drone such that any pings can be reported live for rescuers to investigate.

Similar systems exist commercially, primarily working with cell signals rather than WiFi. Costs are prohibitively high for many organisations though, so we can see ResQ filling in gaps as a useful tool to have. We’ve featured other radio gear for search and rescue before, too. Video after the break.

END_OF_DOCUMENT_TOKEN_TO_BE_REPLACED

The wheel is a revolutionary invention — as they say — but going back to basics sometimes opens new pathways. Robots that traverse terrain on legs are on the rise, most notably the Boston Dynamics Big Dog series of robots — and [Ghost Robotics]’ Minitaur quadruped aims to keep pace.

One of [Ghost Robotics] founders, [Gavin Knneally] states that co-ordination is one of the main problems to overcome when developing quadruped robots; being designed to clamber across especially harsh terrain, Minitaur’s staccato steps carry it up steep hills, stairs, across ice, and more. Its legs also allow it to adjust its height — the video shows it trot up to a car, hunker down, then begin to waddle underneath with ease.