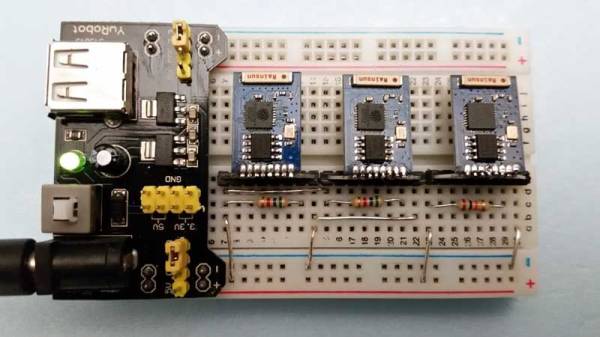 There seems to be a hacker maxim that whatever gadget you are working with, it would be better to have several of them running together. That might explain the ESP8266 web server farm that [Eldon Brown] has built. Yup, a web server farm made from three of everyone’s favorite WiFi dongle, the humble ESP8266.

Eldon’s server farm is currently serving web pages here, running on three ESP8266 boards. Or it was before this posting reduced it to a smoking ruin (screenshot below just in case). Each module is running a dynamic web page and some clever programming he came up with that makes transferring data over these cheap devices quicker.

His page isn’t anything too fancy but it is impressive considering it is running on about $30 worth of hardware, including the breadboard it is wired into. The page includes dynamically-generated graphics and some back-end stuff. I don’t think that it will replace any LAMP servers anytime soon (the ESP8266 took about 2.6 seconds to generate the page below), but it is an impressive hack. [Eldon] has made the full code of the web server that is running the pages available. So, lets add web server farm to the list of things that this neat little device can handle, next to plant weigher, Bitcoin price tracker, MP3 player and many more…

Thanks to [PuceBaboon] for the tip!

END_OF_DOCUMENT_TOKEN_TO_BE_REPLACED

Normally case mods are all show and no go, but [Fredrik Perman] and [Michael Stabile] took their old render farm and made it a working showcase for the front lobby. This is a perfect combination of function, beauty, and practicality. It is a great conversation piece, allows easy working access, and provides a tremendous space savings in one sweet looking wall-mounted case. The frame is aluminum, the back consists of sheets of polished diamond plate, with a clear acrylic sheet for a cover. The case sides are left open to allow the blue LED fans to circulate air. Cooling a render farm crammed in a closet can be quite difficult, but isn’t a problem with this open design. This build is also much prettier and maybe more manageable than the setup in ExtremeTech’s Build Your Own Render Farm article.

There are a few more pictures after the break.