Amateur radio operators have a saying: When all else fails, there’s ham radio. And that’s true, at least to an extent — knock out the power, tear down the phone lines, and burn up all the satellites in orbit, and there will still be hams talking about politics on 40 meters. The point is, as long as the laws of physics don’t change, hams will figure out a way to send and receive messages. In honor of that fact, the police in the city of Pune in Maharashtra, India, make it a point to exchange messages with their headquarter using Morse code once a week. The idea is to maintain a backup system, in case they can’t get a message through any other way. It’s a good idea, especially since they rotate all their radio operators through the Sunday morning ritual. We can’t imagine that most emergency services dispatchers would be thrilled about learning Morse, though.

Just because you’re a billionaire with a space company doesn’t mean you’re an astronaut. At least that’s the view of the US Federal Aviation Administration, which issued guidelines pretty much while Jeff Bezos and his merry band of cohorts were floating about above the 100-km high Kármán line in a Blue Origin “New Shepard” rocket. The FAA guidelines make it clear that those making the trip need to have actually done something to qualify as an astronaut, by “demonstrated activities during flight that were essential to public safety, or contributed to human space flight safety.” That’s good news to the “Old Shepard”, who clearly was in control of “Freedom 7” during the Mercury program. But the Bezos brothers, teenager Oliver Daemen, and Wally Funk, one of the “Mercury 13” group of women who trained to be NASA astronauts but never got to fly, were really just along for the ride, as the entire flight was automated. It doesn’t take away from the fact that they’ve been to space and you haven’t, of course, but they can’t officially call themselves astronauts. This goes to show that even billionaires can just be ballast too.

Good news, everyone — if you had anything that was being transported aboard the Ever Given, your stuff is almost there. The Suez Canal-occluding container ship finally made it to its original destination in Rotterdam, approximately four months later than originally predicted.  After plugging up the vital waterway for six days last March, the ship along with her cargo and her crew were detained in Egypt’s Great Bitter Lake, perhaps the coolest sounding body of water in the world next to the Dead Sea. Legal squabbling ensued at that point, all the while rendering whatever was in the 20,000-odd containers aboard the ship pretty much pointless. We’d imagine that even with continuous power, whatever was in the refrigerated containers must be pretty nasty by now, so there’s probably a lot of logistics and clean-up left to sort out.

I have to admit that I have a weird love of explosive bolts. I don’t know what it is, but the idea of fasteners engineered to fail in a predictable way under the influence of pyrotechnic charges just tickles something in me. I mean, I even wrote a whole article on the subject once. So when I came across this video explaining how the Space Shuttles were held to the launch pad, I really had to watch it. Surprisingly, the most interesting part of this story was not the explosive aspect, but the engineering problem of supporting the massive vehicle on the launch pad. For as graceful as the Shuttles seemed once they got into orbit, they really were ungainly beasts, especially strapped to the external fuel tank and booster. The scale of the eight frangible nuts used to secure the boosters to the pad is just jaw-dropping. We also liked the idea that NASA decided to catch the debris from the explosions in a container filled with sand.

There’s much news from the Jezero Crater on Mars this week, and all of it was good. Not only did the Ingenuity helicopter make history by making the first powered, controlled flight of an aircraft on another planet, it made a second longer, more complex flight just a couple of days later. This time, the autonomous rotorwing craft flew to a higher altitude than the maiden flight, hovered for a bit longer, and made a lateral move before landing safely again on the surface. Three more flights of increasing complexity (and risk) are scheduled over the next two weeks, with the next set to happen early Sunday morning. I have to admit that even though the Ingenuity tech demonstration seemed a little like a publicity stunt when I first heard about it, especially when compared to the Perseverance’s main mission of searching for evidence of life on Mars, the Ingenuity team’s successes have made a believer out of me.

Speaking of technology demonstrations, NASA fired up the MOXIE experiment aboard Perseverance for the first time. Intended to explore the possibility of producing oxygen from the thin carbon dioxide-rich Martian atmosphere, the Mars Oxygen In-Situ Resource Utilization Experiment made about 5.4 grams of oxygen total at a rate of about 6 grams an hour. We detailed the technology MOXIE uses, called solid-oxide electrolysis, which depends on a scandium-stabilized zirconium oxide ceramic electrolyte to strip the oxygen from superheated carbon dioxide using an electric current. Should the technology prove itself over the planned total of ten MOXIE runs over the next few months, a scaled up version of the device could someday land on Mars and produce the estimated 55 metric tons of oxygen needed to fuel a return trip from a crewed mission.

By now we’ve all heard about the global semiconductor shortage, or perhaps felt the pinch ourselves while trying to procure parts for a build. It’s easy to count the crunch as yet another follow-on from the COVID-19 shutdowns and the logistics woes the pandemic begat, so one might have hope that with lockdowns easing up around the world, the shortage will soon be over as manufacturers ramp up production. But not so fast — it looks like the machines needed to make the chips are the latest victims of the shortage. According to Nikkei Asia, wire bonding machines, wafer dicers, and laser drilling machines are all in short supply, with orders for new machines booked out for a year. Like toilet paper this time last year, chip makers are hoarding machines, ordering 50 or 100 of them at a time, in the hopes of having enough to meet production goals. And when machines are available, travel restrictions are making it difficult to get on-site installation and support from factory reps. The bottom line — this isn’t over yet, not by a long shot.

We all know the Stack Overflow memes, and few of us who are being honest haven’t squirmed a bit when thinking about just how screwed we’d be without being able to copy a bit of code to get us past that rough part in a project. But just how often do people copy code from Stack Overflow? Quite a lot, actually, if SO’s analysis of the use of copy commands on their pages is to be believed. For two weeks, SO monitored the number of times the Ctrl-C (or Command-C, if that’s your jam) key combination was pressed. They toted up over 40 million copies, most often from the answers to questions and almost always from the code blocks within them. We suppose none of this is exactly unexpected — memes are memes for a reason, after all — but what we found surprising is that one in four visitors to Stack Overflow copied something within five minutes of loading a page. Being charitable, we’d say the speed with which coders accept someone else’s work is an indication that maybe they were almost at an answer themselves and just needed a little reminder. On the other hand, it could be a sign of separation driving them to get something working.

And finally, while we know we’ve recommended videos from Grady at Practical Engineering recently, we couldn’t help but plug another of his videos as a must-watch. This time, Grady tackles the Suez Canal blockage, and he presents it in the same dispassionate, informed way that he previously handled the engineering roots of the Texas blackouts. If you think the Ever Given grounding was just a case of poor seamanship, think again — Grady makes a compelling case for possible hydrodynamic causes of the incident, including “squatting” and the bank effect. He also speculates on the geotechnical forces that held the ship fast, in the process of which he helpfully introduces the concept of dilatancy and how it explains the way your feet seem to “dry out” a zone around them as you walk across the beach.

END_OF_DOCUMENT_TOKEN_TO_BE_REPLACED 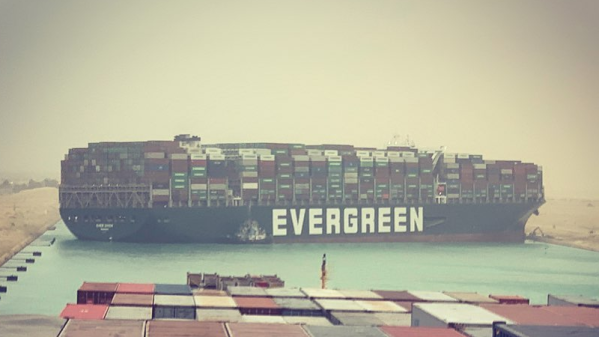