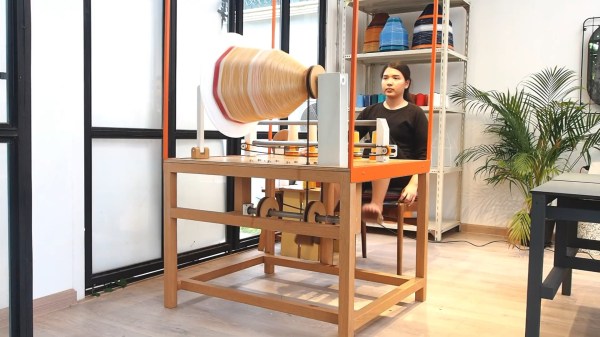 While you could 3D print a lampshade, there’s something to be said for having a more active role in the process of creating an object. [THINKK Studio] has made custom lampshades as easy as riding a bike.

The Lanna Factory was inspired by the cotton ball string lamps sold by vendors in Thai flea markets. Bangkok-based [THINKK Studio] wanted to build a device to let anyone have a hand (and feet) in making a custom lampshade without any experience. Five spools of thread are routed through a “glue case” and onto a spindle holding a lampshade mold. Pedals control the wrapping speed and the location on the shade being wrapped is controlled with a hand wheel on the table.

Once the glue dries, the shade can be removed from the mold and fitted with the appropriate hardware. Giving the user control over the process means that each lampshade will be unique and the final product will mean that much more to the person who made it.

If you’re thinking this would be cooler in carbon fiber, than maybe you should checkout the X-Winder.

END_OF_DOCUMENT_TOKEN_TO_BE_REPLACED 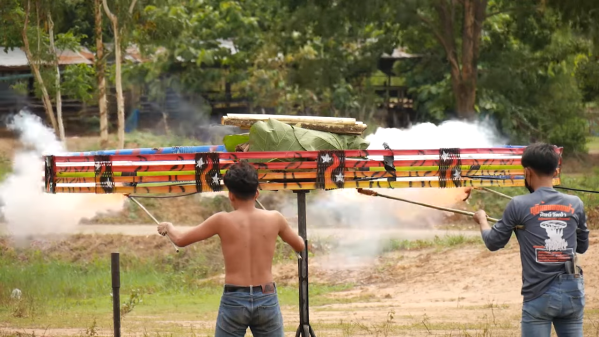 Every once in a while, we here at Hackaday stumble across something that doesn’t quite fit in with all the other amazing hacks we feature, but still seems like something that our dear readers need to see as soon as possible. This video of homemade rockets in Thailand is one of those things.

It comes to us from our friend [Leo Fernekes], who documents a form of amateur rocketry that makes the Estes rockets of our youth look pretty tame. It’s far easier to watch than it is to describe, but for a quick summary, the rockets are bamboo rings with a steel pipe across the diameter. The pipe is packed with homemade gunpowder and provided with nozzles that create both thrust and rotation. When ignited by torches touched to seriously sketchy primers, the rocket starts to spin up, eventually rising off the launch pad and screwing itself into the sky on a twisting column of gray smoke.

At three or four meters across, these are not small vehicles. Rather than letting a steel pipe plummet back to Earth from what looks like several hundred meters altitude, the rocketeers have devised a clever recovery system that deploys a parachute when the rocket motor finally melts through some plastic straps. The use of banana tree bark as a heat shield to protect the parachute is simple but effective; which is really the way you can describe the whole enterprise. [Leo] has another way to describe it: “Dangerously negligent madness,” with all due respect and affection, of course. It looks like a big deal, too — the air is obviously filled with the spirit of competition, not to mention the rotten-egg stench of gunpowder.

Should you try this at home? Probably not — we can think of dozens of reasons why this is a bad idea. Still, it’s amazing to watch, and seeing how much altitude these cobbled-up rockets manage to gain is truly amazing. Hats off to [Leo] for finding this for us.

END_OF_DOCUMENT_TOKEN_TO_BE_REPLACED 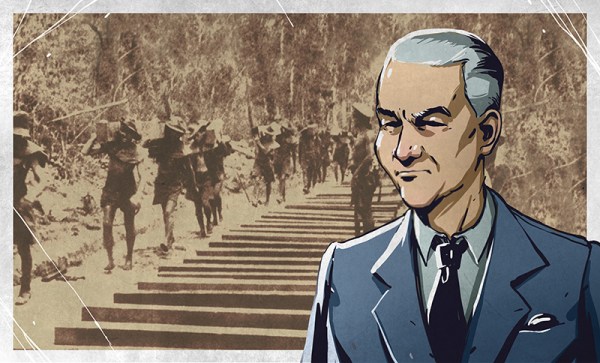 In the early days of World War II, the Japanese army invaded Burma (now Myanmar) and forced an end to British colonial rule there. Occupying Burma required troops and massive amounts of materiel, though, and the Japanese navy was taking a beating on the 2,000 mile sea route around the Malay Peninsula. And so it was decided that a railway connecting Thailand and Burma would be constructed through dense tropical jungle over hilly terrain with hundreds of rivers, including the Kwae Noi River, made famous by the Hollywood treatment of the story in The Bridge on the River Kwai. The real story of what came to be known as the Burma Death Railway is far grislier than any movie could make it, and the ways that the prisoners who built it managed to stay alive is a fascinating case study in making do with what you’ve got and finding solutions that save lives.

Nutrition from Next-to Nothing

Labor for the massive project was to come from the ultimate spoil of war – slaves. About 250,000 to 300,000 slaves were used to build the Burma-Siam Railway. Among them were about 60,000 Allied prisoners of war, primarily Australian, Dutch, British and American. POWs were singled out for especially brutal treatment by the Japanese and Korean guards, with punishment meted out with rifle butt and bamboo pole.

With the POWs was Doctor Henri Hekking, who had been born and raised in the former Dutch East Indies colony of Java (now Indonesia). He had spent his early years with his grandmother, a master herbalist who served as “doctor” for the native villagers. Inspired by his oma’s skill and convinced that the cure for any endemic disease can be found in the plants in the area, Dr. Hekking returned to Java as an officer in the Dutch army after completing medical school in the Netherlands.

After his capture by the Japanese, Dr. Hekking did everything he could to help his fellow POWs despite the complete lack of medical supplies, all the while suffering from the same miserable treatment. Hekking realized early on that the starvation rations the POWs endured were the main cause of disease in the camps; a cup of boiled white rice doesn’t provide much energy for men building a railway by hand in jungle heat, and provides none of the B vitamins needed by the body.

END_OF_DOCUMENT_TOKEN_TO_BE_REPLACED Thailand is dealing with horrible flooding right now. Despite the hardship, people still need to get around and go on with life so many have come up with clever hacks to make this disaster more manageable. [Jan] wrote in to let us know about this collection of flood-related hacks which he’s put together. They are wide-ranging, and many brought a smile to our faces, starting this the plastic-bag enclosed cars (not pictured).

We pulled out three of them to highlight above. On the top left is a canine life vest fashioned out of empty drinking bottles mounted on some type of harness. We hope the pets can stay out of the flood waters but this is a nice precaution. Speaking of precautions, the rubber-ducky to the right of that image is an electrical hazard detector. Float it in the water and an alarm and LED will go off if AC current is detected.  Finally, the image on the bottom shows a bridge constructed in front of a shopping center by turning carts on their backs and lining the pathway with wooden pallets.

There are several floating and amphibious vehicle hacks in the collection. So far we haven’t seen any drill-powered trolling motors though.