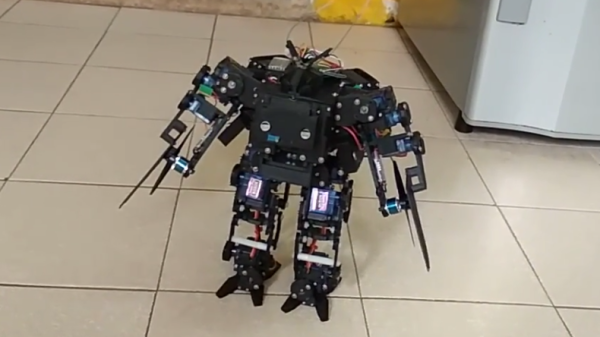 [Project Malaikat] is a 3D printed hybrid bipedal walker and quadcopter robot, but there’s much more to it than just sticking some props and a flight controller to a biped and calling it a day. Not only is it a custom design capable of a careful but deliberate two-legged gait, but the props are tucked away and deployed on command via some impressive-looking linkages that allow it to transform from walking mode to flying mode.

Creator [tang woonthai] has the 3D models available for download (.rar file) and the video descriptions on YouTube contain a bill of materials, but beyond that there doesn’t seem to be much other information available about [Malaikat]. The creator does urge care to be taken should anyone use the design, because while the robot may be small, it does essentially have spinning blades for hands.

Embedded below are videos that show off the robot’s moves, as well as a short flight test demonstrating that while control was somewhat lacking during the test, the robot is definitely more than capable of actual flight.

END_OF_DOCUMENT_TOKEN_TO_BE_REPLACED

Ever dreamed of a real, life-sized Transformer in your garage? The Turkish startup Letrons now offers you exactly that: Their animatronic Autobot drives like a car, transforms like a Transformer, and supposedly fights off space threats with its built-in smoke machine and sound effects.

Letrons’s Transformer seems to be built upon a BMW E92 coupé chassis. According to the company, the beast is packed with powerful hydraulics and servo motors, allowing it to transform and move fast. Sensors all around the chassis give it some interactivity and prevent it from crushing innocent bystanders when in remote-control mode. Interestingly, its movable arms aren’t attached to the body, but to its extendable side-wings and feature hands with actuated wrists and fingers. The Autobot also can move its head, which pops right out of the hood.

Admittedly, Letrons must have spent a lot of time on the dark side of the moon and working in secrecy before they released footage of a working and polished prototype. It’s unclear if Letron’s Transformers will cooperate with the US military in solving armed conflicts, but they are certainly good for a show. Enjoy the video below!