Hackaday alum [Adam Harris] hacked an FTDI cable to use for programming his Arduino. After cracking open the plastic case he found the FTDI chip used is the same as the one in the SparkFun programmer. The only real difference was that his cable wasn’t resetting the Arduino, he had to do that manually. The solution was to reroute the RTS wire so that it connected up to the DTR pin. This proved difficult because of the tiny footprint of the chip, but after many tries he managed to get a piece of wire wrap soldered in place. 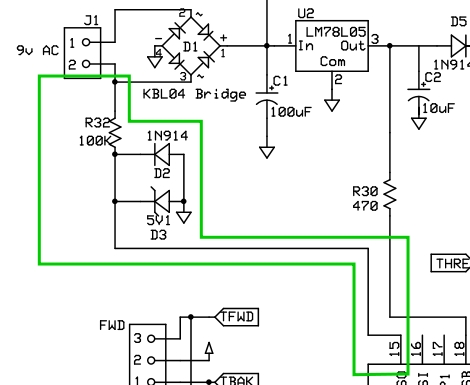 A while back we saw a logic clock that used the alternating current frequency from the power grid to keep time. We asked for information on your projects that use this method and we got a lot of comments and tips. Today we’re sharing [Doug Jackson’s] method which he used in his word clock.

The schematic above is from that project and we’ve outlined the important part in green. [Doug] pulls a signal from the 9V AC power before it hits the bridge rectifier, using a 100K resistor and a zener diode to protect the microcontroller pin. The code for that project comes as a hex file but he sent us the C code pertaining to this timing circuit. It’s written for PIC but you’ll have no trouble adapting it to other microcontroller families. Take a look after the break.

END_OF_DOCUMENT_TOKEN_TO_BE_REPLACED

We’ve seen several different balancing bot styles over the past few years, but this one is new to us. The BallP, short for Ball inverted Pendulum, balances on top of a ball. We’re not sure what the advantages are to this layout though. Anyone care to enlighten us? Even though we hadn’t seen this style, it is apparently not new. The Ballbot has been around for a while and might seem even more impressive visually. [Carmine] let us know about his team’s Automated Football Launcher. Their goal was to combine a football launcher with motion tracking, to allow a player to practice running and catching with the perfect throw. Unfortunately, and we’re not quite sure when, they ended up changing out the Jugs machine for an air cannon, which resulted in the use of foam footballs and the loss of throwing factors such as spiral. Somewhat defeating the purpose but we’ll let it slide; only because we know its going to be shooting potatoes eventually.

The project comes together by using two cameras giving distance and color tracking, combined with a rotating platform (and the best use of garden hose ever), an accurate set-top for their launcher. As seen in the video after the jump, it works out quite nicely. END_OF_DOCUMENT_TOKEN_TO_BE_REPLACED At roughly $20 to build, this 9 digit pulse counter is an excellent example of home built tools. The builder, [Josh] found himself repairing a device and in need of a pulse counter. With the components cheaply available, he just built his own. He says that it has a few limitations, like display brightness, but overall it seems to do the job well. You can download the PCB from his site.