[PJ Allen] has been working on a little robot which he calls Cypherbot. The control circuitry is quite familiar; a Board of Education which features the Basic Stamp 2 microcontroller. This is an older and slower microprocessor, but it works quite well for this application since there’s no need for speed or heavy number crunching. The wheels of the bot are made out of plastic lids (we’re thinking peanut butter jars) with rubber bands for traction that are each driven by a servo motor. The third wheel is tiny and swivels as needed.

The front of the bot has a PING ultrasonic sensor mounted on a servo motor which lets the bot scan back and forth for a wider obstacle avoidance angle. In addition to the autonomous mode there’s an Xbee remote control. [PJ] picked up an Atari keyboard and is using that as the user input. Check out the little guy driving around the house in the video after the break.

END_OF_DOCUMENT_TOKEN_TO_BE_REPLACED The Firebird32 from [Wytec] is build around the 32bit Freescale Flexis MCU [MCF51JM128] running the Coldfire V1 core commonly found in industrial and medical equipment. We were kindly donated a board before release, the first thing that we noticed was  the onboard 8×2 segment LCD which makes the perfect debuging tool. The board along with fitting standard Arduino shields has extra input headers for a keypad, an accelerometer and an extra communication header (IC2/SPI/SCI). It’s also sporting 8 x 12bit analogue inputs, external 32k EEPROM, an RGB LED, a buzzer and an extra push button. The Flexis chip along with the beefy 32bit processor can run at a clock rate up to 48Mhz using PLL and has an integrated USB port, all of this for under $30.

END_OF_DOCUMENT_TOKEN_TO_BE_REPLACED 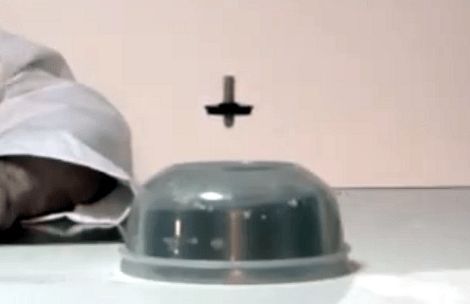 [Andrey Mikhalchuk] built his own magnetic levitation device and you can too… if you have the patience. He’s not using electromagnets, like the Arduino levitator or the floating globe. Instead, a pair of ceramic ring magnets and a few hours are all it takes.

The base of his device is a couple of very large ring magnets that would most often be used in speakers. It’s hard to see them in the image above because there’s an inverted plastic container obscuring them. A second (or third depending on how you’re counting) ring magnet is selected because it is smaller than the circular void in the magnetic base. It’s impossible to simply balance the magnet in the air, but spinning it is a different story. By creating a perfectly balance magnetic top, then spinning it inside the magnetic field of the base, you can leave it floating in mid-air.

Check out the video after the break. It’s a neat effect, but you really do have to have a perfect setup for it to work. [Andrey] mentions that it takes a couple of hours to fine-tune. And if the ambient conditions change slightly, it throws the whole thing off.

END_OF_DOCUMENT_TOKEN_TO_BE_REPLACED When you think about hacking laptops, it’s highly unlikely that you would ever consider the battery as a viable attack vector. Security researcher [Charlie Miller] however, has been hard at work showing just how big a vulnerability they can be.

As we have been discussing recently, the care and feeding of many batteries, big and small, is handled by some sort of microcontroller. [Charlie] found that a 2009 update issued by Apple to fix some lingering MacBook power issues used one of two passwords to write data to the battery controllers. From what he has seen, it seems these same passwords have been used on all batteries manufactured since that time as well. Using this data, he was subsequently able to gain access to the chips, allowing him to remotely brick the batteries, falsify data sent to the OS, and completely replace the stock firmware with that of his own.

He says that it would be possible for an attacker to inject malware into the battery itself, which would covertly re-infect the machine, despite all traditional removal attempts. Of course, replacing the battery would rectify the issue in these situations, but he says that it would likely be the last thing anyone would suspect as the source of infection. While using the battery to proliferate malware or cause irreversible damage to the computer would take quite a bit of work, [Charlie] claims that either scenario is completely plausible.

He plans on presenting his research at this year’s Black Hat security conference in August, but in the meantime he has created a utility that generates a completely random password for your Mac’s battery. He says that he has already contacted Apple to in order to help them construct a permanent fix for the issue, so an official patch may be available in the near future.