Unless you’re a Dragon*Con attendee or an Atlanta native, you’re probably scratching your head at the color choices for the car and for [Krix’s] ludicrous jacket. They’re the hilarious continuation of [Krix’s] costumes from a previous Dragon*Con, which pays tribute to the Atlanta Marriott Marquis’s iconic carpet.

Team [Krix]—which includes [Harrison] and his wife, [Emily], piloted the 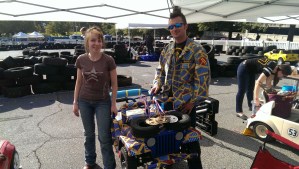 Chariot throughout the weekend. Although tires were blown and transponders were lost, the [Krixes] claimed a number of medals at the Atlanta Mini Maker Faire’s exhibition, winning second place in the first race and first place in both the second race and in the endurance competition. Now, enjoy this brief video of the Chariot’s trial run in its full hotel-camo glory: