The film moves on to describe these mechanisms in the context of fire control systems. It does an excellent job of explaining how several different cams take the rotary input of a ship’s speed and deliver it as linear motion to the follower for output to other systems. Most are aptly named based on the type of output delivered; a reciprocal cam’s output is computed as the reciprocal of the input, and a square cam’s output is the square of the input. 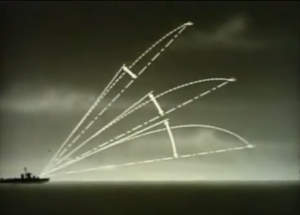 A tangent cam’s input is an angle between 40 and 70, and the output is the tangent of that angle. A time of flight cam takes the range as input and gives the time of flight for projectiles. Perhaps the most complicated, the barrel cam takes the advance range and advance elevation of the target and uses them to compute the superelevation of a projectile. It effectively contains an infinite number of cams that each compute a different superelevation. Differentials are explained quite well through a visual breakdown of the bevel gear variety. In these, the end gear pair provides endless racks to the spider gear’s pinion.

Part two opens with component solvers, which solve vector problems for firing upon stationary targets. These provide continuous solutions by forming vector diagrams based on own ship’s speed and bearing to the target at any given point. The solver calculates the speed vector relative to line of sight with a groove cam, and uses two slotted racks to compute the range rate along the line of sight and the bearing rate perpendicular to the line of sight. 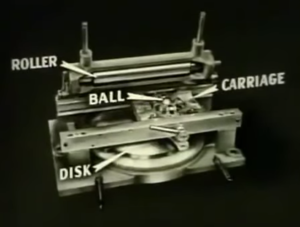 Disc-type integrators are used for range keeping where the present range equals the algebraic sum of the initial range and the range change. The disc integrator continuously computes the range change and outputs it to a differential, which along with the initial range computes the present range. It does this using a time disc and the range rate output sent from the component solver. The mechanism operates like a variable gear with infinite ratios.

Finally, multipliers are used to multiply two continuously changing values, either or both of which may be positive or negative. This device is quite mesmerizing, if we may say so. The rack type described consists of two input racks at right angles to each other, an output rack, and a stationary pin that helps determine the zero point. Both input racks move along the scale and provide the product of the two inputs on the output rack.

Even though these systems were heavy, had a large footprint, and required a lot of power, there is much to be said for their elegance and reliability.

[Thank you to Barron for sending this in]