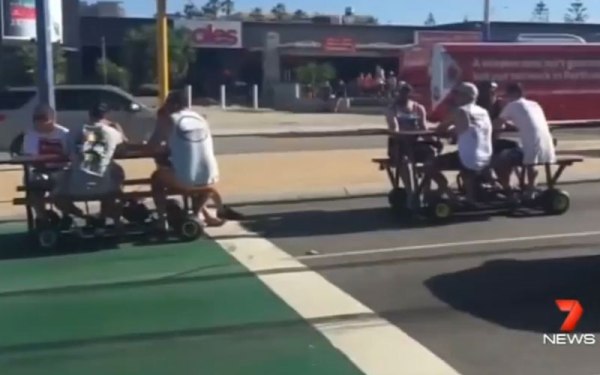 There is a public menace on the streets of Perth, Australia: two motorized picnic tables. Police are looking for the drivers of the, erm, vehicles, which were seen cruising down the West Coast Highway, complete with passenger casually sitting on the tables having a drink. It looks like the two picnic tables are being driven by a centrally mounted lawnmower motor and are controlled from one of the seats. The police are interested because it is illegal to drive something on the public road in Australia that isn’t properly licensed. I’ll bet that his insurance probably doesn’t cover taking it out for a spin on the highway, either. The accompanying TV news report does not identify the person responsible, but they claim have spoken to the builder, who says that the two tables can manage up to 50 miles per hour. They claim that he is even working on an upgraded model that includes a built-in barbecue, which could bring a whole new meaning to the term drive-thru.

END_OF_DOCUMENT_TOKEN_TO_BE_REPLACED

Even in the face of an Internet of Things grasping for a useful use case, an Internet-connected clock is actually a great idea. With a cheap WiFi module and a connection to an NTP server, any clock can become an atomic clock. [Jim] decided to experiment with the ESP8266 to turn a cheap analog clock into something that will display network time using a bunch of gears and motors.

The clock [Jim] chose for this build is an extremely cheap clock pulled right from the shelves of WalMart. This clock uses a standard quartz clock mechanism, powered by a single AA cell. The coils in these quartz movements can be easily controlled by pulsing current through them, and with a few a few transistors and diodes set up in an h-bridge, an ESP8266 is quite good at setting the time on this clock.

The software for this clock first connects to the WiFi network, then checks an NTP server for the true time. Once the ESP8266 gets the time, it starts hammering the coil in the clock movement until the hands are where they should be.

[Jim] says the project needs a bit of work – there is no feedback on the clock to determine the position of the hands. Instead, the time is just set assuming the clock hands started off at 12:00. Still, even with that small fault, it’s a great build and a great exploit of what can be done with a cheap quarts clock movement.

If you’d like to go to the opposite extreme of cost and complexity, how about a DIY retro atomic clock?  Or if you’re in need of a wakeup, we’ve seen a ton of alarm clock posts in the past few weeks. 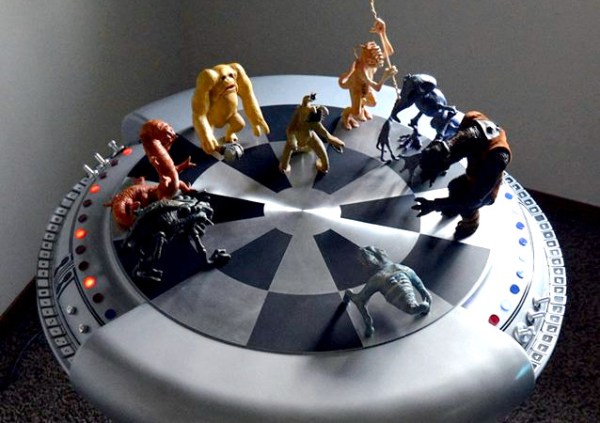 The quality and attention to detail seen in [Ian Martin]’s build is impressive regardless of his choice to build a functioning holochess set. We’re not to take away from the nerd-gasm this build invokes, but we’d rather draw to attention the craftsmanship of the builder. Sadly [Ian] doesn’t have a proper blog or product page but you can view everything he posts about the project on his social networking page and get his take on the finished work in the video below.

This build is not just a well engineered mechanical design, the electronics that run the controls and indicators are [Ian]’s home brew Arduino Mega shields. A complete game requires two sets of electronics, one for each side of the table so rolling his own shield was probably a space saving decision.

Each of the figures used as game pieces were hand sculpted and painted (is that a Rancor to the right?). User controls are presented in true-to-form fashion with 54 buttons, 26 lights, 10 knobs, and an LCD screen with custom bezel to display custom monster status. Nope, the monsters aren’t animated holograms but to make up for that [Ian] built in ambient noises so you know which are still alive. This is our first time discovering that there is a name other than “Holochess” for the game: Dejarik. We’ll leave it up to the reader to figure out how it’s played.

This is an impressive build and we can’t wait to see what else [Ian] comes up with in the future. We have covered Star Wars builds before and some interesting board game builds but never where the two meet before this.