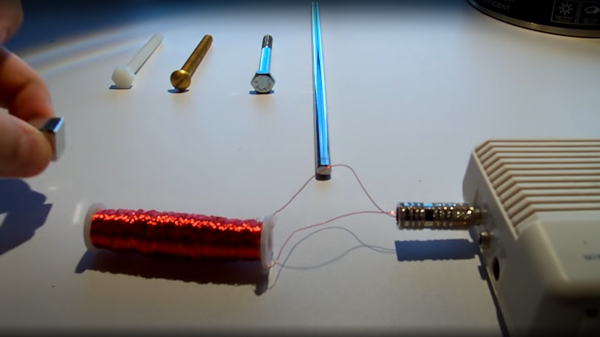 The Barkhausen effect — named after German Physicist Heinrich Barkhausen — is the term given to the noise output produced by a ferromagnetic material due to the change in size and orientation of its discrete magnetic domains under the influence of an external magnetic field. The domains are small: smaller than the microcrystalline grains that form the magnetic material, but larger than the atomic scale. Barkausen discovered that as a magnetic field was brought close to a ferrous material, the local magnetic field would flip around randomly, as the magnetic domains rearranged themselves into a minimum energy configuration and that this magnetic field noise could be sensed with an appropriately arranged pickup coil and an amplifier. In the short demonstration video below, this Barkhausen noise can be fed into an audio amplifier, producing a very illustrative example of the effect.

One example of practical use for this effect is with non-destructive testing and qualification of magnetic structures which may be subject to damage in use, such as in the nuclear industry. Crystalline discontinuities or impurities within a part under examination result in increased localized mechanical stresses, which could result in unexpected failure. The Barkhausen noise effect can be easily leveraged to detect such discontinuities and give the evaluator a sense of the condition of the part in question. All in all, a useful technique to know about!

If you were thinking that the Barkhausen is a familiar name, you may well be thinking about the Barkhausen stability criterion, which is fundamental to describing some of the conditions necessary for a linear feedback circuit to oscillate. We’ve covered such circuits before, such as this dive into bridge oscillators.

END_OF_DOCUMENT_TOKEN_TO_BE_REPLACED 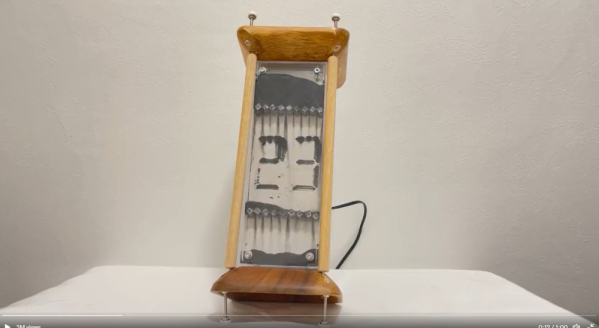 If someone asked you to build a digital hourglass, what would your design look like? [BitBlt_Korry] took on that challenge, creating a functional art piece that hits it right on the nose: an hourglass with a digital display.

Iron filings fall between two pieces of plexiglass while ghostly numbers appear, counting down 30 seconds. Just as quickly as they appear, the numbers disappear – dropping down to the bottom of the enclosure. Each second is punctuated by what might be the loudest clock tick we’ve ever heard. 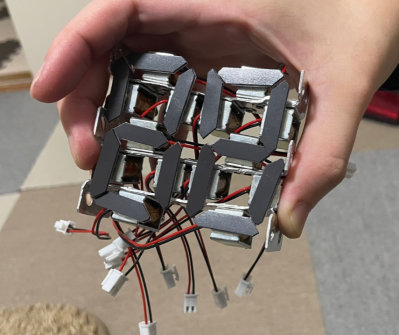 Of course, it’s not all magic. The hourglass is controlled by a Raspberry Pi Pico running code in MicroPython. The pico drives a series of transistors, which in turn are used to control 14 solenoids.  The solenoids serve double duty — first, they move pieces of flat “fridge magnet” material close enough to attract iron filings. Their second duty is of course provide a clock tick that will definitely get your attention.

Tilt sensors are the user input to the hourglass, letting the Pi Pico know which end is up when it’s time to start a new 30-second countdown.

[BitBlt_Korry] mentions that the hardest part of the project was setting the screws at the top and bottom of the hourglass to get the perfect uniform flow of iron filings.

[BitBlt_Korry] calls his creation “「時場(じば)」”.  Google translates this to “Jiba”, which means “magnetic field”.  We’re not native speakers, but we’re guessing there is a double meaning there.

This isn’t the first time we’ve seen humble iron filings stand up and dance at our command. If iron dust is too dry a topic, we’ve got plenty of ferrofluid projects as well!

END_OF_DOCUMENT_TOKEN_TO_BE_REPLACED 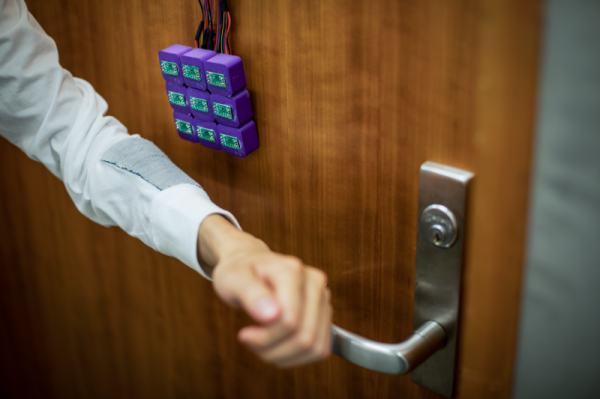 END_OF_DOCUMENT_TOKEN_TO_BE_REPLACED

When you think of South Dakota you generally think of Mount Rushmore and, maybe, nuclear missiles. However, [Simeon Gilbert] will make you think of semiconductors. [Simeon], a student at South Dakota State University, won first place at the annual Sigma Xi national conference because of his work on a novel magnetic semiconductor.

The material, developed in collaboration with researchers from the nano-magnetic group at the University of Nebraska-Lincoln, is a mix of cobalt, iron, chromium, and aluminum. However, some of the aluminum is replaced with silicon. Before the replacement, the material maintained its magnetic properties at temperatures up to 450F. With the silicon standing in for some of the aluminum atoms, the working temperature is nearly 1,000F.

END_OF_DOCUMENT_TOKEN_TO_BE_REPLACED 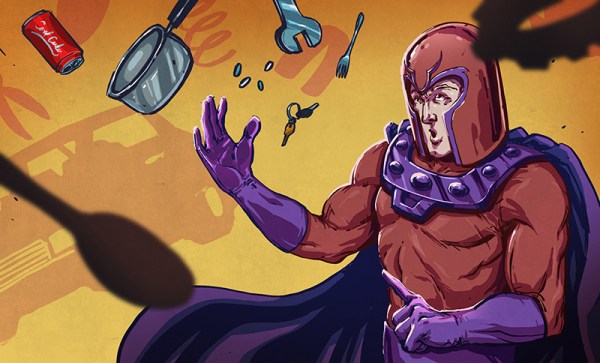 I consider myself a fairly sharp guy. I’ve made a living off of being a scientist for over 20 years now, and I have at least a passing knowledge of most scientific fields outside my area. But I feel like I should be able to do something other than babble incoherently when asked about magnets. They baffle me – there, I said it. So what do I do about it? Write a Hackaday post, naturally – chances are I’m not the only one with cryptomagnetonescience, even if I just made that term up. Maybe if we walk through the basics together, it’ll do us both some good understanding this fundamental and mysterious force of nature.