You may not remember this, but Nintendo hardware used to be a pretty big deal. The original Game Boy and NES both had remarkable industrial design that, like the Apple II and IBM Thinkpad, weren’t quite appreciated until many years after production ended. But, like many of you, [daftmike] had nostalgia-fueled memories of the NES experience still safely locked away. 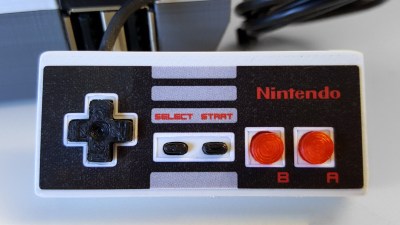 Now, like any respectable hacker, [daftmike] didn’t let gaps in his knowledge stop him. This project was a learning experience. He had to teach himself a lot about 3D design and modeling, using Linux, and programming. But, the end result was surely worth the work; the attention to detail shows in features like the USB placement, the power and reset buttons, and of course the game cartridges which work with the magic of NFC and still include the insert and toggle action of the original cartridge carriage.