I’ll admit it. I can be a little cheap. I also find it hard to pass up a bargain. So when I saw a robot kit at the local store that had been originally $125 marked down to $20, I had to bite. There was only one problem. After I got the thing home, I found they expected you to supply your own radio control transmitter and receiver.

Normally, that wouldn’t be a problem but lately… let’s just say a lot of my stuff is in storage and I didn’t have anything handy. I certainly didn’t want to go buy something that would double the cost of this robot that I really didn’t need to begin with.

However, I did have a few ESP8266 modules handy. Good ones, too, from Adafruit with selected 5 V I/O compatibility and an onboard regulator. I started thinking about writing something for the ESP8266 to pick up data from, say, a UDP packet and converting it into RC servo commands.

Seemed like a fair amount of work and then I remembered that I wanted to try Blynk. If you haven’t heard of Blynk, it is a user interface for Android and Apple phones that can send commands to an embedded system over the Internet. You usually think of using Blynk with an Arduino, but you can also program the embedded part directly on an ESP8266. I quickly threw together a little prototype joystick.

In this and a subsequent post, I’m going to tell you more about how all this went together and what I learned about the strengths and weaknesses of using Blynk on the ESP8266. There’s nothing specific about the code to the particular robot. The finished project looks like a standard two-channel RC controller sending pulses from 1 to 2 ms in length to indicate the joystick position on each axis.

There’s not much to the joystick in theory. Forget the phone application and the networking for a minute. If you had two sensors (like, say, potentiometers), the output for the joystick is just a pair of pulses, one for each axis. These pulses typically drive servos. A 1.5 ms pulse means the sensor for that axis is at the center. A 2 ms pulse means it is at one extreme and a 1 ms pulse means it is at the other extreme. Everything else is to scale. So if the X pulse is at 1.2 ms and the Y pulse is at 1.9 ms, then the X axis is a little off center one way, and the Y axis is a lot off center the other way.

In this case, our sensors are the joystick widget on the phone screen. That’s the hard part, but thanks to Blynk, it really isn’t that hard at all.

The GUI part of Blynk is really simple. You build a screen, add widgets and tap them to configure them. The joystick has some basic configuration items (see figure, below) and you can set its range (which we’ll set to 1000 to 2000 to match the pulse with in microseconds).

When you create a Blynk app, you generate a long hex number that identifies your application. That number is the key to connecting your microcontroller to the user interface.

The basic steps are easy: 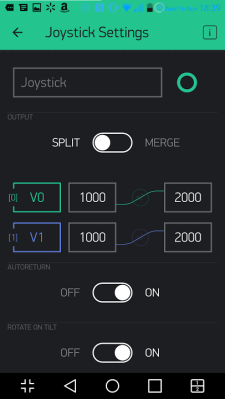 At the top of the screen you’ll see a + sign. You can use that to add various widgets (switches, LEDs, and–of course–the joystick control). You can build your interface and set different properties on each widget that controls its appearance and behavior.

To get it all to work, you load the Blynk embedded-side code into your processor. You’ll also have to add the  ID number and do whatever it takes to get network connectivity (e.g., add your network SSID and password). For a lot of things, that’s all you have to do.

When your program runs, it connects to the Blynk server and since it has that ID, it will connect to the phone GUI (assuming it is open). For simple things, you don’t need anything else. You can connect buttons and LEDs and sliders and similar items from the Blynk widget set directly to physical pins on your device. Connect a button to a pin connected to a physical LED and you can turn the LED on and off. Connect an LED to a input switch on the microcontroller and you can light the virtual LED by pushing the button.

Things like sliders and gauges can use analog output (PWM) and analog inputs. So “pin” doesn’t necessarily mean a single digital bit.

Sometimes connecting widgets to physical I/O is all you need. Some widgets can do things like scale numbers (so 0-255 turns into 0-100, for example) that reduces the need to do anything custom. However, sometimes you need custom code. For these cases, you can use virtual pins that I will describe later.

The app, by the way, is free… sort of. You are given a certain amount of “energy” to spend. When you use a widget, it consumes a certain amount of energy. If you delete a widget, you get the energy back. If you are out of energy, you can’t add any more widgets. Unless, that is, you buy more energy. I know the Internet has conditioned us to think everything should be free, but this is a fair compromise. The joystick left me with no energy, so it didn’t cost me anything to deploy, but unless I delete it, I can’t make anymore Blynk interfaces without paying for more energy.

To complete the joystick project, you’ll need to tackle the following issues:

Neither of these are especially hard, as I’ll show you next time. For the joystick, there’s no need to send data from the ESP8266 back to the phone, although that’s certainly possible.

We’ve covered Blynk before, but I wanted to do a complete project just for Hackaday (not that we haven’t seen plenty of projects out there). If you want to follow along, grab an ESP8266, download Blynk, and stay tuned for the next installment.