If you are a Linux user that has to use Windows — or even a Windows user that needs some Linux support — Cygwin has long been a great tool for getting things done. It provides a nearly complete Linux toolset. It also provides almost the entire Linux API, so that anything it doesn’t supply can probably be built from source. You can even write code on Windows, compile and test it and (usually) port it over to Linux painlessly.

However, Cygwin’s package management is a little clunky and setting up the GUI environment has always been tricky, especially for new users. A project called Swan aims to make a full-featured X11 Linux environment easy to install on Windows.

The project uses Cygwin along with Xfce for its desktop. Cygwin provides pretty good Windows integration, but Swan also includes extra features. For example, you can make your default browser the Windows browser with a single click. It also includes spm — a package manager for Cygwin that is somewhat easier to use, although it still launches the default package manager to do the work (this isn’t a new idea, by the way).

END_OF_DOCUMENT_TOKEN_TO_BE_REPLACED 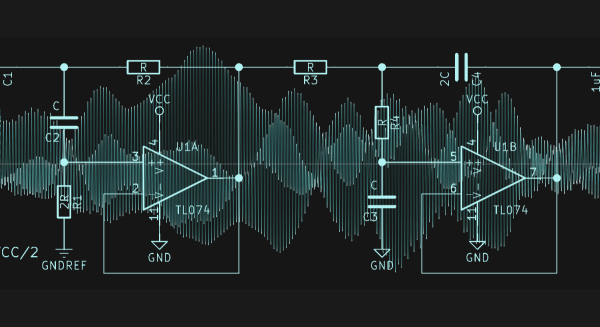 In the last edition of Don’t Fear the Filter, we built up two examples of the simplest and most-used active filter of all time: the two-pole Sallen-Key lowpass. This time, we’re going to put two of these basic filter blocks in a row, and end up with a much sharper lowpass filter as well as a bandpass filter. For the bandpass, we’ll need to build up a quick highpass filter as well. Bonus!

I claimed last time that the Sallen-Key lowpass would cover something like 80% of your filtering needs. (And 72.4% of all statistics are totally made up!) These two will probably get you through another 10% or so. Honestly, I’ve never built a standalone active highpass, for reasons we’ll see below, but the active bandpass filter that we’re building it for is a great tool to have in your belt, especially for anything audio.

END_OF_DOCUMENT_TOKEN_TO_BE_REPLACED

Back the late 2000s, when netbooks were the latest craze, some models would come with an inbuilt 3G modem for Internet access. At the time, proper mobile Internet was a hip cool thing too — miles ahead of the false prophet known as WAP. These modems would often slot into a Mini PCI-e slot in the netbook motherboard. [delokaver] figured out how to use these 3G cards over USB instead.

It’s actually a fairly straightforward hack. The Mini PCI-e standard has a couple of pins dedicated to USB data lines, which the modem in question uses for communicating with the host computer. Unfortunately it’s not quite as simple as just soldering on a four-wire USB cable. The modem relies on the 3.3V power from the Mini PCI-e slot instead of the 5V from USB. No problem, just get a low-dropout 3.3V regulator and run that off the USB port. Then, it’s a simple enough matter of figuring out which pins are used to talk to the SIM card, and soldering them up to a SIM adapter, or directly to the card itself if you’re so inclined. The guide covers a single model of 3G modem but it’s likely the vast majority of these use a very similar setup, so don’t be afraid to have a go yourself.

Overall Mini PCI-e is a fairly unloved interface, but we’ve seen the reverse of this hack before, a Mini PCI-e to USB adapter used to add a 12-axis sensor to a laptop.

Ever since the Raspberry Pi was released to an eager public just over five years ago there is one project that seems to have been tackled more frequently than any other using the small computer from Cambridge: that of making a laptop with Pi for brains. Perhaps you feel you have had your fill of Pi laptops both good and bad, but it’s still a project that can bring up some surprises.

[Archie Roques] is a young maker from Norwich, UK, and at the Raspberry Pi birthday party in early March he had rather an unusual laptop. He’d done the usual thing of mating the official Pi screen, a bluetooth keyboard/touchpad, Pi, and battery, but as always it’s the detail that matters. His case is a carefully designed sandwich of laser-cut plastic that somehow manages the impossible task of containing all the laptop internals while not being too bulky.

For power he at first used a 4 AH LiPo cell from a dead tablet with a Pimoroni LiPo power board, but since he hit problems with the Pimoroni board supplying both screen and Pi he’s switched to an off-the-shelf power bank. Unusually this laptop also has built-in audio, using another Pimoroni product, their speaker pHAT.

Where this laptop has a flaw though is in the display hinges. He has plans for a beautifully made 3D printed hinge, but for now he’s using a piece of tape, which though functional does not add to the aesthetic. When we saw it in Cambridge the keyboard was fitting more snugly than it does in the photos on his write-up, so perhaps he’s fixed some of its issues. Despite the in-progress hinge it’s a very usable little Pi laptop, and though (Hint, [Archie]!) he hasn’t yet published the design files for it, we’re sure when he does we’ll see other people building the same machine. They won’t be quite as exclusive as [Archie]’s model though, while he was in Cambridge he managed to get it signed by [Eben Upton], founder of the Raspberry Pi Foundation and judge for the 2017 Hackaday Prize.

We recently showed you a Pi laptop build in a cigar box that was useful in its detailing of the various modules required, but in the past we’ve shown you another one using the official touch screen, a lovely one in the style of a Psion palmtop, and vertically bulky yet small-footprint one, and another that keeps its presence hidden.

A tip of the hat to Norwich Hackspace.