Talk about playing on hard mode! The news this week was rife with stories about Palmer Luckey’s murder-modified VR headset, which ostensibly kills the wearer if their character dies in-game. The headset appears to have three shaped charges in the visor pointing right at the wearer’s frontal lobe, and would certainly do a dandy job of executing someone. In a blog post that we suspect was written with tongue planted firmly in cheek, Luckey, the co-founder of Oculus, describes that the interface from the helmet to the game is via optical sensors that watch the proceeding on the screen, and fire when a certain frequency of flashing red light is detected. He’s also talking about ways to prevent the removal of the headset once donned, in case someone wants to tickle the dragon’s tail and try to quickly rip off the headset as in-game death approaches. We’re pretty sure this isn’t serious, as Luckey himself suggested that it was more of an office art thing, but you never know what extremes a “three commas” net worth can push someone to.

There’s light at the end of the Raspberry Pi supply chain tunnel, as CEO Eben Upton announced that he foresees the Pi problems resolving completely by this time next year. Upton explains his position in the video embedded in the linked article, which is basically that the lingering effects of the pandemic should resolve themselves over the next few months, leading to normalization of inventory across all Pi models. That obviously has to be viewed with some skepticism; after all, nobody saw the supply chain issues coming in the first place, and there certainly could be another black swan event waiting for us that might cause a repeat performance. But it’s good to hear his optimism, as well as his vision for the future now that we’re at the ten-year anniversary of the first Pi’s release.

END_OF_DOCUMENT_TOKEN_TO_BE_REPLACED

It’s hard to believe it, but the Raspberry Pi has been on the market for only seven years now. The single-board computer has become so entrenched in the hobby electronics scene that it’s hard to imagine life without it, or what we did before it came along. And with the recent announcement that the 30 millionth Raspberry Pi was recently manufactured, now we have some clarity on the scale of its success. Just roll that number around in your head for a bit – that’s one Pi for every nine or so people in the USA. Some of the other facts and figures in the linked article boggle the mind too, like Eben Upton figured they’d only ever sell about 10,000 units, or that the factory in Wales where most Pis are made can assemble 15,000 units a day.

Speaking of manufacturing, have you ever considered what goes into getting a small-scale manufactured product ready for shipping? The good folks over at Gigatron know all about the joys of kitting, and have put together an interesting un-unboxing video for their flagship TTL-only retro computer. It’s a nice riff on the unboxing videos that are somehow popular on YouTube these days, and shows just how much effort they put into getting a Gigatron out the door. All told, it takes about an hour to ship each unit, and the care put into the process is evident. We especially like the part where all the chips are placed into antistatic foam in the same orientation they’ll be on the completed board. Nice touch.

Last time we checked in on the Lulzbot saga, the open source 3D printer manufacturer had been saved from complete liquidation by a company named FAME 3D. Now we’re getting the first solid details about where things go from here. Not only will thirteen of the remaining Lulzbot employees be staying on, but FAME 3D plans to hire 50 new employees to get operations back up as quickly as possible. The catch? The “F” in FAME 3D stands for Fargo, North Dakota, where Fargo Additive Manufacturing Equipment 3D is based. So Lulzbot will be moving north from Loveland, Colorado in the coming months.

For the last few years, adventure travelers making the pilgrimage to Shenzhen to scour the electronics markets have stuffed a copy of Andrew “Bunnie” Huang’s The Essential Guide to Electronics in Shenzhen into their soon-to-be-overflowing backpacks. The book is a goldmine of insider information, stuffed with maps and translation tables critical for navigating a different culture with no local language skills. Bunnie’s book has only been available in dead-tree format and now that all but the last few copies have been sold, he decided to make a web version available for free. We’d have to think a tablet or phone would be a bit harder to use in the heat of negotiation than the nice spiral-bound design of the print copy, but the fact that the insider information will now be widely available probably makes this a net positive.

And finally, if you’ve ever nearly been run over by an EV or hybrid silently backing out of a parking space, you’ll no doubt appreciate attempts to legislate some sort of audible presence to these vehicles. But what exactly should an electric vehicle be made to sound like? Volkswagen has begun to address that question, and while you can certainly read through the fluff in their press release, all you really need to do is listen to the sample. We’ve got to say that they pretty much nailed what a car of the future should sound like. Although they might have missed a real opportunity here. 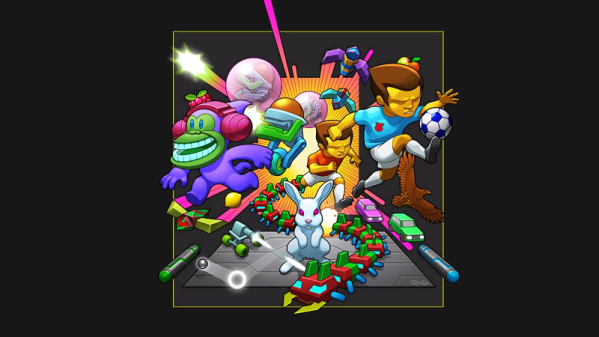 END_OF_DOCUMENT_TOKEN_TO_BE_REPLACED

Ever since the Raspberry Pi was released to an eager public just over five years ago there is one project that seems to have been tackled more frequently than any other using the small computer from Cambridge: that of making a laptop with Pi for brains. Perhaps you feel you have had your fill of Pi laptops both good and bad, but it’s still a project that can bring up some surprises.

[Archie Roques] is a young maker from Norwich, UK, and at the Raspberry Pi birthday party in early March he had rather an unusual laptop. He’d done the usual thing of mating the official Pi screen, a bluetooth keyboard/touchpad, Pi, and battery, but as always it’s the detail that matters. His case is a carefully designed sandwich of laser-cut plastic that somehow manages the impossible task of containing all the laptop internals while not being too bulky.

For power he at first used a 4 AH LiPo cell from a dead tablet with a Pimoroni LiPo power board, but since he hit problems with the Pimoroni board supplying both screen and Pi he’s switched to an off-the-shelf power bank. Unusually this laptop also has built-in audio, using another Pimoroni product, their speaker pHAT.

Where this laptop has a flaw though is in the display hinges. He has plans for a beautifully made 3D printed hinge, but for now he’s using a piece of tape, which though functional does not add to the aesthetic. When we saw it in Cambridge the keyboard was fitting more snugly than it does in the photos on his write-up, so perhaps he’s fixed some of its issues. Despite the in-progress hinge it’s a very usable little Pi laptop, and though (Hint, [Archie]!) he hasn’t yet published the design files for it, we’re sure when he does we’ll see other people building the same machine. They won’t be quite as exclusive as [Archie]’s model though, while he was in Cambridge he managed to get it signed by [Eben Upton], founder of the Raspberry Pi Foundation and judge for the 2017 Hackaday Prize.

We recently showed you a Pi laptop build in a cigar box that was useful in its detailing of the various modules required, but in the past we’ve shown you another one using the official touch screen, a lovely one in the style of a Psion palmtop, and vertically bulky yet small-footprint one, and another that keeps its presence hidden.

A tip of the hat to Norwich Hackspace.