At the start of the war, aerial combat involved pilots firing bullets at each other using handheld pistols or rifles and even throwing out rope to tangle the enemy’s propeller. The pistols were inaccurate and the rifles had a small chance of hitting a critical component. With the pilot both trying to fly the plane and fire a weapon at the same time, none of this was very effective.

It was when machine guns came into use in the latter part of 1914 that aerial combat really began. Some larger aircraft did carry dedicated gunners, such as the German AEG G.IV bomber pictured here but dedicated fighter craft carried just the pilot.

You may ask, why not mount forward-facing machine guns onto the wings? During World War I wings were braced using cables and didn’t provide as rigid a mounting position as the fuselage, resulting in vibrations which reduced accuracy. Also, with the guns so far away, the pilot couldn’t clear jams or reload. Though with later multi-crewed bombers, mechanics did often venture out onto the wings to perform maintenance.

Firing Over The Propeller 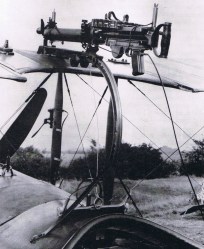 For biplanes, the upper wing offered a location to mount a forward facing machine gun which would fire above the propeller. Being on the wing instead of the fuselage, it did lose accuracy due to vibration. But it allowed the pilot to both steer the plane and fire the gun at the same time. The British Foster mounting shown here was one such example.

The machine gun was mounted on a curved rail so that it could be pulled down by the pilot for clearing any jams and reloading. It could then be raised back up through a combination of springs and bungee cords.

Pilots found that they could also fire with the gun partway along the rail, such that it was pointing upward. This allowed them to shoot at the enemy from below and to the rear.

Deflecting Bullets Fired at the Propeller

The most effective and preferred single-pilot fighter aircraft machine gun mounting was in front of the pilot on the fuselage where vibration was at a minimum. The pilot could steer the plane and aim the gun by the same action and could clear jams and reload. However, there was the small issue of having a propeller in the way. It would not do to cut away the ends of the wooden blades in mid-flight. Surprisingly, the first solution wasn’t really a solution at all but more of a hacked-together workaround.

One way to at least minimize propeller damage was to mount a steel wedge to the backside of the blades in line with where the bullets flew. Any bullets which hit it were deflected to one side. Shown here is a propeller with the wedges mounted at the correct radial distance from the center and with tiebars for bracing. This one was used by Roland Garros in April 1915 as a backup for the synchronization approach I talk more about below. While he scored several kills, he was forced to land due to engine failure, possibly caused by strain on the engine’s crankshaft by the bullets striking the deflectors.

But besides putting a strain on the engine, deflectors caused another problem. The propeller blades were typically made of laminated wood and the impacts, despite being deflected away by the steel deflectors, would cause the glue to weaken and the layers to separate. It was therefore preferable to avoid hitting the propeller.

Firing Through The Propeller: The Engine Literally Pulls the Trigger

Syncronization was the answer to avoid having bullets hit the propeller. One of the earliest mechanisms devised was the Fokker Stangensteuerung gear. It used a cam on the propeller shaft to push on a rod which pushed the gun’s trigger.

The cam was aligned to only fire when the path for the bullet was clear. Of course the gun shouldn’t fire every time the engine is turning, so there was a trigger lever which the pilot had to press to as a final part of the firing mechanism. The video below of a museum exhibit shows the mechanism in action but there are some subtleties which the following diagrams make clear. 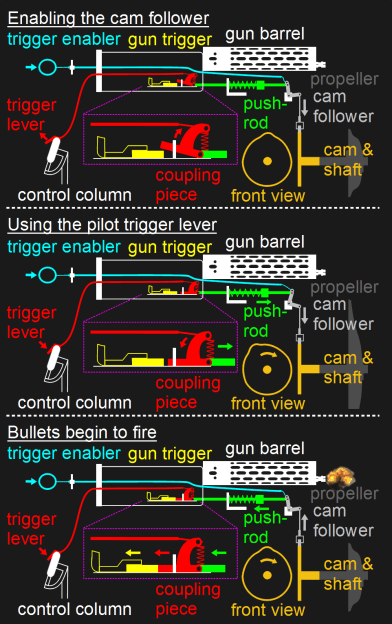 The following video shows the synchronization gear of a German single-seat Fokker E-type monoplane. This is from an exhibit once on display in the Canada Aviation and Space Museum and simulates all the above actions as well as showing how things are restored to a non-combat stance after a battle.

There were some difficulties with the synchronizers, as you’d expect of any mechanical system functioning at such a high rate of oscillation.

Temperature changes in the metal rods caused thermal expansion which resulted in their changing length. With such tight timing requirements, this would fire the bullet either sooner or later enough to hit a propeller blade.

Propeller speeds also varied during the flight. While you might think that it wouldn’t matter since the cam rotated at the same speed as the propeller, the firing of the gun took a length of time which was independent of the propeller speed. Even the distance the bullet had to travel was an issue with low muzzle-velocity guns and when the travel distance was sufficiently large. With some systems, the pilot had to keep an eye on the tachometer indicating the engine speed to know when it was safe to fire.

If all the above could be solved, many attempts to build synchronizers still failed due to the unreliable timing of many makes of gun. Even inaccuracies in bullet manufacturer meant that some bullets would fire at the wrong time, hitting a propeller blade.

Many synchronizer designs were developed during the war, some which introduced improvements. The German Fokker Zentralsteuerung gear did away with the cam and pushrods and instead connected a flexible drive shaft to the engine’s camshaft. This carried the rotation up to the gun itself.

Timing adjustments could now be done at the gun instead of at a single cam on a propeller shaft. This was especially useful when multiple guns were used in order to maximize the chances of hitting a critical part of the enemy plane. A separate flexible drive shaft was run up to each gun. Since each gun had slightly different timing, this meant that each could be adjusted individually. Also, should one gun fail, the others would still work.

Yet other means of synchronizing with the propeller position were electrical, using contacts around the propeller shaft to activate a solenoid at the gun trigger, and hydraulic. A modern implementation by a hacker would of course use a microcontroller and an airsoft gun.

The End Of Synchronizers

A number of things brought about the end of synchronizers. One was that the increased speed of aircraft made them harder to shoot down at the synchronizer’s firing rate. More powerful bombers used heavier armor for vital areas which rifle-caliber machine guns were unable to penetrate. The switch from cable-braced wings to the more rigid cantilever wings meant that guns could be mounted on the wings instead. And of course, the eventual introduction of jet engines meant there were no more propellers to fire through. The final synchronized guns were used during the Korean war in the early 1950s.

39 thoughts on “Firing Bullets Through Propellers”