Perched atop a dormant volcano far above the roiling tropical air of the Big Island of Hawai’i sit two of the largest optical telescopes in the world. Each 10-meter main mirror is but a single part of a magnificent machine weighing in at some 400 tons that needs to be positioned with incredible precision. Keeping Keck 1 and Keck 2 in peak operating condition is the job of a team of engineers and scientists, so when the servo amplifiers running the twelve motors that move each scope started to show their age, [Andrew] bit the bullet and rebuilt the obsolete boards from scratch. 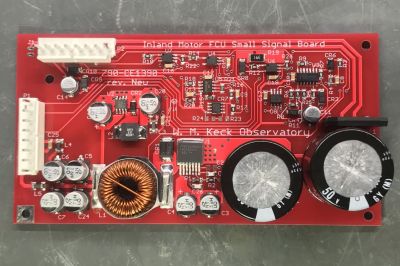 The Keck telescopes were built over three decades ago, and many of the parts, including the problematic servo amps, are no longer made. Accumulated wear and tear from constant use and repeated repairs had taken their toll on the boards, from overheated components to lifted solder pads. With only some barely legible schematics of the original amplifiers to go by, [Andrew] reverse engineered new amps. Some substitutions for obsolete components were needed, the PCB design was updated to support SMD parts, and higher-quality components were specified, but the end result is essentially new amplifiers that are plug-in replacements for the original units. This should keep the telescopes on track for decades to come.

Not to sound jealous, but it seems like [Andrew] has a great gig. He’s shared a couple of his Keck adventures before, like the time a failed LED blinded the telescope. He’s also had a few more down-to-earth hacks, like fixing a dodgy LCD monitor and making spooky blinkeneyes for Halloween.