While we love speculative thinking, this seems like a lot to swallow. Sure, sure, the future could see very high-speed motors and very lightweight vehicles. But it is hard to imagine the Aero spinning fast enough to generate enough lift to loft a person alone. There’s also the inherent safety issues. If you want to see a more plausible flying car, check out the Bell Nexus. below. See the size of those props? Goodyear also says the tires would contain fiber optic sensors to monitor the road and the tire along with an embedded AI processor because — after all — what doesn’t need that? 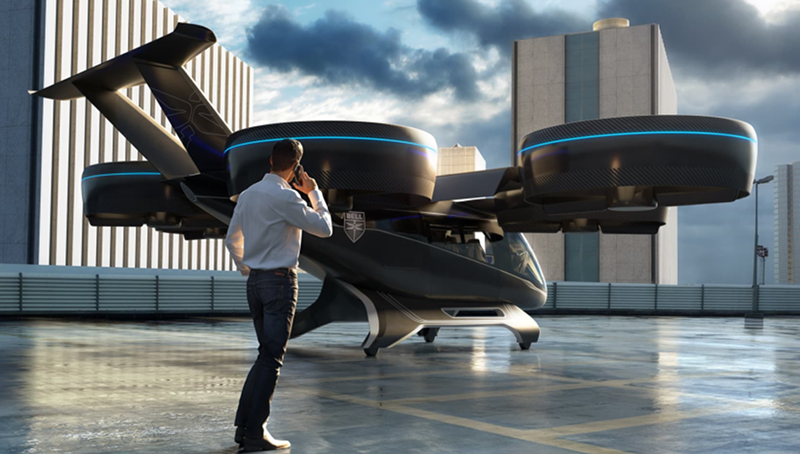 This is an interesting problem in engineering ethics and reminded us of a lot of various nefarious Kickstarter campaigns. With computer methods, you can mock up all sorts of impossible gadgets. Would you like a cell phone that needs charging once a month for ten minutes? So would we! We just don’t know how to make one. How about a jetpack? Why not? Granted, Goodyear isn’t seeking funding for this tire, so it isn’t quite so bad, but it doesn’t look any more practical than Hackaday announcing our new once-a-month cell phone charger available sometime in the future.

In all fairness, we aren’t exactly a bunch of flying car designers, so maybe there’s something going on here that we don’t understand. We get, too, that this is supposed to be forward-looking and not something to build today. But short of the video’s vehicles having an antigravity device, we don’t think this looks like anything we are going to see in our lifetime. Flying cars, maybe. But not with tiny propeller wheels.

It isn’t just Goodyear. Every six months or so we see a newspaper article about how scientists are about to invent the transporter because quantum teleportation isn’t well understood. We see stories all the time about the next big battery technology that never seems to actually hit the market.

Arthur C. Clarke famously said, “Any sufficiently advanced technology is indistinguishable from magic.” While I think he meant that in terms of cultures colliding, we may be at a time when most people don’t understand our own technology. That may seem hard to believe if you mostly hang out at hacker spaces and surplus electronic stores. But try asking the average person how a cell phone works. Or a microwave oven.

Maybe it is time to start teaching kids a “technology” class to try to develop common sense about how tech works at a high-level. Some of these kids will become business executives, judges, and lawmakers and we’ve all seen what happens when people in those roles don’t understand the technology about which they are making decisions.

This isn’t the first time we’ve railed against flying car concepts. Like videotape, the flying car is one of those things that makes a lot of false starts into the consumer market. Videotape finally hit, but it is taking a lot longer to get the car — um — off the ground.

70 thoughts on “Goodyear Aero Thinks Flying Cars Are A Thing”