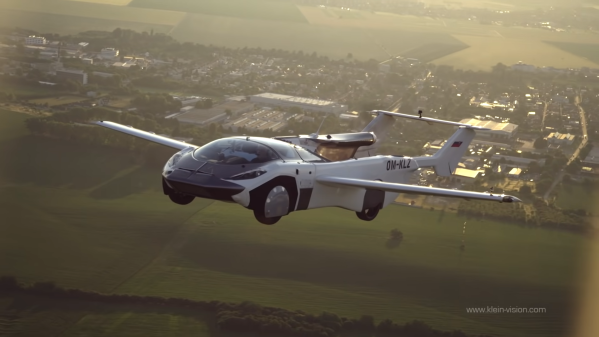 For almost as long as there have been cars and planes, people have speculated that one day we will all get around in flying cars. They’d allow us to “avoid the traffic” by flying through the air instead of sitting in snarling traffic jams on the ground.

The Klein Vision AirCar hopes to be just such a panacea to our modern traffic woes, serving as a transformable flying car that can both soar through the air and drive on the ground. Let’s take a look at the prototype vehicle’s achievements, and the inherent problems with the underlying flying car concept.

It Flies and Drives

The AirCar is a somewhat futuristic looking, yet simultaneously dated, vehicle. It’s a two-seater with a big bubble canopy for the driver and a single passenger. At the rear, there’s a propeller and twin-boom tail, while the folding wings tuck along either side of the vehicle in “car” mode. At the flick of a switch, the wings fold out and lock in place, while the tail extends further out to the rear. The conversion from driving mode to flight mode takes on the order of a few minutes. The powerplant at the heart of the vehicle is a 160-horsepower BMW engine which switches between driving the wheels and the propeller as needed.

Unlike some concepts we’ve explored in the past, the AirCar has successfully demonstrated itself as a working flying car without incident. Additionally, it did so as a single vehicular package, without removable wings or other such contrivances. On June 28th, 2021, it successfully flew from an airport in Nitra, Slovakia, down to the neighbouring city of Bratislava in 35 minutes – roughly half the time it takes by car. Company founder Stefan Klein was behind the controls, casually driving the vehicle downtown after the successful landing. END_OF_DOCUMENT_TOKEN_TO_BE_REPLACED 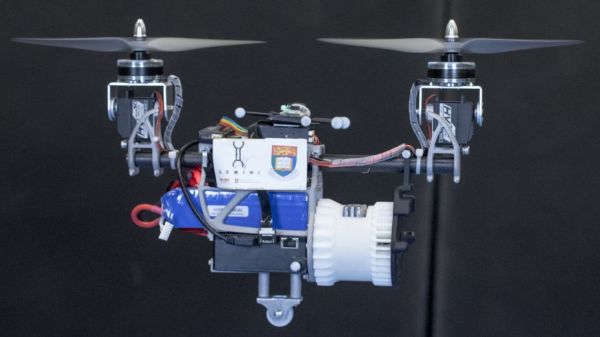 Multirotor aircraft enjoy many intrinsic advantages, but as machines that fight gravity with brute force, energy efficiency is not considered among them. In the interest of stretching range, several air-ground hybrid designs have been explored. Flying cars, basically, to run on the ground when it isn’t strictly necessary to be airborne. But they all share the same challenge: components that make a car work well on the ground are range-sapping dead weight while in the air. [Youming Qin et al.] explored cutting that dead weight as much as possible and came up with Hybrid Aerial-Ground Locomotion with a Single Passive Wheel.

As the paper’s title made clear, they went full minimalist with this design. Gone are the driveshaft, brakes, steering, even other wheels. All that remained is a single unpowered wheel bolted to the bottom of their dual-rotor flying machine. Minimizing the impact on flight characteristics is great, but how would that work on the ground? As a tradeoff, these rotors have to keep spinning even while in “ground mode”. They are responsible for keeping the machine upright, and they also have to handle tasks like steering. These and other control algorithm problems had to be sorted out before evaluating whether such a compromised ground vehicle is worth the trouble.

Happily, the result is a resounding “yes”. Even though the rotors have to continue running to do different jobs while on the ground, that was still far less effort than hovering in the air. Power consumption measurements indicate savings of up to 77%, and there are a lot of potential venues for tuning still awaiting future exploration. Among them is to better understand interaction with ground effect, which is something we’ve seen enable novel designs. This isn’t exactly the flying car we were promised, but its development will still be interesting to watch among all the other neat ideas under development to keep multirotors in the air longer.

END_OF_DOCUMENT_TOKEN_TO_BE_REPLACED

The dumbest thing this week is Uber’s flying car concept of the future. The braintrust at Uber envisions a world of skyports, on rooftops or on the ground that will handle 200 takeoffs and landings per hour. That is 4800 per day at a maximum. The record for the number of total takeoffs and landings for any airport was set last year at Mumbai’s Chhatrapati Shivaji airport with 969 takeoffs and landings in a twenty-four hour period. Yes, Uber wants to put the world’s busiest airport in a parking lot or something. Just wait, it gets dumber. Uber’s ‘flying car’ looks like a standard quadcopter, but with stacked, non-contrarotating props, for safety. These aircraft will be powered electrically, although it’s not quite clear if this is a hybrid setup (which could actually be practical now, but without regulatory precedent) or something built around an enormous battery (impractical for anything bigger than a 152 in this decade).

This aircraft is just a render, and Uber expects it to be certified for commercial flight in two to five years. This is nearly impossible. Uber plans to fly these aircraft autonomously. This will never happen. Additionally, Uber will not manufacture or design the aircraft. Instead, they will partner with a company that has experience in aerospace — Bell or Embraer, for instance — making the render a moot point, because ultimately Uber is just going to go with whatever Bell or Embraer have on the drawing board. Uber’s entire business plan is “move fast and break laws”, which will not serve them well with the FAA. The mere mention of Uber’s self-flying car has lowered the level of public discourse and has made us all dumber.

Espressif is getting investment from Intel’s venture capital division. Espressif, is, of course, the company behind the incredibly popular ESP8266 and ESP32 chipsets designed for the Internet of Things. Before the ESP8266 module popped up for sale on SeeedStudios, no one had heard of Espressif. Intel, on the other hand, is the largest semiconductor company on the planet and recently exited the maker IoT space because of the complete and utter failure of the Curie, Joule, Edison, and Galileo product lines. I would bet a significant portion of Intel’s failure was due to their inability to release datasheets.

Awesome news for synth heads. Behringer is cloning just about every classic synth and drum machine. At Superbooth 2018, Behringer, manufacturers of the worst mixers on the planet, revealed their clone of the Roland SH-101 synthesizer. It’s called the MS-101, and yes, it has the keytar grip. Also announced is a clone of the TR-808, Odyssey One, the OB-Xa, Arp 2600, and M100 modules. Here’s some context for you: a good Detroit techno show consists of an SH-101, TB-303, TR-808 and TR-909, all made by Roland in the 80s. These vintage synths and drum machines, at current prices, would cost about $10,000, used. The prices for these clone synths haven’t been announced, but we’re looking at a Detroit techno show for $1000. That’s nuts. Here’s a video of the 808.

I could have sworn that we have asked this one before, but perhaps I’m thinking of our discussion of nuclear aircraft. In my mind the two share a similar fate: it just isn’t going to happen. But, that doesn’t mean flying cars can’t happen. Let me make my case, and then we want to know what you think.

[Steve] sent in a link to a Bloomberg article on Larry Page’s suspected investment in personal flying cars. It’s exciting to hear about test flights from a startup called Zee.Aero with 150 people on staff and a seemingly unlimited budget to develop such a fantastic toy. Surely Mr. Page is onto something and tiny 2-person vehicles will be whizzing up and down the airspace above your street at any moment now? Realistically though, I don’t believe it. They definitely will build a small fleet of such vehicles and they will work. But you, my friend, will never own one.
END_OF_DOCUMENT_TOKEN_TO_BE_REPLACED 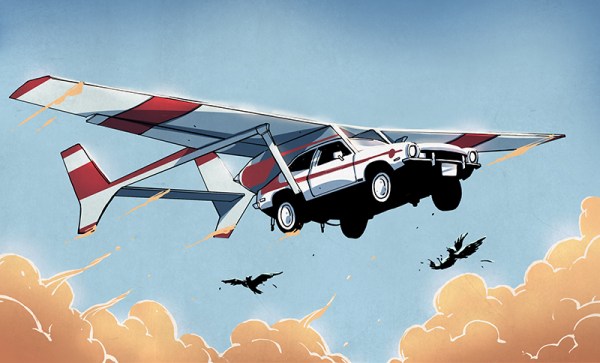 Anyone who has ever been stuck in gridlock has probably daydreamed about pushing a button on the dashboard that turns their car into a plane. Imagine how much more relaxing a weekend getaway would be if you could take to the open sky instead hitting the congested highway. For as long as there have been aircraft and automobiles, man has tried to combine the two. The proper term for this marriage is ‘roadable aircraft’, and a successful one requires attention to the aerodynamics of flight as well as the rigors of motoring.

One promising attempt at a roadable aircraft came from Henry Smolinski, an aeronautical engineer in Van Nuys, California. He along with his friend Harold Blake started a company in 1971 called Advanced Vehicle Engineers (AVE) to produce the AVE Mizar. This flying car combined the lightweight Ford Pinto with the wings and partial fuselage of a Cessna Skymaster.