We don’t see many wire wrapped circuits these days, and you could be forgiven for thinking it was nearly a lost art at this point. But that doesn’t mean the technique can’t be applied elsewhere. [MiHu-Works] recently wrote in to share a sign they recently made for a client’s restaurant that looks an awful lot like the back panel of a homebrew computer to us. 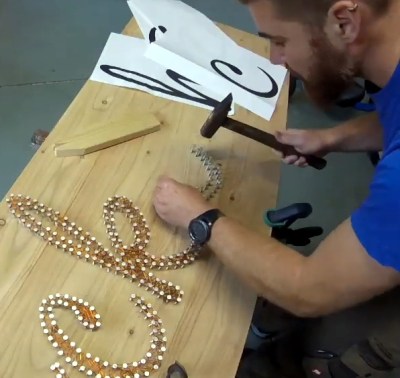 Before you get a chance to scroll down and complain about it in the comments, we admit this one is fairly deep into the crafts side of the spectrum. But it’s also a gorgeous piece that we’d be happy to hang up in the hackerspace, so we don’t care. There might not be any angry pixies zipping around through all that lovingly wrapped copper wire, but it certainly feels like you’re looking at the internals of some complex machine.

To make it, [MiHu-Works] first printed out the lettering on paper and put it on the wood to serve as a guide. Roofing nails were then driven into the wood to create the outline of the text. A simple tool made from a forked piece of wood was placed under the head of each nail as it was hammered in to make sure the depth was consistent. It also made sure there was adequate room underneath to wrap the copper wires through them. Then it was time for the wrapping…so much wrapping. (Who is going to come through with the robot to do this?)

A few years back we asked the Hackaday readers if they thought the days of wire wrapped circuits were over. It generated a lot of discussion and interesting ideas, but looking at projects like this, perhaps we were asking the wrong question.