Whether you’re a programmer, gamer, writer, or data entry specialist, the keyboard is an extension of your nervous system. It’s not so much a tool as it is a medium for flow — for being in the zone. So I think it’s only natural that you should care deeply about your keyboard — how it looks, how it sounds, and above all, how it feels to finger-punch those helmeted little switches all the live-long day. That’s my excuse, anyway.

It might surprise you that mechanical keyboard switches can be modified in a number of ways. Depending on what you want from your keyboarding experience, you can make switches feel lighter or less scratchy, quiet them down, or tighten up any wobble in the housing. Why would you want to do this? Because customization is fun. Because electromechanical things are awesome, and because it’s fun to take switches apart and put them back together again. Because it’s literally hacking and this is Hackaday.

I got into switch modding because I wanted to put Cherry clears in my dactyl, but worried that they would take too much force to actuate and wear my fingers out. So I bought some really light (39g) springs and was really looking forward to swapping them into the clears, but they just don’t work. Like, physically. Slider goes down, slider gets stuck. It will come back up, but only if I hit it again and smear my finger to the side a bit at the same time. Those springs must be too weak to return clear sliders.

I took this as a sign that I should suck it up and use browns instead. After all, no one else has to know what my sliders look like. While I was opening switches, I tried out one of these super-light springs in a brown, thinking maybe they wouldn’t have to go to waste. Not only did the lighter spring work in the brown, it felt pretty nice. It’s hard to imagine how a whole keeb would feel based on a single switch, but if you can gather a handful and snap them into a plate to riffle your fingers over them, well, it’s probably close enough to a full keyboard to get a good feel for whatever mod you’re doing. 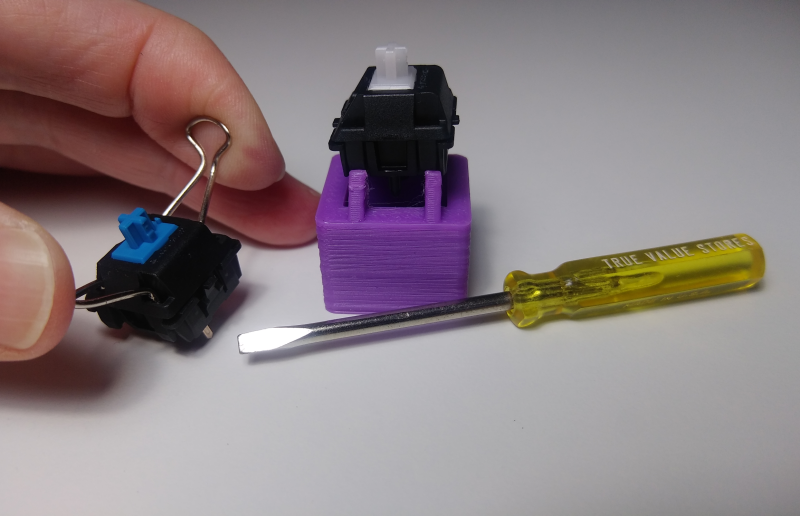 Please note that I only have experience modding Cherry MX switches and their perfectly cromulent clones, so that’s what I’m gonna talk about here. There are a few notable differences between the two, especially in the way the housings are designed.  A tool that opens a Cherry won’t necessarily open a clone switch.

There are a bunch of ways to open switches in general. You can use a tiny flat head screwdriver to open most any kind of switch, as long as you know where to put it. I printed a switch opener that made it through about 10 switches before one of the teeth broke off. The second one lasted much longer after I switched from shoving switches squarely down on the teeth to working the teeth under the switch housing clips one side at a time.

Then I came across the bent binder clip method. I think it’s really fun to do it this way, but the method is a bit on the brute force side. If you liberate the spring steel handles from a binder clip, you can bend the ends into a little tool that opens switches from the top like a pair of keys. These are a little difficult to make without a real, bolted-down bench vise, but I managed by holding it in place with locking pliers and doing my bending with regular pliers.

A Little Cushion for the Pushin’ 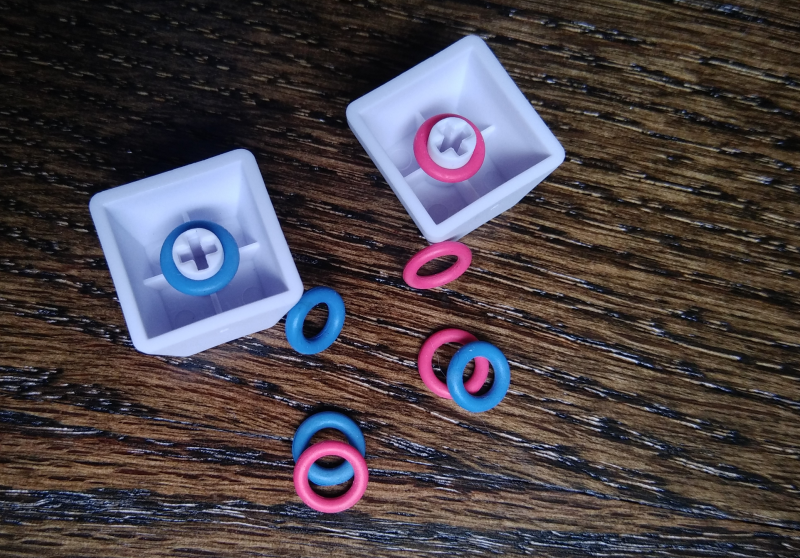 Most mods must be done with loose switches, but not all. Don’t want to go through all the trouble of pulling or de-soldering all the switches on your daily driver? That’s understandable. Some keyboard noise comes from bottoming out — pushing the keys all the way down when typing. About the easiest and most reversible thing you can do to mod a switch is pull off the keycap and stick an o-ring on the keycap stem. You can even use those tiny rubber bands meant for orthodontia. If they feel too mushy, all you have to do is pull the keycap again and try another size of o-ring.

Some people like the feel of clicky switches like blues and greens but they can’t stand the clicky sound. Or maybe they grow tired of the sound after awhile, or they love the sound but everyone else is breathing down their necks about that awful machine-gun keyboard. Clicky switches get their clicks in different ways, and some of them can’t be quieted without losing the feel that comes with it.

Clicky Cherry MX switches are kind of special, because they are also built to be tactile. They have an extra piece of plastic on the stem called a click jacket. If you feel like spending the time and aren’t afraid of opening switches, you can make a clicky Cherry MX more like a sharp tactile by putting a little piece of rubber called a j-spacer between the slider and the click jacket. This is called a jailhouse mod, and it works by immobilizing the click jacket. The tactile bump is still there, but the noise is dampened.

Clicky Kailh switches work very differently. Instead of an extra piece of plastic on the slider, there’s a horizontal spring-loaded bar that gets plucked by a protrusion on the shaft of the slider. You’re pretty much stuck with o-rings to quiet most of these types of switches down, but o-rings don’t do anything against clickiness. They will still function with the click bar removed, but since that thing does double duty, the feel will be linear.

Are you a gamer or a speed typer who feels slowed down by your keyboard? Are your fingers tired at the end of the day? If you don’t mind opening switches, changing out the springs is something that’s easy to do and completely reversible. Lighter springs can make a huge difference in the way a keyboard feels.

I’m replacing the stock springs in my Cherry browns because I want the lowest-force possible typing experience without sacrificing tactility. The stock brown springs actuate somewhere around 45-50g of force, and the new ones only take 39g.

If you’re not so much into experimentation, there are a couple of well-known spring mods among the community, such as Ergo Clears — Cherry MX clear sliders with springs from reds, blues, or browns. These are so well-liked that there is now a commercial version called Zealios. 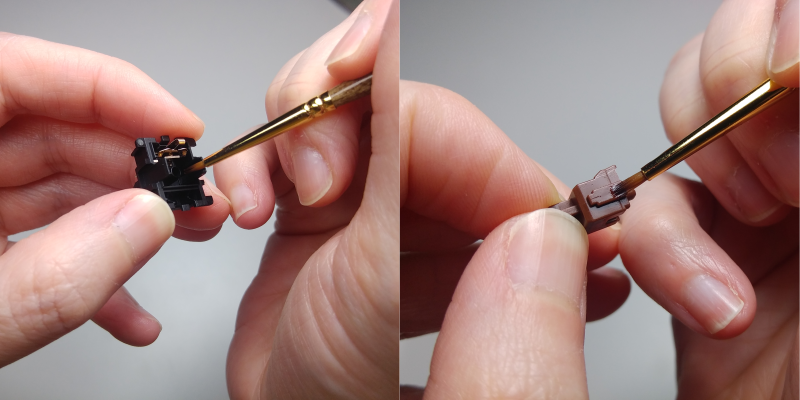 This is where things get serious and irreversible. A little lube can go a long way, especially if you’re using a grease and not a liquid. It all depends on what the switch is like to begin with, and what you want out of it.

Lubing switches is a bit of a slippery slope. I don’t say that to discourage anyone away from trying it — quite the opposite, in fact. I suggest easing into it slowly, trying the least amount of lube in the fewest places, and adding more until it feels like you want it to feel.

You can see above where I lubed the browns for my dactyl. I only applied it to the business parts of the slider and the corresponding rails inside the housing. I didn’t want to overdo it and make the switches feel mushy. The other places that make sense to lube are up inside the slider where the spring goes, the floor of the housing where the other end of the spring goes, and the spring itself. I’ve heard that some people straight up soak all their springs in lube and pull them out with tweezers. 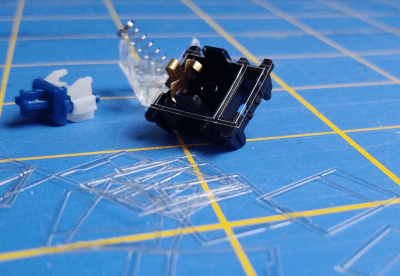 These are basically the same thing, except that switch films are generally a little bit thicker than stickers, and stickers are adhesive whereas films are not. Both of them serve the same purpose — reducing wobble in your switch housings.

I thought films would be easier to work with than stickers, and better overall because of the material. I found it was true until I tried to put the switches back together and found myself wishing the films were stuck down.

Some say that switch wobble and the subsequent need for gaskets is an invented problem. I disagree. If your switches are PCB-mounted and rely on solder joints for stability instead of snapping into a plate first, there’s definitely room for wobble. Switches break in over time, and there are always going to be switches that get used more than others. I would also posit that taking switches apart to add lube or change out the spring might introduce wobble. If switch stickers or films work for you, what’s the harm? Who cares? They’re cheap, and they come in a bunch of nice colors that will peek out all around the edge of the housing.

Do What You Feel

How many more n00bs could you pwn if every key press felt like perfection? How much more work could you get done if typing became something to look forward to? The point of all of this is to personalize the feel of your keyboard, meaning that nothing is really set in stone except that some stuff physically won’t work. Inventing your own mods is part of the fun. So go crack open some switches!