For the purposes of this discussion, the Otto cycle, the Atkinson cycle, and the Diesel are all four-stroke engines. This means that for every pulse of power produced, the pistons move four times, the crankshaft rotates twice, and ignition occurs once. These four strokes are called intake, compression, power, and exhaust, or as they’re known colloquially, suck, squeeze, bang, and blow.

The differences in these engines lie in the number and shape of the moving parts, the air and fuel intake schemes, and the ignition of the fuel. As a jumping off point for the purpose of discussing the four strokes in general, let’s look at the typical gasoline-powered internal combustion engine found in many cars, aka the Otto cycle engine. 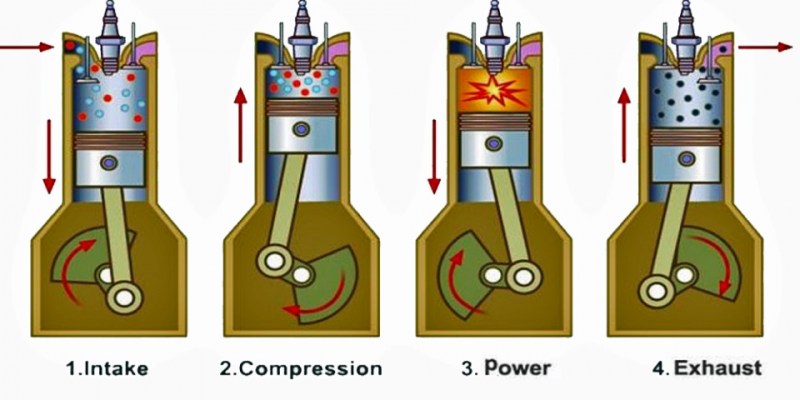 During the intake stroke, the piston moves downward toward bottom dead center, and the cylinder fills with a fuel and air mixture from a valve at the top of the cylinder. On the compression stroke, the piston moves back up toward top dead center and squeezes the air-fuel mixture, compressing and heating it up. Power is produced when the spark plug sparks, igniting the compressed air-fuel mixture and forcing the piston back downward, which turns the crankshaft a second time. Finally, the piston moves back toward top dead center on the exhaust stroke and pushes the spent air-fuel mixture out through the exhaust port. The speed at which the engine does this is anywhere from 600 to 1,000 revolutions per minute (RPM) at idle to the point where a given consumer gasoline engine redlines — usually somewhere around the 5,500-7,000 RPM mark.

The more pistons an Otto cycle engine has, the smoother it will run. The main advantages of the Otto cycle engine are that it doesn’t burn much oil, it’s fuel efficient, and has fewer harmful emissions than Diesel engines. One of the main downsides is that these engines have a lot of moving parts, and when they fail, they tend to fail spectacularly.

Atkinson cycle engines have been around since the late 1800s and are commonly found in hybrid cars today. The Atkinson is a four-stroke internal combustion engine much like the Otto cycle, but there’s a big difference: the intake valve stays open during the first part of the compression stroke.

It may sound wasteful, but that air-fuel mixture isn’t just lost through the open intake — it gets pushed into the next piston, preheated and ready to burn. Since variable valve timing wasn’t a thing yet, the original Atkinson cycle engines used a linkage to vary the piston timing.

The expansion ratio of the Atkinson cycle engine is greater than the compression ratio, which means it’s more efficient. It has less power, but when paired with an electric motor, the two complement each other. Other advantages are reduced pumping losses — pumping in air and fuel and pumping out exhaust takes work, and less power is needed to perform these functions.

Rudolph Diesel’s engine is also a four-stroke, but it does things a little differently. During the intake stroke, the cylinder only takes in air — no fuel. The compression stroke squeezes the air and heats it up to ~1300 °F. At the beginning of the power stroke, fuel is injected into the cylinder where it ignites instantly amid the hot air, forcing the piston downward. The exhaust stroke is the same — the spent air-fuel mixture is vented out the exhaust valve.

The interesting thing about the Diesel is the lack of spark plugs. They don’t need ’em — compression heats up the air enough that when the fuel is injected, it explodes without needing a spark. Diesels have better fuel economy than Otto cycle engines, but they cost more to buy and maintain than gasoline-engine cars. Diesel fuel is often more expensive, too.

Because they are compression-ignited, Diesel engines have a higher compression ratio (and longer cylinders) than gasoline engines. This produces more torque, which is good for heavy loads, but the cost comes in a slower takeoff speed.

Here’s where things get really interesting. Felix Wankel developed his rotary engine in the 1950s based on a dream he had as a teenager. Instead of pistons and cylinders, a Wankel rotary has one big rotor with three sides moving in an oval-shaped housing. The rotor is connected to an eccentric shaft, and the because of its design, the engine converts combustion pressure directly to rotating motion of the eccentric shaft.

The Wankel is a compact engine with fewer moving parts. It utilizes the same four strokes, but only in the thermodynamic sense — the rotor and the eccentric shaft are the only parts that move. The eccentric shaft acts like a crankshaft, delivering power to the drive train.

Wankel engines are smoother-running and can rev higher, but they are designed to burn oil in order to keep the internal seals lubricated. As you might imagine, this means they have terrible emissions.

The jaw-dropping thing about the rotary x-engine is the amount of power relative to the size. For example, LiquidPiston demonstrated their engine to the Army by building a Compact Artillery Power System (CAPS) generator to power the digital fire control system on an M777 howitzer.

Today, the system requires a generator that needs a truck to move it around. LiquidPiston built one that weighs 41 pounds (18.6 kg) and is roughly the size of a gaming PC. The Army was so impressed that they awarded LiquidPiston a Small Business Innovation Research contract to further develop the generator for “a range of military use cases”.

If you want to understand how the Rotary X-engine works, take almost everything you know about the Wankel and turn it inside out. The Wankel has a triangular rotor in an oval housing, and the Rotary X has an oval-shaped rotor in a triangular housing. Both engines only have two major moving parts — the rotor and the shaft.

Each of the three housing chambers in the Rotary X is comparable to a piston. The intake and exhaust ports and chambers are built into the rotor itself. For every revolution of the rotor, there are three combustion events. This engine is able to be so small and efficient because LiquidPiston redesigned the thermodynamic cycle to squeeze out more power. The video below explains it quite well.

Will we ever see these engines in consumer cars? Maybe someday, but a lot has to happen before then. More than likely, it would take a major manufacturer to adopt the technology and put it in a car the way Mazda put Wankels in RX-7s and 8s. Even then, it’s not guaranteed to take off, although LiquidPiston says they are suited to be either the primary engine or part of a hybrid system.

LiquidPiston are offering x-mini development kits starting at $30,000, but you have to promise not to reverse-engineer it. However, there’s probably enough information out there to make a 3D printable version, so we’ll be waiting to see what you come up with.