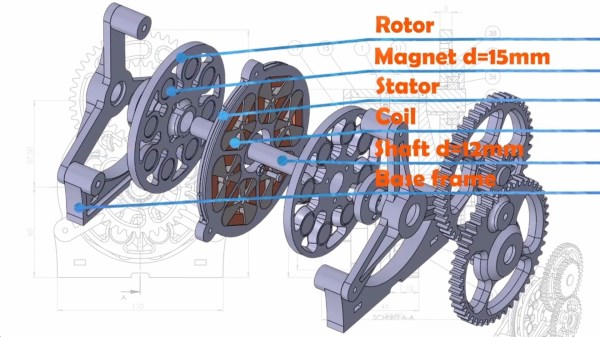 Sometimes we build to innovate, and sometimes we build just to have the satisfaction of saying we made it ourselves. Yet there is another reason to construct something ourselves: To learn, just as [Fraens] has done with this 3D-printed generator. (Video, embedded below.)

[Fraens] starts off with a jig for winding the individual coils, but then the jig itself snaps into a the stator ring. The stator ring is sandwiched by two rotors which rotate on a brass shaft suspended by needle bearings. With the exception of the hardware, all the structural parts are 3d printed.

What really separates the generator build isn’t how it’s built, but rather how [Fraens] has put it to use as tool for learning and experimentation. By plotting input torque vs electrical output, [Fraens] is able to calculate efficiencies in multiple configurations, and has some interesting conclusions to share toward the end of the video. We appreciate how the documentation and analysis help iterate the design towards higher efficiency and will inform the next build.

With some more work, we can see this going straight into a Vertical Axis Wind Turbine or attached to a Pelton Wheel for an off-grid hydro-power setup. Thanks to [Shabab] for the great Tip!

END_OF_DOCUMENT_TOKEN_TO_BE_REPLACED 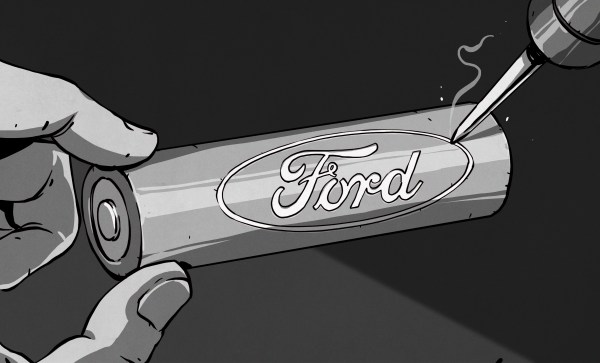 All those cells have to come from somewhere, of course, and many are surprised to learn that automakers don’t manufacture EV batteries themselves. Instead, they’re typically sourced from outside suppliers. Today, you get to Ask Hackaday: why aren’t EV batteries manufactured by the automakers themselves? END_OF_DOCUMENT_TOKEN_TO_BE_REPLACED 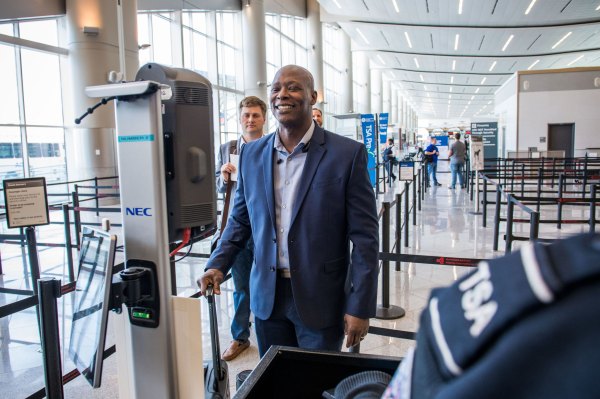 It was discovered last month that a South Korean government project has been providing millions of facial images taken at Incheon International Airport to private industry without the consent of those photographed. Several civic groups called this a “shocking human rights disaster” in a 9 Nov press conference, and formally requested that the project be cancelled. In response, the government has only promised that “the project would be conducted at a minimum level to ensure personal information is not abused”. These groups are now planning a lawsuit to challenge the project.

Facial information and other biometric data aren’t easily altered and are unique to the individuals concerned. If this data were to be leaked, it would constitute a devastating infringement upon their privacy. It’s unheard of for state organizations — whose duty it is to manage and control facial recognition technology — to hand over biometric information collected for public purposes to a private-sector company for the development of technology.

The program itself wasn’t secret, and had been publicly announced back in 2019. But the project’s scope and implementation weren’t made clear until a lawmaker recently requested documents on the project from the responsible government agencies. The system, called the Artificial Intelligence and Tracking System Construction Project, was a pilot program set to run until 2022. Its goals were to simplify the security and immigration screening of passengers, improve airport security, and to promote the local AI industry in South Korea. If the project proves successful, the plan is to expand it to other airports and ports in the country.

Current systems at the airport do one-to-one facial recognition. For example, they try to determine whether the face of the person presenting a passport matches the photo in the passport. The goal of this new project was to develop one-to-many matching algorithms, which can match one face against the plethora of faces in an airport, track the movement of a face within the airport, and flag “suspicious” activities which could be a security concern.

The groups protesting the project note that the collection and sharing of these images without the travelers’ consent is prohibited by the Personal Information Protection Act, the South Korean law which governs such things. Under this act, a project like this would ordinarily require consent of the participants. But the government’s interpretation relies on an exception in the act, specifically, Article 15 Section 3, which states:

The breakdown of the numbers above reveals that 57 million Korean citizens are in the data set, a bit surprising to many since the collection of biometric data on Korean citizens at immigration is prohibited by law. The project circumvented this by only collecting data from citizens who participate in the automated Smart Entry service, a voluntary program which uses fingerprints and facial recognition. It’s interesting to note that the number of passengers using Incheon airport since May 2019 (the program was announced 30 Apr 2019) is only 62 million, so the average passenger appears approximately three times in the data set.

Are there any similar programs in your region? How do they handle the issue of consent, if at all? Let us know in the comments below.

[Banner image: “Customer uses facial recognition as identification at TSA security checkpoint” by DeltaNewsHub, CC BY 2.0  — Yes, it’s from another country with similar problems, but much less public outcry. Discuss in the comments!] 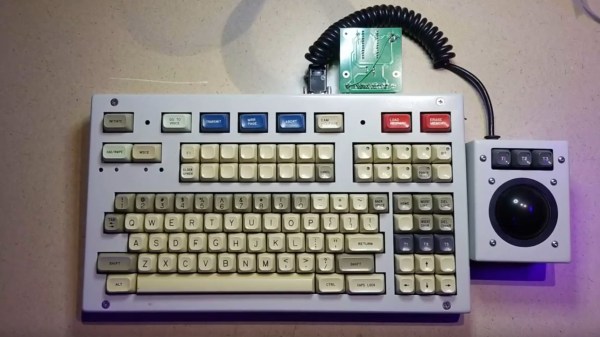 When [jns] and their colleague came across an industrial or possibly military grade keyboard/trackball combo on eBay, their minds did the same backflips that yours or mine might. Enthralled by the specialty key caps, the custom layout, and companion trackball adorned with its own keys rather than buttons [jns] and his workmate they did the only thing that infatuated hackers can do: They each bought one! [jns]’s goal? Make it work via USB.  Everything’s been documented in both software and in a very well done video that you can see below the break.

After doing some digging, they found that the keyboard and trackball combination was used in Minuteman III nuclear missile silos beginning in the early 1990’s, when the REACT program replaced aging cold war era computers and communications systems with simpler, more flexible systems.

In the video, [jns] goes into more detail about the discovery of reed switched keys, the RS422 protocol being used, blowing up an Arduino Pro Micro, and even repairing the aging trackball. Success was had, and he’s graciously shared the software and hardware design with the world.

If industrial and military grade control hardware gets your hacker juices flowing, you’ll not want to miss that time we covered a control console from a nuclear power plant for sale. Have you been working on any tantalizing, weird, obscure keyboards or equipment with far too many buttons and blinkenlights for your own good? Be sure to let us know about it via the Tip Line!