We’ve all heard it said, and it bears repeating: getting to space is hard. But it actually gets even harder the smaller your booster is. That’s because the structure, engines, avionics, and useful payload of a rocket only make up a tiny portion of its liftoff mass, while the rest is dedicated to the propellant it must expend to reach orbital velocity. That’s why a Falcon 9 tipping the scales at 549,054 kilograms (1,207,920 pounds) can only loft a payload of 22,800 kg (50,265 lb) — roughly 4% of its takeoff weight.

As you might imagine, there’s a lower limit where there simply isn’t enough mass in the equation for the hardware necessary to build a fully functional rocket. But where is that limit? That’s precisely what aerospace newcomer Astra is trying to find out. Their Rocket 3 is among the smallest orbital boosters to ever fly, closer in size and mass to the German V2 of World War II than the towering vehicles being built by SpaceX or Blue Origin. Even the Rocket Lab Electron, itself an exceptionally svelte rocket, is considerably larger. 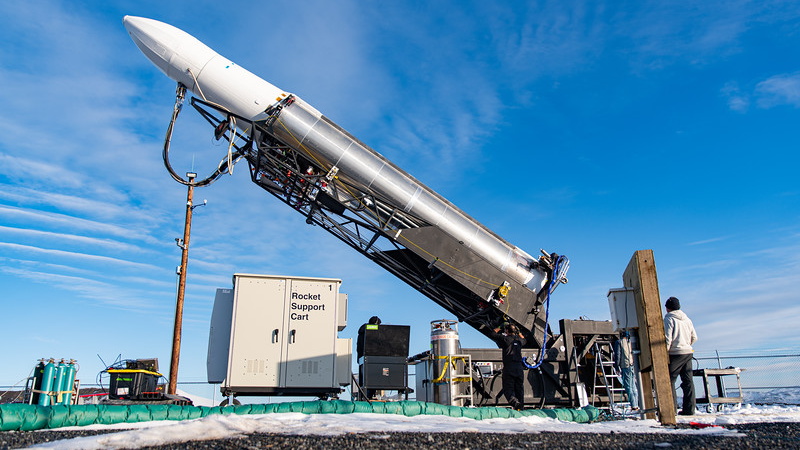 The reason they’re trying to build such a small rocket is of course very simple: smaller means cheaper. Assuming you’ve got a payload light and compact enough to fit on their launcher, Astra says they can put it into orbit for roughly $2.5 million USD; less than half the cost of a dedicated flight aboard Rocket Lab’s Electron, and competitive with SpaceX’s “rideshare” program. Such a low ticket price would have been unfathomable a decade ago, and promises to shake up an already highly competitive commercial launch market. But naturally, Astra has to get the thing flying reliably before we can celebrate this new spaceflight milestone.

Their latest mission ended in a total loss of the vehicle and payload when the upper stage tumbled out of control roughly three minutes after an otherwise perfect liftoff from Cape Canaveral Space Force Station in Florida. Such issues aren’t uncommon for a new orbital booster, and few rockets in history have entered regular service without a lost payload or two on the books. But this failure, broadcast live over the Internet, was something quite unusual: because of the unconventional design of Astra’s diminutive rocket, the upper stage appeared to get stuck inside the booster after the payload fairing failed to open fully.

To understand this failure, we have to take a step back and look at the design of a conventional multi-stage rocket. While an oversimplification, it would be fair to say that the upper stage is generally just a smaller version of the first stage. It will be shorter in length, perhaps more narrow in diameter, and have fewer engines; but fundamentally its design will resemble that of its larger counterpart. The payload is mounted to the top of the upper stage, which in turn is enclosed by an aerodynamic fairing or nosecone.

But Astra’s Rocket 3 is unique in that its second stage looks nothing like the first. Rather than a sleek rocket, its design is more reminiscent of a satellite; with exposed tanks and a skeletal structure that would never survive flight through the dense lower atmosphere. Since this stage will be traveling through the wispy upper atmosphere where drag isn’t a concern, Astra decided to strip it down to the bare essentials to reduce its mass.

The downside of this design is that the fragile upper stage must be covered until the rocket has gained considerable altitude. So rather than placing just the payload into a protective aerodynamic fairing, the entire second stage needs to be enclosed. The lower portion of the second stage is tucked into the hollow interstage, and an elongated fairing makes sure the payload and its ride to space aren’t exposed to supersonic airflow in the early phases of flight.

The beauty of this design is that the material used to construct a payload fairing, usually carbon fiber or fiberglass, is exceptionally lightweight. Even taking into account the additional fairing length required, the overall weight ends up being lower than if the second stage had a more traditional rigid fuselage.  That said, there’s a glaring problem with this approach if you’re looking to build the cheapest rocket possible: producing these lightweight payload fairings is very expensive.

In fact, in a 2020 interview with Ars Technica, Astra co-founder Chris Kemp admitted the astronomical cost of carbon fiber fairings forced the company to abandon them in favor of aluminum for Rocket 3. Rather than spending $250,000, Kemp said the team at Astra was able to produce them in-house for just $2,500. That’s a huge cost savings for such a low-cost vehicle, but the trade-off is that the new metal fairings weigh 20% more than the originals.

The switch to heavier aluminum payload fairings means the mass savings of Astra’s unique second stage design isn’t quite as substantial as was originally intended. In practice this likely resulted in a hit to the total payload capacity of the vehicle, but it was still deemed the right call from a cost standpoint. But given this recent failure, perhaps the change had larger implications that are only now becoming apparent.

Looking at the live video from the February 11th launch, we can clearly see the chain of events that led to the upper stage losing control and ultimately failing to enter orbit. At almost exactly three minutes into the flight the payload fairing visibly shudders, but fails to open. Four seconds later the second stage, propelled forward by a spring-loaded mechanism, slams into the fairing but fails to knock it loose. Finally, at three minutes and eleven seconds into the mission, the second stage’s engine ignites while still inside the interstage. This build up of pressure blows off the fairing, but unfortunately also destabilizes the second stage and sends it tumbling.

We can clearly see what happened, but the task for Astra is now to figure out why it happened. The Alameda, California based company is still working their way through an investigation with the Federal Aviation Administration (FAA), and as of yet haven’t released any public statement as to why the payload fairing didn’t  open properly when commanded.

But that doesn’t mean we can’t speculate as armchair engineers. Could it be that the mechanism used to separate the payload fairing needs to be made stronger due to the added mass of the aluminum? One also wonders if the lighter carbon fiber payload fairings might have given way once the second stage smashed into them, potentially saving the mission. In any event, one thing is for sure: Astra’s low-cost rocket seems to have a knack for failing in unusual ways.