We’ve always been big fans of the Arduboy here at Hackaday. When creator Kevin Bates showed us the original prototype back in 2014, the idea was to use his unique method of mounting components inside routed holes in the PCB to produce an electronic business card that was just 1.6 mm thick. But the Internet quickly took notice of the demos he posted online, and what started as a one-off project led to a wildly successful Kickstarter for a sleek handheld gaming system that used modern components and manufacturing techniques to pay homage to the 8-bit retro systems that came before it.

It’s the sort of hacker success story that we live for around here, but it didn’t end there. After the Kickstarter, the Arduboy community continued to grow, thanks in no small part to Kevin never forgetting the open source principles the product was built on.

He took an active role in the growing community, and when some Arduboy owners started tinkering with adding external storage to their systems so they could hold hundreds of games at a time, he didn’t chastise them for exploring. Instead, he collaborated with them to produce not only a fantastic add-on modification for the original Arduboy, but a new version of the Arduboy that had the community-inspired modifications built in.

Now Kevin is back with the Arduboy Mini, which not only retains everything that made the original a success, but offers some exciting new possibilities. There’s little doubt that he’s got another success on his hands as well as the community’s backing — at the time of this writing, the Kickstarter campaign for the $29 USD Mini has nearly quadrupled its funding goal.

But even still, Kevin offered us a chance to go hands-on with a prototype of the Arduboy Mini so that anyone on the fence can get a third party’s view on the new system. So without further ado, let’s take a look at how this micro machine stacks up to its full-sized counterparts.

It might seem silly to say for a product that has Mini right in the name, but the Arduboy Mini is seriously small. Just imagine how small you think it is, and go a bit lower than that. At approximately 50 mm x 35 mm (2 in x 1.3 in), it’s small enough to be a keychain charm — in fact, the hole at the bottom left of the PCB  seems to almost be begging for a split ring. I wouldn’t recommend it though, unlike the tough plastic and metal enclosure that protects the full-sized Arduboy, the Mini is just a bare PCB. It’s not hard to imagine some of the components on the back getting ripped off, or the OLED coming loose.

As I said in the intro, the Mini strikes me as an effort to distill the Arduboy experience down to its very core, and part of that is tossing away anything left behind. You’ve still got the same ATmega32U4 running the show to ensure software compatibility with existing games, now paired with 16 MB SPI flash chip to store them, but outside of that there’s almost nothing on the Mini that isn’t there for the express purpose of playing games. There isn’t even a power button on the thing, you simply plug in a USB-C cable and it instantly springs to life. 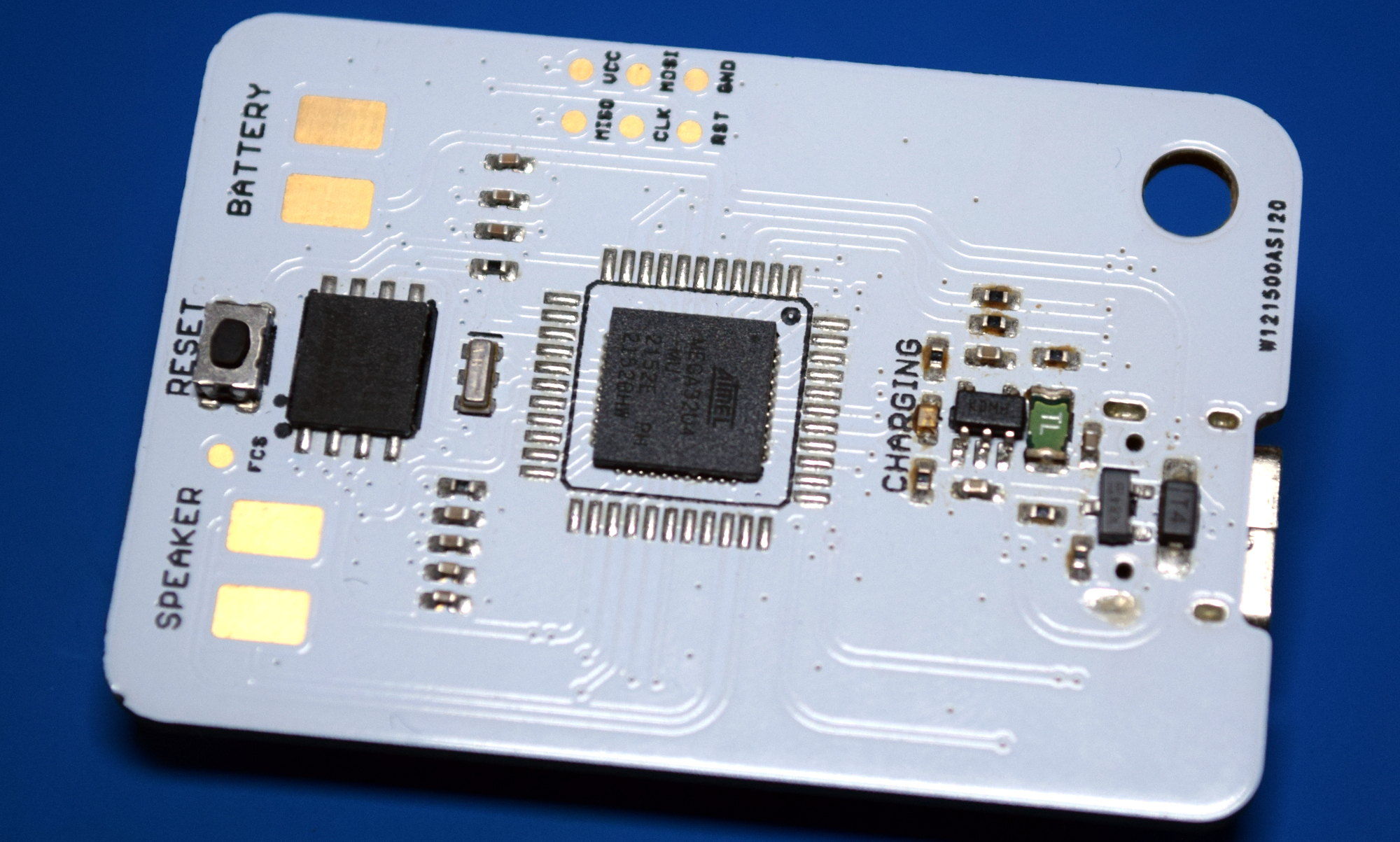 Speaking of which, you’ve probably noticed there’s no battery onboard. You can only play the Arduboy Mini when its plugged in, and though the cord doesn’t exactly get in the way, it does make it feel less like a portable system. Sure you can use some kind of USB power bank on the go, but it still reminds me of trying to play my Game Boy with the AC adapter as a kid: a workable solution in a pinch, but one that never quite feels natural.

Also axed in the Mini — the speaker. Normally this would be an inexcusable admission for a gaming device, but having played my fair share of games on the original system, I can tell you that audio design has never been a high priority for most Arduboy developers. Many games don’t have sound in the first place due to the limitations of the hardware, and the ones that do are generally little more than bleeps and bloops.

That being said, there are a few games, such as the phenomenal Arduventure (a game so good, a special edition Arduboy was released to commemorate it) that have music and sound effects good enough that you’ll miss them. There’s also a small collection of music-based games and tools which obviously aren’t going to be playable on the Mini. So while it’s admittedly a far smaller problem than it would be with almost any other system, it still does sting a bit.

Built to be Hacked

That being said, the keen-eyed reader may have noticed that there are pads on the back of the Arduboy Mini PCB for both a battery and speaker — that’s because Kevin has decided to leave their addition as an exercise for the more advanced user. While the official position is that the Mini doesn’t need either of those things to be a compelling portable game device, he’s made sure the option is still there for those that want it. 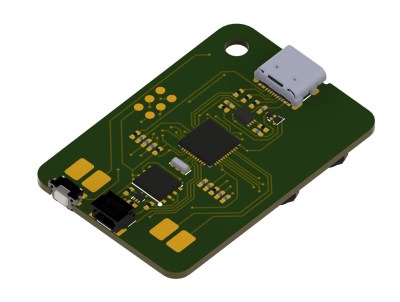 But speakers and batteries aren’t the only thing that can be connected to the Arduboy Mini. While this prototype version doesn’t have it, Kevin is currently working on a new version of the PCB that will feature an I2C Qwiic connector.

The details have yet to be finalized at the time of this writing, but the idea is that this will allow additional hardware to be plugged into the Mini without having to solder anything on the board, which will be a huge benefit for those who wish to use the cheaper Mini in an educational setting, where the original hardware enjoys a considerable following.

Personally, I love the idea. The original Arduboy was a great way to make teaching software development fun for younger students, and this new capability could now bring hardware into the mix. It’s easy to imagine a school buying up a bunch of Arduboy Minis for their STEM classes and using them to easily interface with off-the-shelf modular components. Even for grown-up hackers, the Mini would make an awesome tool for quickly visualizing sensor data.

Finally, as you might expect given the fact the Arduboy Mini is a bare PCB, there’s naturally going to be plenty of folks who want to produce their own enclosures for the device. It will be interesting to see what kind of different cases get developed over time, and to get the ball rolling, Kevin will be providing STLs for a basic 3D printed case which can be modified however you see fit.

Alright, I know what you’re thinking. Sure there’s all these cool little details about the new variant of the Arduboy hardware, but what you really want to know is what it’s like to play games on the thing.

To that end, I’d have to say that the standard Arduboy is more pleasant from an actual gameplay standpoint. It’s more comfortable in the hand, the screen is much larger, and while they aren’t strictly necessary, I certainly do miss the speaker and battery being built-in. If you’re in the market for an Arduboy simply because you want to play games, then the existing FX model is almost certainly the better choice for you.

But if you’re interested in something you can fiddle around with, then the Mini is unquestionably the more exciting prospect. Customization has been woven into the DNA of the Mini, so whether you come up with a custom amplified sound system to bolt onto the back or just spin up your own 3D printed enclosure, you’ve really got the opportunity to make the system your own. Then there’s the possibilities offered by the proposed I2C interface, which simply isn’t an option on the original hardware.

Choose Your Own Adventure

If you’re new to the Arduboy world and looking for the ideal gaming experience, the Arduboy FX just can’t be beat. It’s extremely portable, and with the built in storage for hundreds of games, allows you to bring hours of entertainment wherever you go. It’s like returning to a bygone era of gaming, except from some alternate timeline you don’t actually have any memory of.

On the other hand, if you’re more into the hacking and development side of things, the Mini is an awesome little platform. I can also see it being extremely popular with existing Arduboy owners, who already know which games lend themselves to the short duration pick-up-and-play style that the smaller system is better suited for.

Then again, when you can get both systems for less than $100 bucks total, who says you even have to chose? There’s no in-app purchases, subscription fees, or nagging ads. Just a community of awesome people making fun games, and the best part is, you can join them and create your own handheld masterpiece for free. Long live the Arduboy.